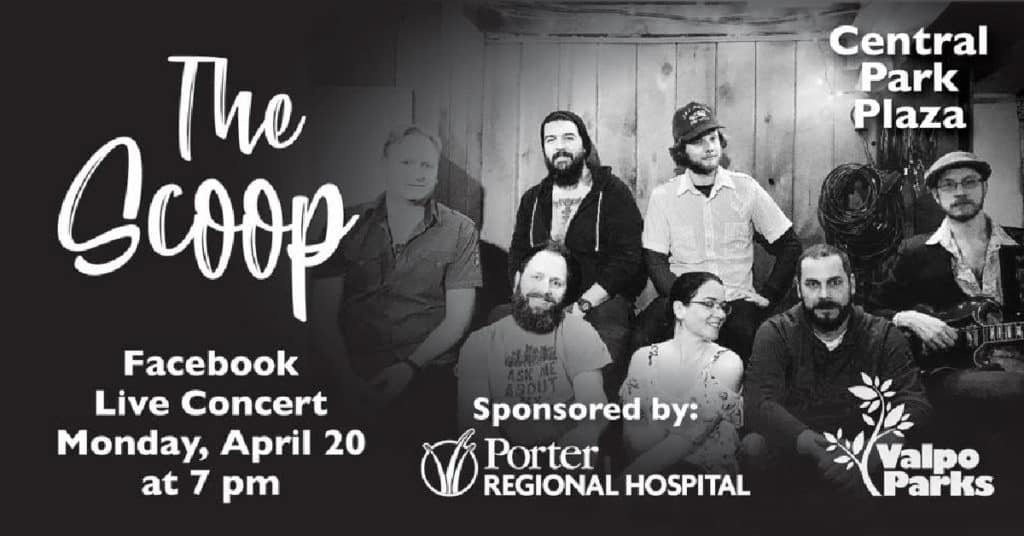 The universal language of humankind – music – is getting a lot of people through these unusual times, and the Region’s favorite local artists have a message: We’ll keep playing if you’ll keep listening.

Local musicians are making their way into living rooms with live digital tiny concerts, and while it’s not the same as performing in person, the trend has become an outlet for thousands who look forward to grooving away their worries, even if only for a little while.

One of the latest developments during the pandemic has been the onset of Valpo Parks launching the Central Park Plaza concert series, bringing local musicians right to your living room from the Plaza's Facebook page. It's the next best thing to gathering in person at this favorite pavilion.

The series, sponsored by Porter Regional Hospital the series features local musicians or bands who are welcome region favorites and are missing their usual opportunities to perform live. Musicians who are interested in particpating can email Central Park Plaza Director Dan McGuire at dmcguire@valpo.us to inquire about availble slots.

Upcoming Central Park Plaza shows include Dan Reisen on April 18 and The Scoop on April 20.

Those who have been missing local favorite Johnny V and his cherished Neil Young style music can catch concerts from his Facebook Page, and on other pages like Craeft House in Chesterton. They're planning a livestreamed show in their Facebook Page on April 17.

“The arts are a beautiful distraction. People are bored, scared, and uncertain. Music and art help you escape and take your mind off of some of this for a while,” said Chad Clifford, owner of Front Porch Music and frontman for The Crawpuppies, among other music ventures. “Plus, listening to music is more productive than arguing about politics on Facebook with that guy you hardly knew in high school.”

“The arts and local music scene play an important role in our local community and family and friends around the world. There’s a tremendous amount of joy that can be experienced through the arts,” said musician Jason Murphy.

“It has also given me the opportunity to get quite a bit more exposure and make many new connections that may have been more difficult in the physical sense due to limited geographic mobility,” Cicco said.

Lately, he’s played a Virtual Thursday concert from the Fish Camp Facebook page and also plays on his own Facebook page from time to time.

The adjustment of performing live online as opposed to in-person, with loud fans enjoying libations and cutting a rug in whatever space is available, has been significant for some.

Chris Sulcer a musician and member of the popular duo Chris and Lou, is still grateful to have the opportunity and an outlet to play.

“It took me a little while to get warmed up to the idea. It’s really strange playing to a camera when you’re used to interacting with real people,” he said. “It’s not always song after song. We’ll talk about funny things that have happened in the past or even current events or TV shows. It’s hard to do that while playing live on social media, but once it gets going, it’s fun. You kind of forget that you’re in a room by yourself.”

Lou Samaniego, a songwriter and producer, considers himself a live musician above all and may dabble in online shows, but his in-studio work with original music has virtually stopped, so he hopes everyone can take a moment to remember the value of music.

"I think the arts, in general, are so woven into our lives that we really don't even notice them until they're in jeopardy. In my case with music so many memories are tied to specific times in my life. And I'm sure that's like that for most other people. It's like you can almost smell that time period just by hearing a particular song," he said.

Local musician Dan Reisen is happy to provide an outlet for people who might not have had the chance to get out and see live music in general.

"The coolest part about doing Facebook Live for the first time is that many people who would love to come out and have seen me perform in the past, finally have a chance to see me play live.  Either they work too early or late, have kids, which makes it difficult to come out, or are older and cannot physically make it out. This is a really awesome way for them to appreciate and enjoy my music live the comfort of their own homes," he said.

He's enjoyed playing some charity shows for various causes since the pandemic began and has a few more coming up. He also plans to play live each Friday night via his Facebook page.

"People have surprisingly been overly generous and appreciative.  I’ve gotten a fantastic response through tips and verbal affirmation of their approval during these tough times.  The music brings great joy to not only myself, but many families who are cooped up for so long as well," Reisen said.

While most viewers are likely missing the in-person shows of Chris & Lou and others, some who are more introverted by nature are finding it more engaging to watch from afar.

“I get star struck with anyone who is holding a guitar,” laughed Jenny Slager, who loves to watch online concerts. “It’s so easy to tune in and you can just type your request and the next thing you know, he’s playing your favorite song, and it feels like it’s a concert – just for you.”

Clifford has taken to Facebook with his Live from Clifford’s Irish Pub shows.

“For me, it has been amazing. People are generous and seem to really enjoy a sense of normalcy that comes form tuning in. I like the feedback and the feeling that I’m able to still work and do what I love. Plus, I keep in touch with many who mean so much to me,” Clifford said.

In a recent project, he invited his musician friends from all over the world – locally and otherwise – to collaborate on a distance-shared production of John Lennon’s “Imagine.”

Countless posts from families and individuals across the nation are pointing to how the arts are helping them stay happy at home.

“One of my favorite musicians had a sign on his Instagram page that said the following: ‘If you think artists are useless, try to spend your quarantine without music, books, poems, movies, and paintings.’ I think that pretty much sums it up,” Cicco said.

The music-makers of tomorrow are still in the making during this pandemic as well. In fact, it might be a good time to think about taking up an instrument.

“We are doing Skype and FaceTime lessons at Front Porch Music,” Clifford said. “It has been a struggle for sure, but we are trying our best. I worry about many of my co-workers, but musicians are a resilient bunch. ‘We will get by, we will survive’ is my current motto.”

Local performers are looking ahead, though, to brighter days.

“I’d like to tell fans that we miss them just as much as they miss us and to please keep watching all of the local musicians on social media,” Sulcer said. “When we’re able to get back to normal, please come out and see us and maybe even recruit some new live music fans to come with. Festivals, restaurants, and bars are going to need the support.”

“Try to use the time wisely. Write a song. Learn an instrument. Paint a picture. Get back to a simpler life and rediscover love,” Clifford said. “Someday, we will tell our grandkids about these days. They will look at us and think, ‘Great. Here he goes with those old stories of 2020.’”

This weekend, turn off your news alerts on your devices, grab a beverage, and plan your next in-home concert with your favorite local musicians. Better yet, clear a space on the floor and dance, too. If you love what you hear, consider saying thanks if the musician has a virtual tip jar available. Either way, the tunes are flowing, so you just need to get online and go with it.