During August, NWI Innovators of the Month shines the spotlight on Society Members – Lee Botts and the groundbreaking “Shifting Sands” film; Shrimp Farmers Scott and Leslie Tysen; PNW’s Mont Handley and the Commercialization and Manufacturing Excellence Center; and IUN Medical School’s Prof. Ernie Talerico, Ph.D. Highlighted below is the impact in NWI and beyond of the film “Shifting Sands – On the Path to Sustainability.” Also featured are farmers Scott and Leslie Tysen with their daughter Jillian who run a commercial shrimp farm named JT Shrimp, LLC. All are being celebrated as part of the 2016 – 2017 Class of Innovators, the largest group inducted into The Society of Innovators. The Society is part of Ivy Tech’s Gerald I. Lamkin Innovation & Entrepreneurship Center for Excellence. Contact O’Merrial Butchee, Director, Lamkin Center at (219) 981-4942, or John Davies, Managing Director, Society of Innovators at (219) 981-1111, 2292. 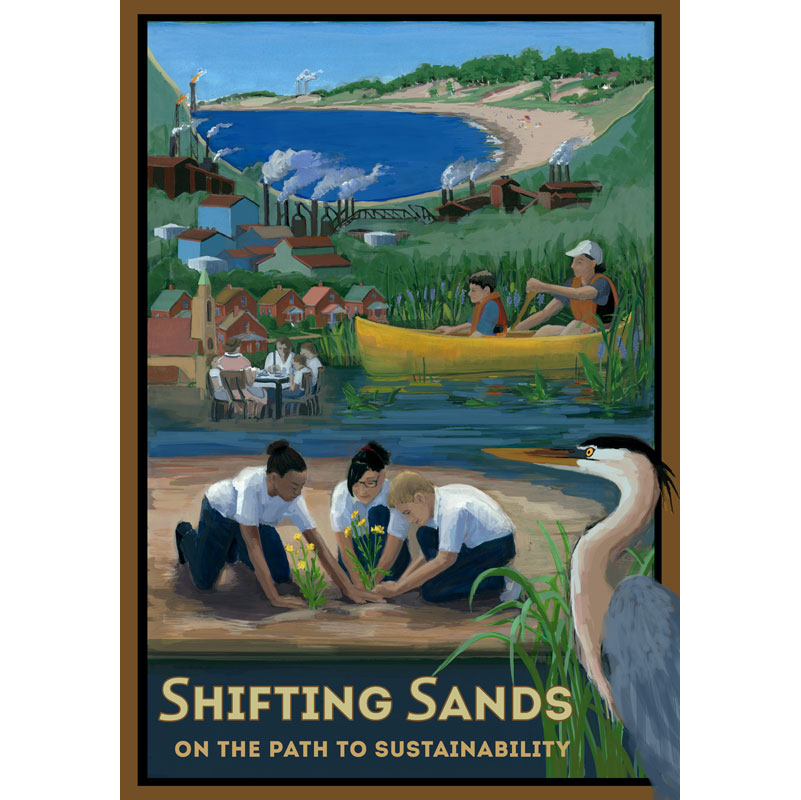 ‘Shifting Sands’ Tells Story of Environmental Rebirth in NWI!
For those who believe that everything has been invented, discovered or learned can take a lesson from Lee Botts who teamed up with a videography team to tell the story of the environmental rebirth of our region rimming Lake Michigan. Lee worked with video producers Pat Wisniewski, Rana Segal and Tom Desch to produce the groundbreaking “Shifting Sands – On the Path to Sustainability.” This film tells the 100-year saga of collision between industrial and environmental interests that evolved into a national model of collaboration and cooperation among industry, regulatory agencies, communities and environmental groups. The purpose of the film is to make people aware of what is happening today in the community given the convergence of goals and efforts of economic development interests with environmental protection interests to achieve sustainability. “Thanks to the convergence of so many efforts – from pollution control to restoration and cleanup – this region where environmental and industrial interests had so often collided is now becoming a test case for the idea of sustainability.” Since launched on 2016 Earth Day, the film was nominated for an Emmy, and has been shown on more than 300 PBS stations nationwide. Planned this fall is the distribution of a curricula for schools to take the story of sustainability to students. For details, click on shiftingsandsmovie.com. 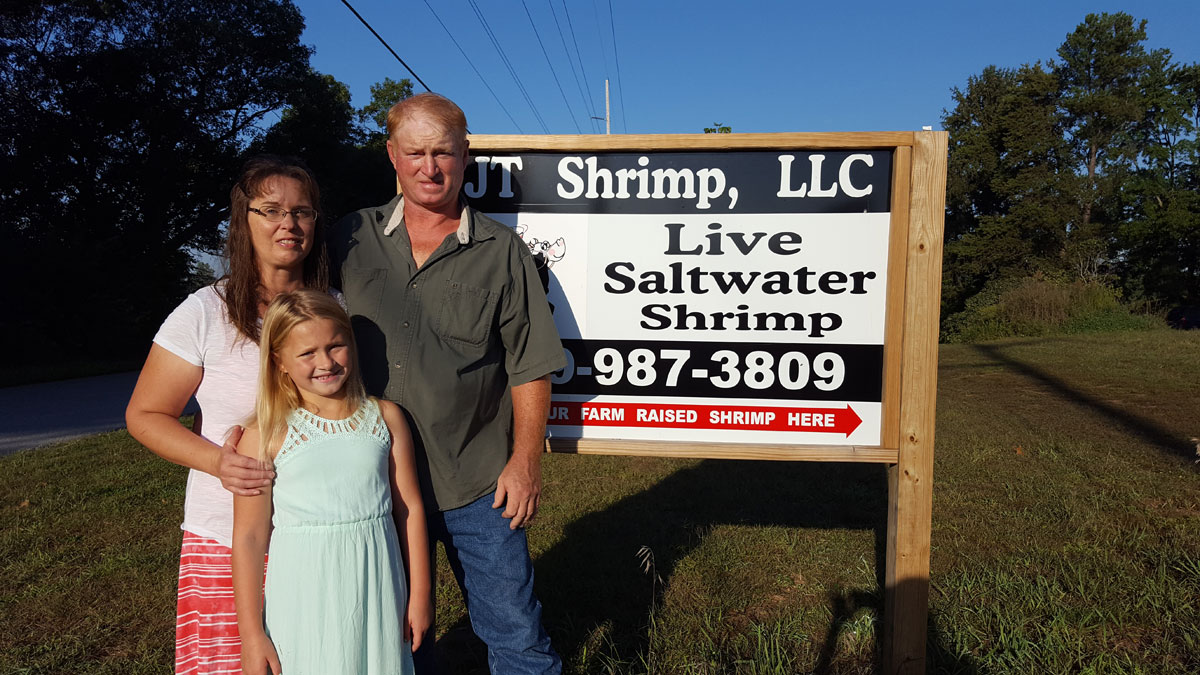 JT Shrimp LLC Emphasizes Sustainable Agriculture in Wheatfield
Like any farmer, Scott Tysen is up at 5 if he is lucky, and depending upon the day, sometimes a lot earlier. Still, he and his wife Leslie are doing something different! They’re raising live salt water shrimp on the family farm. Scott describes it as sustainable agriculture that is healthy for the consumer. They founded JT Shrimp LLC in Wheatfield about four years ago. JT Shrimp gets its name from their daughter Jillian, who helps at Farmer’s Markets on weekends. They raise their shrimp inside a 4500 sq. foot barn. This shrimp farm is likely the only one in Northwest Indiana and one of a handful in Indiana. The Tysens have a zero exchange heterotrophic system designed to raise the “freshest saltwater shrimp in the area,” Scott says. To supplement farming, both Scott and Leslie work other jobs. “When consumers tell me that ours is the best shrimp they’ve eaten, that makes all this worthwhile.” It’s no accident that the shrimp is clean and sweet. The Tysen’s shrimp is raised inside in nine large tanks, with each tank holding about 4,000 shrimp. No hormones, chemicals or antibiotics are added, making their shrimp healthier. This makes the water as close as possible to a shrimp’s natural habitat, minus the pollutants. As they have perfected their product, their goal is to sell their shrimp to area restaurants. Call 219 987-3809 for details about sales and tours.

Highlighted below is Society Team Member Mont Handley highlighting how the Commercialization and Manufacturing Excellence Center of Purdue University Northwest benefits Entrepreneurs like Troy McCloskey, who launched a startup called Fair Oaks Farm Fresh Delivery. Also featured is Society Fellow Ernie Talarico, Ph.D. of IU Medical School – Northwest focusing on how his Talarico Protocol has repositioned the “first patents” of medical students by returning the patient to the focus of medicine “early in the education program.” Innovators featured come from Jasper, Lake, La Porte, Newton, Porter, Pulaski and Starke Counties. The mission of The Society of Innovators is to cultivate creativity and innovation as a growth strategy by discovering and encouraging, celebrating, educating and honoring our most innovative people across Northwest Indiana. Click on www.nwisoi.org for details. 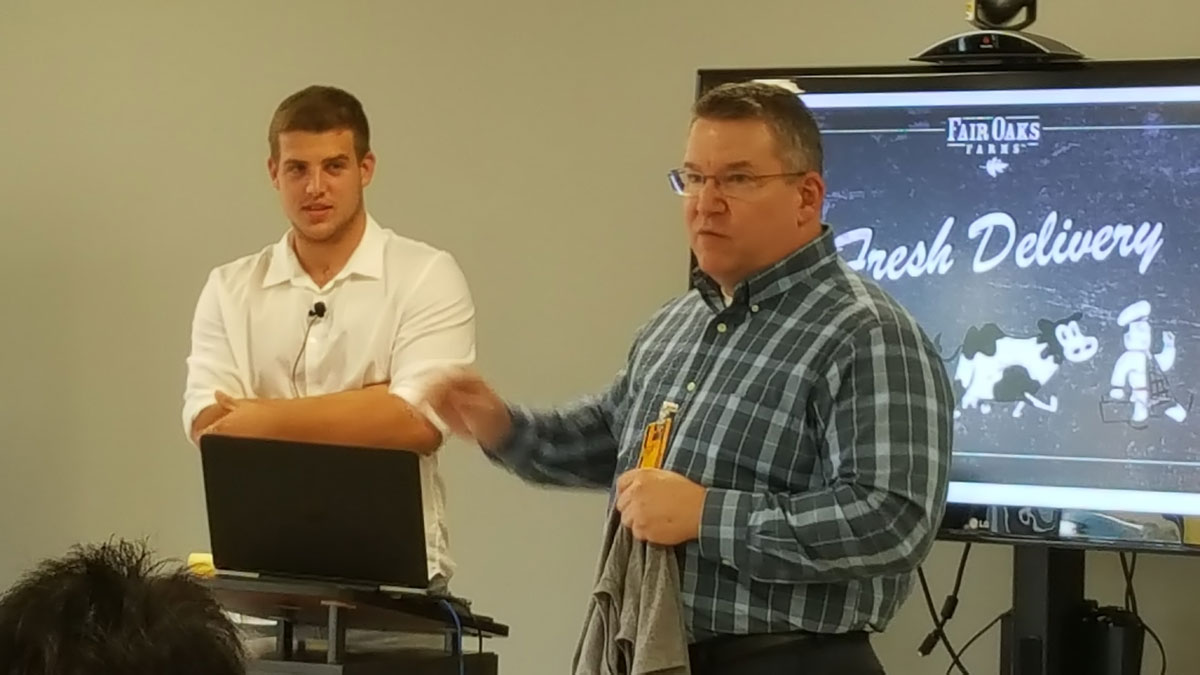 CMEC Has Dual Mission at Purdue University NW!
The Commercialization and Manufacturing Excellence Center (CMEC) at Purdue University NW has a dual mission to commercialize new innovations and to train workers and start-up entrepreneurs in automated manufacturing processes and troubleshooting. CMEC’s Concept to Commercialization (C2C-2020) program provides an entrepreneur-in-residence co-working space and mentoring. It addresses prototype development, patenting assistance, explores seed funding opportunities like the Small Business Innovation Research (SBIR) program, and will provide temporary space for scaled, proof-of-concept manufacturing analysis. C2C-2020 thereby creates and nurturers a culture of business development, especially for start-ups manufacturers. This has strong support from a broad variety of public and private stakeholders; and, has partnerships with diverse organizations that support a regionally specific, manufacturing incubator. Such a resource will allow participating entrepreneurs to grow, scale, and diversify the manufacturing base and economy of the region. Current data shows that for each new job created for manufacturing, 3.4 additional jobs are created in both the upstream and downstream supply chains. Shown above is CMEC Executive Director Mont Handley (right) with Fair Oaks Farm Fresh Delivery Entrepreneur Troy McCloskey. 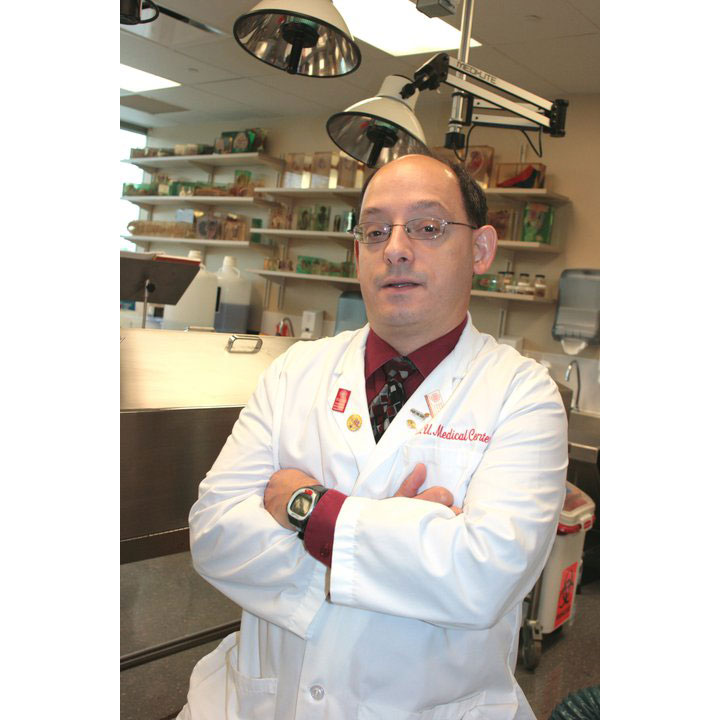 Talarico Protocol That Focuses on the ‘First Patient’ Goes Global!
The “Talarico Protocol for Human Gross Anatomy” was established 18 years ago as part of the International Human Cadaver Prosection Program at the Indiana University School of Medicine-Northwest. Ernest Talarico, Jr., Ph.D., Associate Professor of Anatomy & Cell Biology, observed that students of medicine and allied health had lost focus - concentrating on books, numbers and symptoms - instead of the “total patient”. His unique approach breaks from tradition and puts students in intimate contact with the families of those “first patients” that they are dissecting in the anatomy laboratory, thereby returning the patient to the focus of medicine early in the education program. Students not only learn anatomical structures, but also learn empathy, compassion, professionalism and communication skills that will make them great healthcare providers, and they maintain bonds with families of anatomical donors that grow throughout and beyond the medical school years. These bonds extend far into their careers effecting favorable patient outcomes and relationships. Recently, Talarico and collaborators published the book, Commemorations and Memorials – Exploring the Human Face of Anatomy. This book, the first of its kind, examines the emerging phenomena of relationships with the “first patient.” Talarico’s philosophy and teaching methods are being duplicated at medical schools in other countries.