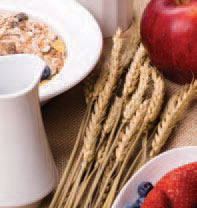 Eating gluten-free can be challenging, in part because it isn’t always easy to spot gluten-containing ingredients on your plate. Unsuspecting eaters are surprised to learn that there’s gluten in lunchmeat, in soy sauce and salad dressing. Here are some guidelines to help you spot the gluten in everyday foods.

Foods that are gluten-free

Many grains and starches can be part of a gluten-free diet. In general, you can eat foods containing the following grains and starches: amaranth, arrowroot, buckwheat, corn and cornmeal, flax, gluten-free flours (like rice, soy, corn, potato, or bean), hominy, millet, quinoa, rice, sorghum, soy, tapioca, and teff.

The following foods are generally gluten-free, however you should check to be sure they aren’t processed or mixed with gluten-containing grains or additives.

To avoid gluten, do not eat food and drinks that contain wheat, barley, rye, and triticale (a cross between wheat and rye). Be aware of the many types of wheat flour on supermarket shelves – bromated, enriched, phosphated, plain and self-rising. Also avoid the following wheat products: bulgur, durum flour, farina, graham flour, kamut, semolina, and spelt. Oats are often contaminated with wheat during growing and processing stages of production, so doctors and dietitians generally recommend avoiding oats unless they are specifically labeled gluten-free.

The following should be avoided, unless they’re specifically labeled gluten-free: