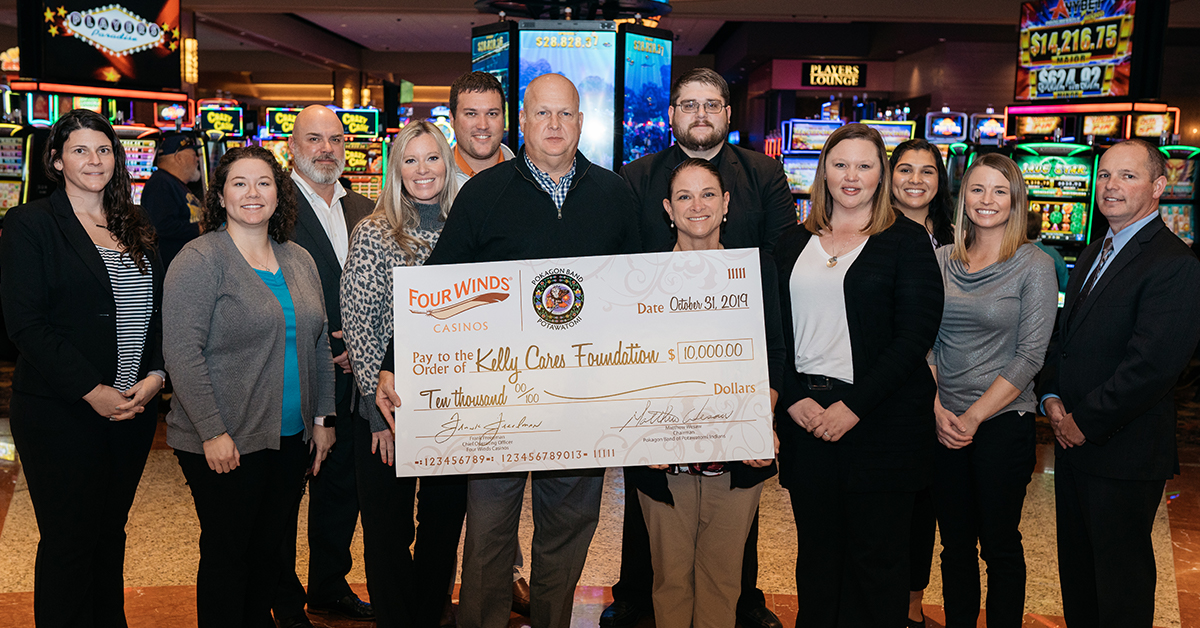 It was a stellar year for the Four Winds Casino Pinktober community outreach initiatives, culminating in a $10,000 donation to the Kelly Cares Foundation after employees and guests supported a variety of activities to raise money for breast cancer awareness and programming.

The Pokagon Band of Potawatomi Indians’ Four Winds® Casinos announced the $10,000 donation in early November. The innovative activities driven by employee participation included a breast-cancer-awareness-themed pumpkin decorating contest that raised nearly $8,200. Employees voted for their favorite pumpkins through donations and each Four Winds Casino awarded prizes to winners up to fifth place.

Guests at the casino also supported the effort by purchasing Pinktober awareness bracelets at The Rock Shop, White Birch Market, and Timber gift shops, and by purchasing the wildly popular signature Pink Shake featuring a boozy style mixed topped with strawberry sauce and a sugar cookie.

Additionally, all tips from the dueling pianos show at Four Winds New Buffalo’s Hard Rock Cafe on October 26 were donated to the effort.

“We have been making an annual donation to the Kelly Cares Foundation for several years now,” said Frank Freedman, Chief Operating Officer of Four Winds Casinos. “Each year I am continually impressed by the enthusiasm of our guests and employees to donate to the Kelly Cares Foundation, which has made a significant impact in improving health and education throughout the region.”

The Kelly Cares Foundation, now in its 11th year, has established itself as a “Playbook for Hope.” The Foundation’s mission strengthens communities and inspires hope by investing resources to improve health and education. Since its founding in 2008, the Kelly Cares Foundation has donated over $5.4 million to support causes locally, nationally and globally.

Hard Rock Cafe got in on the action, selling pins and key chains in The Rock shop to benefit the Hard Rock Heels Foundation.

Aside from generating donations, Four Winds Casinos also made breast cancer awareness a key component of their Pinktober events in fun ways. Several team members took to the field at Notre Dame Football Stadium to participate in Pink Out Zumba in support of the Kelly Cares Foundation, and Four Winds New Buffalo facilitated employee appointments for free screening mammograms.

More information on the Kelly Cares Foundation and its initiatives is available at: www.kellycaresfoundation.org. For more information about Four Winds Casinos, visit www.fourwindscasino.com.