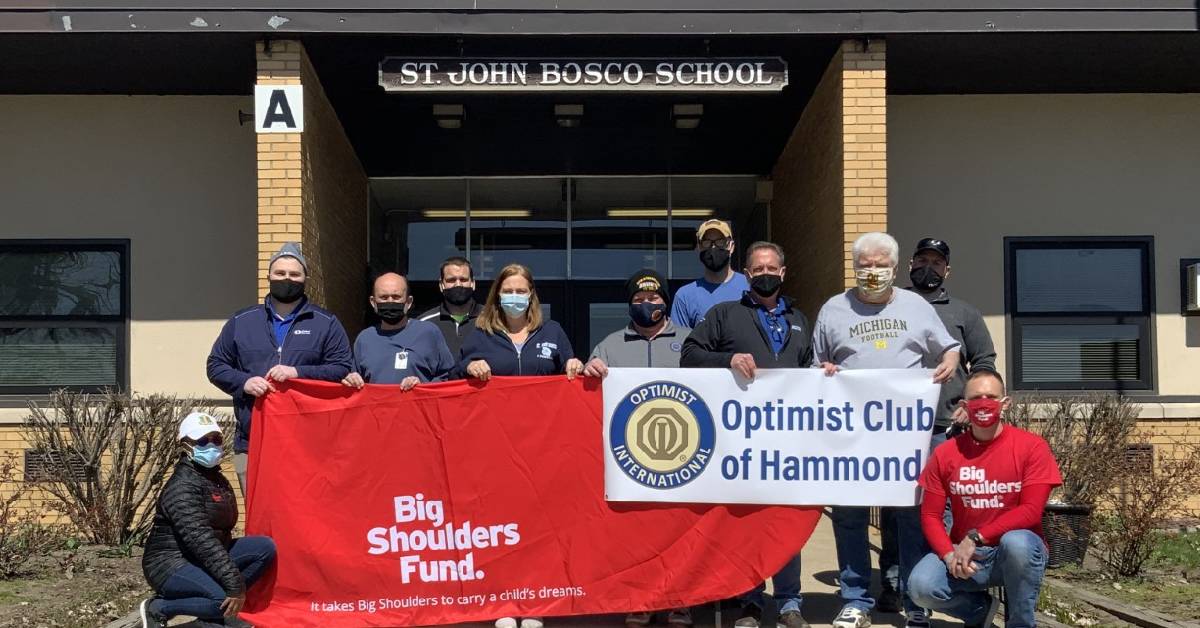 Since bringing its initiative to Northwest Indiana in 2019, Big Shoulders Fund has provided local Catholic schools and nearly 6,000 students with the vital resources and funding they need. While their services often present as tuition vouchers, scholarships, and leadership programs for educators, Big Shoulders Fund recently took on a new community project: a flooring renovation.

“In Chicago, one of the things we like to do is our ‘Give Back Days,’ which gets outside companies and organizations involved in what we do,” said Dan Kozlowski, Regional Director of Big Shoulders Fund Northwest Indiana Initiative. “We pick one of our schools and a project that the school has either always wanted to do or has had plans to do but didn’t have the resources.”

On “Give Back Days,” Big Shoulders Fund plans a day with a local business or organization to get a group of people to come out and help complete the project. For Kozlowski, these projects are more than just a way for Big Shoulders Fund to give back as they are fulfilling a need in the community that will directly benefit the next generations.

“It means so much to the school because it’s a project they’ve wanted to do for so long, but didn’t have the resources or the time to,” Kozlowski said. “It adds value, it’s fun for the organizations involved, and it gets people to see what our mission in our community is.”

Big Shoulders Fund partnered with Hammond Optimist Club after a conversation between Kozlowski and his father’s good friend, who happened to be a member of the club. Made up of local businesspeople with the goal of bringing out the best in youth through supporting local organizations, Hammond Optimist Club seized the opportunity of a partnership for the St. John Bosco project, connecting Big Shoulders Fund to United Rental Flooring.

“One thing led to another, I told him about the projects St. John Bosco was looking to do, and the club was immediately interested,” Kozlowski said. “And as luck would have it, United Rental Flooring had what we needed for floor stripping because the carpet was completely glued to old tiles.”

At the beginning of April, Big Shoulders Fund and their partners replaced the floor in about four hours, a small renovation that brightened up the school. The old carpet and tiles were replaced with a composite wood flooring that will last for years.

“People may think that it’s not a big deal, but when you see the before and after pictures and think about the students learning in that space, it’s a huge change,” Kozlowski said. “It completely changes the space and has a much more welcoming feel.”

The funding for the project came from the initial gift from the Bruce and Beth White Family Foundation that extended Big Shoulders Fund’s programming into Northwest Indiana in 2019. Big Shoulders Fund funded all material and construction costs, while United Rental Flooring provided the machinery and manpower.

“We had all volunteers, and with the donations of the equipment from United Rental Flooring, it was no cost at all to the school,” Kozlowski said.

“We don’t want there to be any pressure on companies getting involved in our projects,” Kozlowski said. “We want them to come out, have a fun day, and feel like they have done something positive for the school.”

To learn more about Big Shoulders Fund, visit their website at https://bigshouldersfund.org.