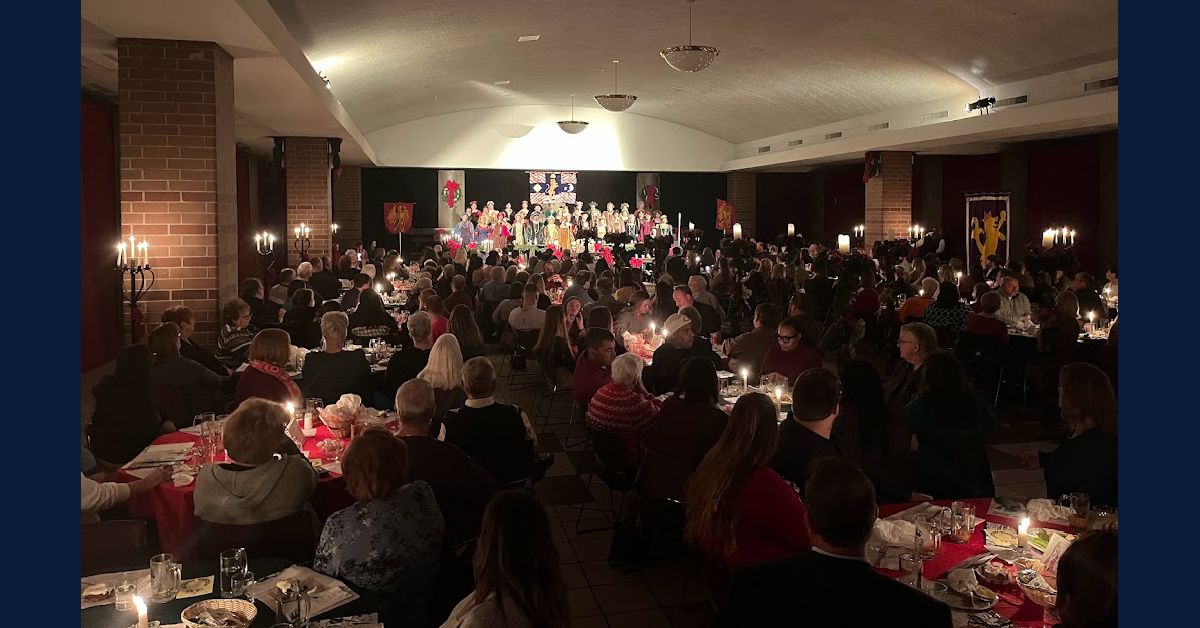 The cafeteria is transformed into the Great Hall, a replica of what a traditional medieval English dining hall would be like. Families are seated at the tables along with other parties where they eat their meals by candlelight. Walking into the cafeteria-turned-Great Hall is an enthralling experience.

At the entrance to the Great Hall was a long, deep red runner leading to the head table. The entire hall was filled with candles for light, further adding to the atmosphere. By each table were candelabras also filled with candles neatly wedged inside. Various banners and artworks with medieval lions and patterns were displayed within the Great Hall, thus producing an ancient feel to the room.

“When she [Kristin Morris, choir director] announced it, I don’t even remember it. It was surreal because it’s something I’ve wished for since my freshman year. She’s like ‘Our Lady of the House is going to be Natalie Arney,' and my face dropped. I was like ‘this isn’t real.' Honestly, I’m so honored that I got to be it, especially for the 50th,” Senior Natalie Arney, Lady of the House, said.

Those in attendance made their way from the hallway in front of the auditorium into the cafeteria-turned-medieval feasting hall. Servants led different parties to their tables after being formally announced at the opening to the Great Hall.

Families were given a choice of water, milk, or a hot mulled cider called wassail, a traditional English drink for Christmastime. For the meal, the servants brought a chicken dinner with mashed potatoes, green beans, and gravy in addition to the bread rolls with butter and charcuterie board of fruits and vegetables on the tables. As for dessert, attendees were served pieces of dense carrot cake with sweet cream cheese frosting with a choice of coffee on the side.

In between courses, the Lord of the House, Senior Christopher Woods, spoke to the audience, and was then succeeded by the members of the head table singing various traditional Christmas songs accompanied by the CHS Music Department. The Show Choir did a phenomenal job with the vocal performance. During the final song “We Wish You a Merry Christmas," the servers took the candles from each table and stood alongside those who were at the head table and stood on rises placed in the back side of the Great Hall. Every participant stood with candles at the end of the song and shouted “Merry Christmas!” and blew out the candles, leaving the entire Great Hall in complete darkness before switching on the lights.

The entire ambience of the Madrigal Dinner is an utterly magical experience. Those sitting at the head table wear traditional 16th century clothing, while people transcend through time through the senses of sight, taste, and sound.

“I got to walk in with those candles at the beginning. They were real candles, they were lit. It was real fire. The first time I got to try them was without the candles, and I could barely hold it. On one of the rehearsals, Morris was like, ‘You’ve got to try it with them lit.' So I did get to try it once before I did the show,” Senior Jorana Banseviciute, Saint Lucy, said.

The legacy of the CHS Madrigal Dinner is one that is cherished by Chesterton’s community. It is a legacy of maintaining a dazzling experience through celebrating Christmas together and fostering a communal appreciation of the arts. To remember this special experience commemorating the 50th anniversary of the Madrigal Dinner, attendees were given a complimentary mug with an emblem of a crown with a laurel wreath.

On January 21, CHS will celebrate the mid-year graduates. Nine students will be graduating from Duneland RISE Academy, a learning program that helps students to earn their diploma in a smaller environment and in a quicker manner. Duneland RISE has students from both the Trojan Virtual Academy and CHS.

Duneland RISE students have been given wooden bricks to write their names on which will be added to the Signatures of Success wall within the Duneland RISE Academy classroom.

CHS English Teacher Dakota McCoy has accomplished much with his career and education, and has greatly impacted student’s lives. McCoy teaches English to both freshmen and seniors in addition to teaching an SAT prep course and Speech.

McCoy graduated from CHS in 2011 and was active in speech and debate, theater, and the music program. Today he is still active within the respective groups as a teacher.

“I was basically in all these things that I’m still in now which is just a crazy awesome feeling,” McCoy said.

Graduating from Hanover College in Hanover, Indiana, McCoy received a degree in computer science. Once he earned his degree, he worked in the IT department for Texas Corral restaurants. During this time, he also began coaching speech and debate. While working as a coach for speech and debate, McCoy grew attached to the program and to the prospects of a teaching job.

McCoy left computer science and began working for the tutor lab at CHS. While working there, he felt more and more drawn to working in education. As he continued working as a coach for speech and debate, he enrolled in a Transition to Teaching program. After enrolling in the program, CHS had an available English teacher position which McCoy received.

McCoy was given a glass apple from the 5% Banquet, an event where students who are in the top 5% of their senior class choose an educator that has influenced them and that educator attends the banquet.

"This is the glass apple from the 5% Banquet. It's really just an honorary item, it doesn’t mean anything. But to me as a teacher, it does because I got this in 2017 when I was just starting to show up at this school from a senior debater who I was working with. Mark Wilcox and I actually think that is what inspired me to want to become a teacher,” McCoy said.

He regards being picked for the 5% Club by a student as his favorite career accomplishment, although it was prior to his career.

“As a teacher, the work you do is important; it impacts kids and it changes their lives and it pushes them in a certain direction. To be someone who is not even a teacher, not even a full-time coach, someone who just shows up now and then and gives the support that you can and have one of those kids say, ‘You are one of my top influencers to help me get where I got’ is- I was like if I can do that without being a teacher, wait until you see when I am a teacher,” McCoy said.

Junior Grae Stockhausen is both the features editor for CHS’s newspaper, the "Sandscript," and is a member of Show Choir as a Piper.

As an editor for the school newspaper, she edits all of the features-related articles, or articles that pertain to the happenings around CHS and provides feedback before publishing the articles. Originally, Stockhausen had aspirations to become a journalist after high school, but she rather enjoys partaking and contributing to the school environment.

“I get to edit articles and have a little idea of what it would be like to be on a newspaper, which was kind of my dream growing up. I feel it doesn’t suit me, but it’s really fun to do, and I feel I’m contributing to the greater good of the school," Stockhausen said.

Stockhausen is a Piper, which is the title given to upperclassmen girls within the Show Choir. However, the Pipers is also a mixed-choir, combining both males and females in one choir. Another section of the Show Choir is the Drifters, which is an all-girls choir where each female member starts out.

The Show Choir competition season lasts from January to mid spring and allows for students to travel within Indiana or go out of state to perform in a friendly competition against other show choirs.

“I think Show Choir is one of the extracurricular activities that nobody really talks about or acknowledges but is one of the biggest things that we do in our school. If there is a performance or someone singing or one of the football games, we are the ones who are singing it,” Stockhausen said.

After high school, Stockhausen has plans to attend Purdue University as a botany major and business minor.

“I think it would suit me very well, and I enjoy working at the place that I do now which is also a small business, so it might be cool to run my own,” Stockhausen said.