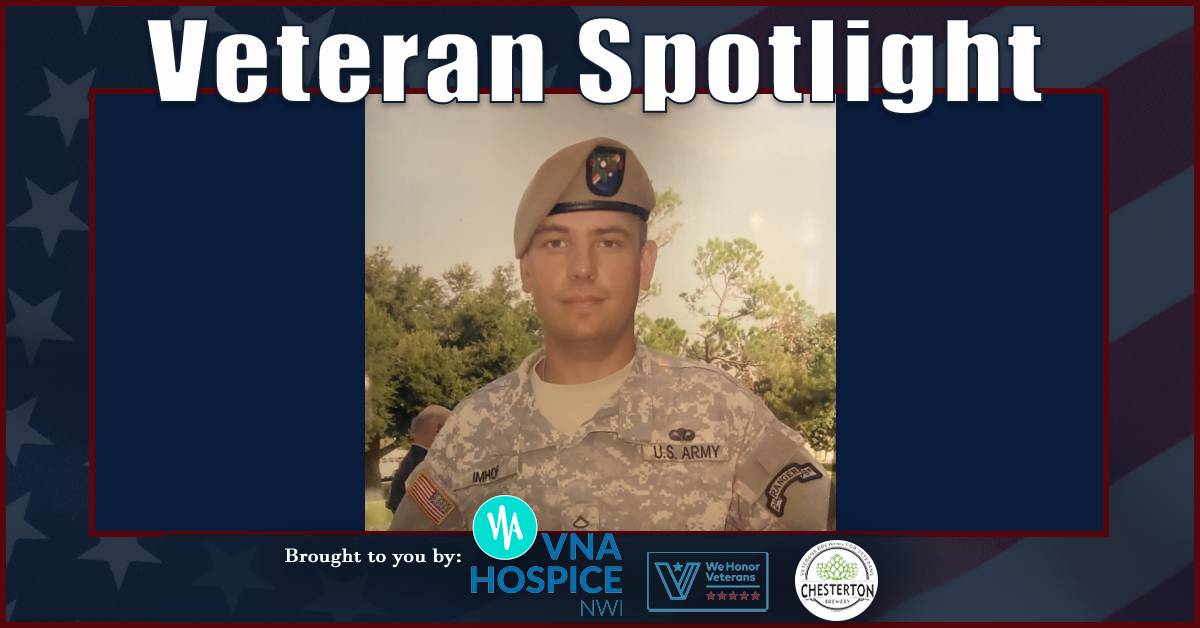 Jeff Imhof joined the Army at 24 years old to fulfill a lifelong dream to serve in the military. The events of September 11, 2001, which occurred during Imhoff’s senior year of high school, made him especially eager to join. Though he attended college after graduating, he always knew he would end up in the service.

“I did what my parents asked me to do and at least try college, and it was not a fit for me. I always kept gravitating back towards the military. So essentially, this was something that was already in the works and I just finally pulled the trigger on it,” Imhof said.

“When I enlisted, I had a specific contract called an 11X contract for special operations that afforded me the opportunity to go to infantry basic training down in Fort Benning, Georgia. I think it was 13 weeks combined. Once I graduated from basic training, I had to go through Airborne School, which was four weeks long, at the same place down at Fort Benning, and then go to try out for the 75th Ranger Regiment, which was the Special Operations Unit. That also was done down in Fort Benning, Georgia. I was successful in passing all of those things and got sent to the second Ranger Battalion in Fort Lewis, Washington,” Imhof said.

Imhof stood out from the start, and his quick progression through the ranks allowed him to attend Ranger School.

“Ranger School is a leadership school designed to test you under the most physical and emotional strain that you possibly could be put under. I guess at the end of the day, you find out a lot about yourself and a lot about other people, and how they function under those extreme conditions in order for you to be a better leader. In combat, nothing's going to be handed to you in a nice manner. People are going to react accordingly and you as a leader have to be able to contain and advise and maintain composure,” said Imhof.

Graduating from Ranger School is no easy task. Though many begin the course, few people manage to complete it.

“It started out with I think 300 people, but we only graduated with 60 or so people. it's a very low rate, and it's designed that way,” said Imhof.

Dropping out of Ranger School is a very tempting offer. Deciding to leave the school sends soldiers to a different division of the Army, and there is no punishment for not completing the course.

“The hardest part was just staying on the path because you can voluntarily opt-out,” said Imhof. “You don't have to continue. You can quit and you could get sent to what we refer to as a big army unit which is your big divisions like the 101st or 82nd. You can be sent to those units if you so choose, and it's very inviting to do that. It's probably the hardest part when you have so many options to get out, because you feel like it's so unnecessary to go through.”

Though the training was intense and extremely exhausting, Imhof feels it was beneficial to his growth during his time in the military.

“It really does serve its purpose. That's how the military picks its elite soldiers. They're going to put you through a lot of stress tests because they're more concerned about if they can trust you and if you are a good leader, and they're going to find that out when they put you under that crazy amount of stress,” Imhof said.

Imhof credits much of his perseverance to a friend he met in the early stages of training. They still have a strong bond today.

“I always had a buddy that I trusted very much with me. We would switch off days where he was going to quit and I would talk him off the ledge, and then the next day, I was going to quit. I don't think I would have survived without that dynamic. Which is the point, at the end of the day. It's learning about teamwork and the leadership aspect of it,” said Imhof.

Sergeant First Class Leroy Petry also graduated from Ranger School, and later became the second living soldier to receive the Medal of Honor. Imhof served with Petry in 2008, and says being surrounded by such impressive leadership pushed him to carry on.

“That's the type of leadership that we were working with,” Imhof said. “I was constantly surrounded by those calibers of leaders, and I've learned a lot from them. I learned how to talk to people, how to handle people, and how to conduct myself.”

Imhof was discharged from the Army in 2012, and after discovering the challenges surrounding veteran benefits, Imhof wanted to make a difference in the lives of other veterans who might be having similar issues. He found fulfillment in a position as a veterans services officer for Porter County because it gave him the opportunity to help veterans get back on their feet after being discharged.

“One of my goals is going to be to formulate some sort of program for returning soldiers to receive the help and care that they need when they get home and not put it on them to go and seek treatment. In that critical time period from when they return home, you have a small window to get them before they start sliding down a path that they shouldn't be,” said Imhof.

Imhof’s passion for helping fellow veterans has allowed him to truly relate to the people he interacts with on a daily basis. Both his experience in the service and after being discharged have allowed him to be a great link between veterans and the benefits they deserve.

“I had to jump into the position because I didn't want to see another veteran not get the proper care and attention to their case,” said Imhof. “You're talking a lot of money that can make or break these people, and a lot of times it's a lifeline for them. It's just too important of a job that I felt like was being underserved, and I had to get involved.”

To learn more about benefits available to veterans or to get in touch with Jeff, visit the Porter County Veterans Service Office website here.