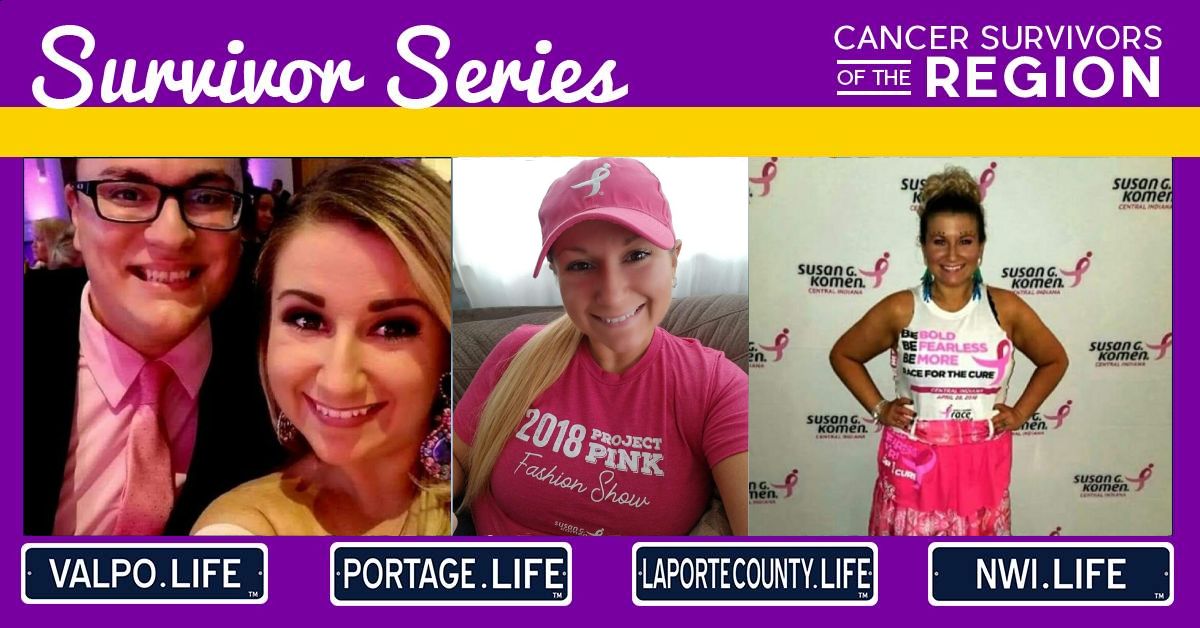 The three words no one ever wants to hear – you have cancer. For Heather Almager, being 29 at the time, hearing those words left her stunned.

Almager’s battle against breast cancer came out of left field. She and her husband had been trying to get pregnant, and even after taking fertility medication, they were unable to conceive. Heather decided to make an appointment with a fertility doctor in Indianapolis to look into it. At the appointment, regular questions were asked and typical tests were performed. However, the doctor did a breast exam, and that was what started Heather’s journey.

“The doctor told me I had a significant sized lump in my right breast,” Almager said. “He advised me to make an appointment to get a mammogram. At that point I was just shocked. I did not know what to say. There’s no family history of breast cancer whatsoever.”

Heather called her stepmother, who works at Munster Community Hospital, and made her aware of the concerns her doctor had just shared with her. She advised Heather, who was living in Kokomo at the time, to make an appointment at the Diagnostic Center in Kokomo.

That same day, the radiologist ran tests and determined that an MRI was in order. However, after speaking with a doctor from the Women’s Diagnostic Center in Munster, Heather was advised to get a biopsy. The biopsy came back, showing that Heather had two areas of concerns and a lumpectomy was necessary – the results came back as pre-cancerous benign.

Heather relaxed but kept an eye on her body. At that time, she was a varsity cheerleading coach and became an advocate for breast cancer awareness. She encouraged her girls to pay attention to their bodies, check themselves and to speak with a doctor if something did not seem right.

A year later, at 30 years old, Heather was checking her body like normal, but felt something.

“I didn’t know if it was scar tissue from the surgery, but decided to get it looked at,” Almager said. “After tests were run, it was determined that there were clusters all over my right breast. The doctors told me I would need a full mastectomy and four lymph nodes would need to be removed from my armpit, as there was concern it would spread.”

Within a week, Heather underwent surgery. She was informed that she had stage one breast cancer, but the doctors were able to perform a complete removal. The next step was considering a breast implant. Heather decided to proceed with that and had a breast expander put in.

A month into having the expander, while at home with her husband, Heather began to feel nauseous, had a growing fever and was getting cold chills. Instead of leaving it be, Heather trusted her intuition and went to the hospital. While there, she informed the doctors that she had undergone a mastectomy and currently had an expander in. Heather was given antibiotics and then transferred to Munster Community Hospital.

“My husband brought me up and about 30 minutes later I was given antibiotics,” Alager said. “At one point, my temperature reached 106 and I was told I had sepsis. I began to have seizures and this whole time the hospital staff was trying to drop my temperature. The last thing I remember was the nurse coming in, ran the thermometer across my head and called a code. The ICU team came in, said I had a seizure and then I woke up in ICU recovery.”

In the end, Heather’s expander needed to be removed completely because an infection formed around it.

All the while Heather was going through this battle, she remained positive. She began to share inspirational posts daily on Facebook. People began reaching out to her, letting her know how much of a positive impact her social posts were having on them. Heather has since continued with that tradition.

Even eight years into remission, Heather has continued being an advocate for breast cancer awareness. She has been an active participant in pageants, using that as a platform to educate others. She has even been a part of Susan G. Komen’s efforts.

Heather remains adamant that her husband was and has been her biggest supporter. Additionally, her parents, family, friends and coworkers have remained supportive, and are all who she credits for helping to keep her strong during her battle.

Heather has a piece of advice she would like to share with anyone who was just diagnosed with cancer.

“This isn’t the end of everything. There are people and organizations who will support you and help you get through it. Do not give up.”

This June, Heather will be on a national stage in Florida, competing as Ms. Indiana.

“I’m so excited and so happy to be able to share my story with others,” Almager said. “When people hear that I was 29 when I began my battle, they’re shocked. I always say that you’re never too young to be diagnosed. But that’s why I will continue using these platforms to spread awareness. I feel like this is what I’m supposed to be doing. I think it has also been a great coping mechanism for me – and if I’m able to help someone else, then it’s worth it.”