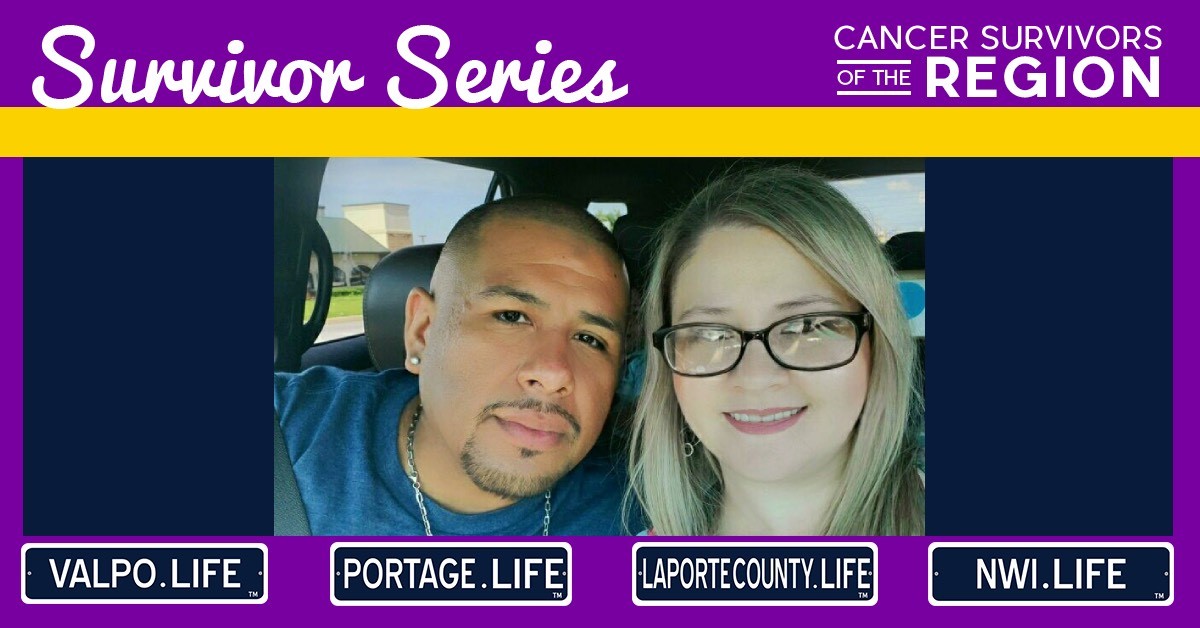 Originally from Steger, Ill., but now a resident of Dyer, Ind., Carrie Gallegos’ life took a complete turn back in 2009 that sparked what has now been her craziest but most beautiful life journey.

At the age of 24, Gallegos found herself driving from one doctor’s visit to the next after the discovery of a tumor weighing 15 pounds in her right ovary. As a young woman, this came as a huge shock not just to her and her family, but to her team of medical professionals as well.

It all started when Gallegos became ill and her boyfriend at the time encouraged her to go to the emergency room to get it checked out.

“After a week of being sick and not being able to keep anything down, I gave in and went to the ER,” Gallegos said. “The ER doctor insisted that I was pregnant and in labor. They did an ultrasound and saw that I, in fact, was not pregnant, and that I had a large mass growing.”

After hearing the news of a mass, Gallegos shared that her mind began to race with thoughts about the worst possible outcome. At the time, Gallegos had just watched the movie "My Sister’s Keeper" – a film about a young girl with cancer who experiences the harmful effects of chemotherapy and radiation – so the immediate switch in her mind of what her daily life could turn into was heavily weighing on her.

Blood work and tests were done on Gallegos to learn more about her specific case, which revealed that it was, as her apprehensions suggested, cancer.

“I was so tired from being sick that I fell asleep. I woke up to my parents and the doctor talking outside my room. I heard the doctor mention cancer and my parents talking in shock. I immediately started crying,” Gallegos said.

While the doctor was sharing the news, Gallegos learned that her CA 125 cancer markers, a measure of the amount of cancer antigens present, were elevated. Her medical team also discovered the reason for her sickness – an E. coli infection.

Though Gallegos felt awful at the time, with low energy from being sick and a newfound worry of what her new cancer diagnosis would bring, she looks back on this day with a sense of appreciation that this sickness led her to discovering a mass that she was completely unaware of.

“Although I had to get E. coli poisoning to find out about it, I am happy that I got sick, or the outcome could have been worse. The tumor had already been growing for five years,” said Gallegos.

Gallegos was referred to an oncologist, but it took multiple appointments to find an oncologist who was willing to take her unique case. With such a large tumor, doctors were nervous to perform surgery or start treatment.

Those cancer markers that were mentioned by the emergency room physician ended up being the highest that some of the oncologists had ever heard of.

“After seeing an oncologist, I learned that my cancer markers were almost 5,000; normal range is up to 300,” Gallegos said.

With her mind already full of worry, Gallegos was not necessarily comforted following these first few visits. As she headed into her appointment with Gynecologic Oncologist Dr. Sameer Sharma, though, things were different. Sharma turned out to be the perfect fit for Gallegos for more reasons than just one, and she feels immense appreciation for that.

“I was referred to a few doctors, but only one took my case – Dr. Sharma out of Franciscan Health in Dyer,” Gallegos said. “At the time, I had just left my husband and was without medical insurance, so I was concerned that I would not be able to get someone to take on my surgery and that it would slowly progress. I am truly grateful for all the work that Dr. Sharma and his team provided for me.”

Ultimately, Gallegos, her family, and her team agreed on surgery, and it was set for December 9, 2009, at John H. Stroger Hospital in Chicago, a learning hospital that would give students the opportunity to learn from her unique case.

With things looking up, Gallegos headed into her surgery with understandable nerves, but a lingering sense of hope for the future as well with her medical team and family on her side.

“I had never broken a bone, much less had a surgery, and this was a major surgery. I was so scared of the anesthesia,” Gallegos said. “I remember being wheeled into surgery and they started strapping me down on the table, and I kind of freaked out.”

After surgery was complete, Gallegos was given time to rest. Being at a teaching hospital, she had many people checking up on her during the five days she remained in the recovery area.

“I was happy everything was out, and I was glad to see my parents waiting for me and giving me a thumbs up, but at that point, I wasn’t quite sure what exactly had been taken out or what had been done,” Gallegos said.

She was given an update that they removed her entire right ovary, right fallopian tube, and various lymph nodes, and they even showed an image of the tumor, which had teeth and hair growing on it, to her parents. Since Gallegos was only 24 years old at the time and was interested in having children in the future, doctors did not want to remove everything in the area that surrounded the tumor.

“They took apart and rebuilt my left ovary, which is now half the size it should be,” said Gallegos. “Both sides were riddled with cysts, but they didn’t want to take everything out because I hadn’t had children yet.”

However, it wasn’t until another two months later that Gallegos finally learned of the severity of the cancer and the future of her diagnosis.

“Results were stage IIIC ovarian cancer, which means it was bilateral,” Gallegos said. “Miraculously, I did not have to get any radiation or chemo because they removed it all during surgery.”

Thankfully, the cancer was isolated and did not spread past her reproductive system. Though this was great news and Gallegos and her family were thrilled that everything was clear, she was simultaneously being told that she only had a two-to-three-year window to get pregnant. As someone who wants children, Gallegos was upset to hear that after this three-year mark, having a baby would be practically impossible.

While everything was happening with Gallegos’ cancer diagnosis and surgery, she later found out that her boyfriend at the time, who had not shown much support throughout the process, was cheating on her. With strength like none other, she moved on and later met her current partner, Mathis.

“We talked for about two months while I was recovering and then finally met in-person. We clicked instantly,” Gallegos said. “We have now been together for 11 years. Ironically, he worked at the doctor’s office that I went to on occasion.”

With children on her mind, Gallegos and her partner Mathis knew that time was short.

“We knew that I only had a two-to-three-year window to conceive, but the time came and passed with many false positives,” Gallegos said. “We were at a fair and saw a stand about fostering. I was drawn to the tent and got more information. We met with people from Family Compass and began our journey to become foster parents.”

This exciting new journey of fostering meant moving to a new house, taking classes to learn more, and going through the process with open arms, ready to welcome a new family member. But just as life had reminded her at the age of 24, things change, and her life took a surprising turn.

“About 90% of the way through everything, we had some mutual friends ask us if we would be interested in adopting their unborn child as they were not staying together and neither could afford or handle a baby at the time,” Gallegos said. “We of course jumped on it. We did all the legal paperwork, and I even got to be in the delivery room when he was born.”

Born at just 29 weeks, Gallegos’ baby was welcomed to the world followed by a 68-day stay in the NICU. After some much-needed love and care, Gallegos brought her baby boy home.

About a year and a half later, Gallegos and her partner decided to start foster parent classes again and reached back out to Family Compass. Before classes began, Gallegos was once again reminded that plans change when you least expect it.

“We were pregnant! Eight years after being told I only had a two-to-three-year window, we were pregnant!” Gallegos said. “Dr. Sharma and my OBGYN, Dr. Howard Marcus, were shocked. Everything was amazing, until my genetics testing came back, and we tested positive for Down syndrome.”

Though Gallegos shared that she did not have any care in the world whether her baby would have Down syndrome, this new finding meant additional worries of seeing a high-risk doctor and monthly scans to check bone development.

“Every appointment was a true blessing; my baby was healthy and showed no signs of Down syndrome,” Gallegos said. “I went into labor on June 16, 2018, and had my miracle baby on June 17, 2018, my Father’s Day baby!”

Gallegos proudly shared that she is 12 years cancer free with two miracle babies at her side. Her adopted son is now five years old, and her birthed son is three years old.

“I am extremely grateful to have overcome such a tragedy that a lot of people do not survive,” Gallegos said. “But my feelings of fear and uncertainty have not changed much; I am still pretty affected by it in my everyday life.”

Amidst all the surprises and turning points, Gallegos feels that her parents have truly been the support to her backbone.

“I could not have made it through this – physically or emotionally – without my parents,” Gallegos said. “My mom and dad have been my rocks through all of this. From my mom bathing me because I was too ill after my initial E. coli poisoning, to my dad taking many days off work to take me back and forth to my doctor’s appointments, I am so grateful.”