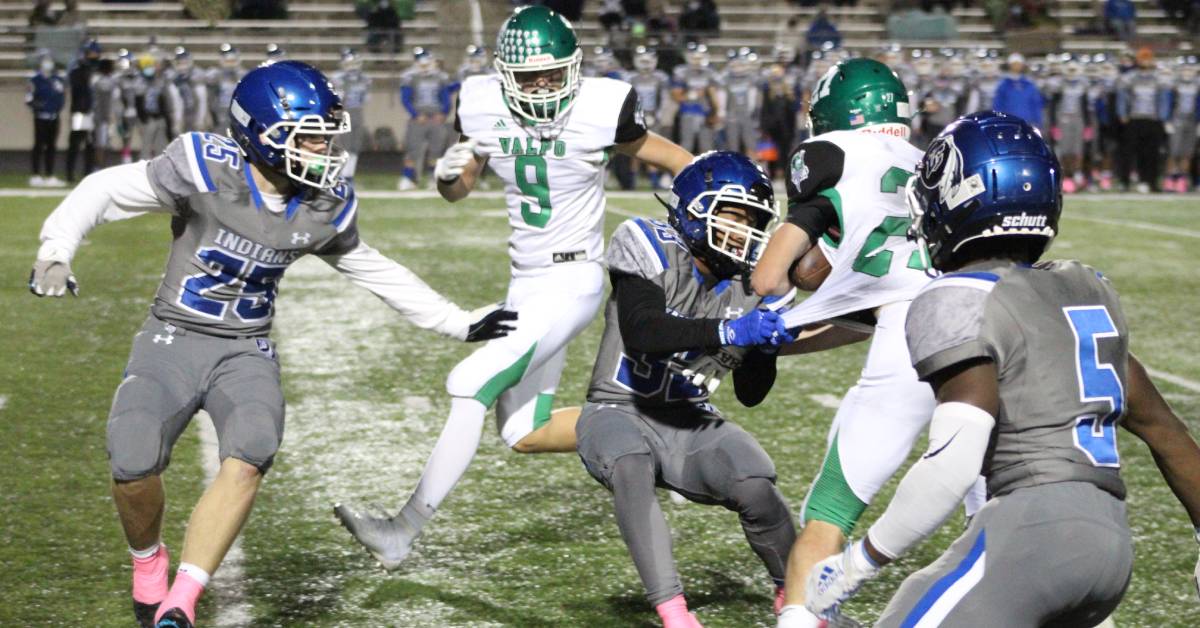 Everybody in the Region involved with high school athletics, from the players all the way up the administrators, knew that this season of football would be different. In the midst of the COVID-19 pandemic teams had to find ways to keep their players safe, faced last minute game cancellations, and even sat furloughed for weeks while players quarantined.

The regular season came to a close on Friday, and two teams – each with very unique experiences with COVID-19 challenges – faced off at Lake Central High School. The home team, the Lake Central High School Indians, were a rarity in the Region, carrying a 1-7 record while managing to complete a full schedule of games. The visiting Valparaiso High School Vikings on the other hand, played just four games after opponents canceled due to positive tests – before they themselves had to wait on the sidelines after positive tests among their own squad.

“I think the big thing for us was knowing that it wasn’t if, it was when,” said Bill Marshall, Head Coach of the Vikings. “We just hoped that it wouldn’t happen sometime near the postseason.”

But the team battled back, taking a dominant 41-7 win against Portage High School in their return to the field last week, and tallied another win tonight with a 44-17 victory over Lake Central High School.

“Our kids are just a resilient crew,” Marshall said. “They’ve shown it week in and week out. For me, my heart hurts because they’ve had to miss four games. At the same time, we’re feeling blessed to have made it to another Friday. This is actually our first consecutive Friday that we’ve had throughout the season.”

Grant Comstock, a senior wide receiver for the Vikings, said the biggest struggle was finding a rhythm.

“It’s been more of a struggle because we haven’t had a consistent schedule week by week, it’s been different everytime,” he said. “We’ve had to adapt, and I think we’ve done well at that. When we came back [from our positive test] we knew that we were going to do everything we could to stay on the field, so that nothing could be taken away from us.”

The visiting Vikings might have dealt with as many challenges as you could imagine in a season of pandemic football, but things were definitely not simple for the home team despite not missing any games. Tony Bartolomeo, Head Coach for Lake Central High School, knew their season could grind to a halt at any time thanks to COVID-19.

“That’s a thought every day,” he said. “We’ve got kids that can’t play tonight because they were sitting by somebody in class. They didn’t do anything wrong, but if someone in their class tests positive and they’re around you on the seating chart you’re out of the game.”

Managing those instances, and all of the other procedural tasks that come with coaching the biggest school in the Region during a global pandemic was a daily challenge, but one Bartolomeo was happy to face.

“This is a job, but it’s one well worth doing,” said Bartolomeo. “There’s masks, procedures, social distancing, not using the locker room, contract tracing, bus charts, just lots of stuff to do. But, any time we can get the kids out here to play, it’s all well worth it.”

Though the regular season is over, neither team can let down their guard as they prepare for sectional play.

“We’re getting better each and every week, I’d say right now we’re in midseason form,” Marshall said. “Now, we’re even looking at getting into end-of-season form, and I hope that’s scary to others!”