GreatNews.Life dominates sports in the Region 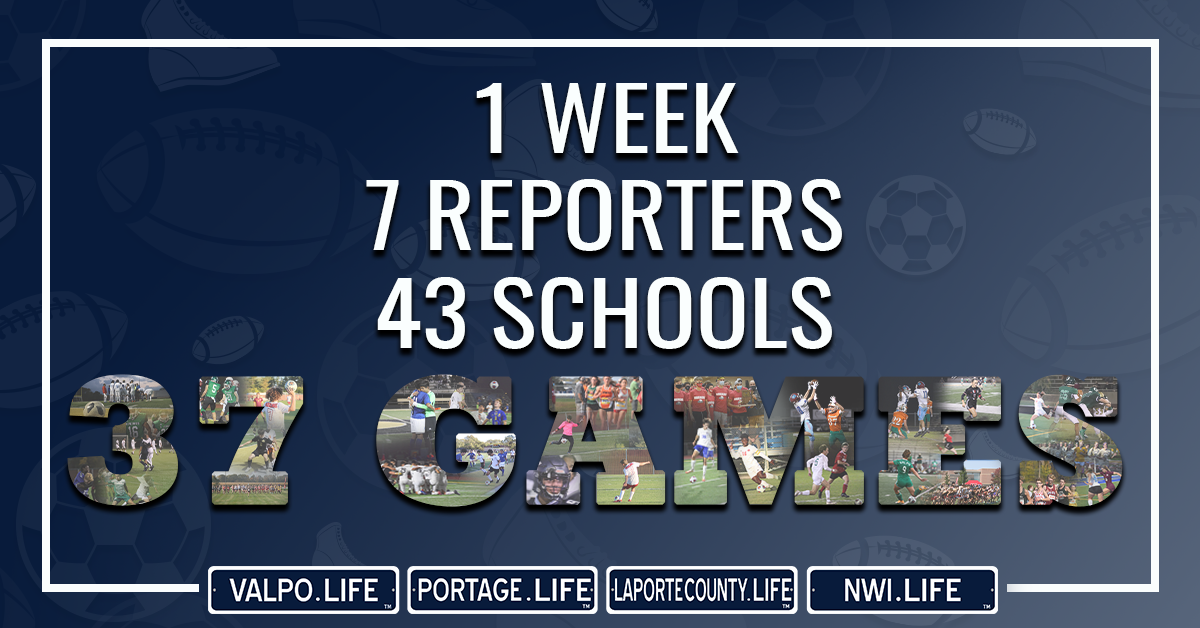 This historical week could not have been done without a team full of dedicated individuals who spent night and day shouting out high school sports all across the Region. You won’t want to miss our staff's favorite teams, moments, and photos of the week.

What team was the best to follow on social this week?

Kelsea Costello: For me, this would probably be Crown Point. As a Crown Point High School graduate, it’s always fun seeing my school succeed in anything whether that be sports, the arts, or work in the community.

Peyton Mahlmann: I would say my favorite team to follow this past week was Portage. This week was an exciting one, but whether it’s the first week of the season or the last, the amount of support that we see the Portage community give to the athletes is incredible. Whenever we share a photo of Portage athletes from the Girl's and Boy's soccer teams competing in sectional games this week to the runners competing at the cross country sectionals on Saturday, their fans never fail to fill the comments and share their encouragement with “Go Portage!” or “#PortageProud.” I really enjoy posting about Portage sports because I always know how much support will be coming from their friends, families, and community.

Allison Tunstall: Andrean was so much fun to follow and share their big wins. You can tell their teams had so much positive energy on the field, and you can see that excitement shared in every social media post and in every comment congratulating the Andrean teams on their successes.

Kayla Hofferth: This week, a great team to follow was Chesterton. Chesterton players and fans are always so into the games, and I love seeing pictures come in from reporters of happy, excited faces. And if you haven’t seen the Chesterton sectional championship photos, you are truly missing out on some excited players! I can only imagine how that energy felt being on the field with those players.

What did you learn about yourself and the NWI region while being immersed in all this coverage?

Curtis Hankins: It's often hard to see the impact our photos have on our audience, so it can start to feel a bit routine. This week, I had a parent come up to me and tell me how much it meant to him to see the photo I took of his son pointing to his mom in the crowd after scoring a big goal. I hadn't thought that much of the photo when I uploaded it. It wasn't the best lit picture I'd taken that evening - but that parent was simply thrilled that I'd captured his son's moment of triumph. It was a big reminder of why we're out there.

Gena Demuth: The NWI Region was very welcoming. I heard "thank you for being here!"  and "thank you for taking pictures!" at every event. Overall, everyone at the events was happy to just have the opportunity to play or be there to watch the sport. I don't remember this level of appreciation, this many smiles, or this much happiness last year.

As far as myself, I didn't necessarily learn one thing. I do know when I was tired and having to problem solve more than once, I didn't give up because I knew the whole GreatNews.Life staff was in it together. We were a team of our own with spectators as well.

Kellyn Vale:  I was thanked by so many coaches and athletic directors last week. Just hearing how appreciative they were of what we do was so heartwarming and motivating.

I think what really stood out to me this week was how much I’ve grown as a coverage team member over the past two years! I can do things now that I never could have imagined when I walked in the door at GreatNews.Life!

Aubrey Thomson: While I was out covering soccer sectionals throughout the Region, it struck me that while there are so many different teams and people, they each have their own story. Each story is unique and special which may seem impossible - surely some stories are not original - but each one is a different narrative that invokes emotion. It is a joy to capture those moments of both grit and unexpected elegance as the athletes compete for a team they love in a sport they love. I enjoy finding positive moments amongst teammates whether that means jumping into a teammate's arms after scoring a goal, reassuring a teammate whose attempt fell short, or laughing with a teammate during pre-game stretches.

Colin Lenburg:  I learned more about my own personal drive and determination as a photographer during the last week of coverage. I was literally hired the week before, and my editors and managers believed in my abilities enough to send me out on my own without hesitation. I was able to jump into the deep end of the pool and resurface a more talented photographer. The Region is a tremendously unique area. I was given the opportunity to document a small fraction of NWI's future, and I'm more than thankful for the chance to document the sports of the Region during the craziest year in recent memory.

Kami Tupiac: All the schools have been extremely helpful with making sure our reporters are in the right place and right time. We are so appreciative of the flow of communication with the schools because they have been letting us know when there have been last-minute changes to games. Having this line of communication has really made our reporters feel wanted and appreciated when they go to the games and that feeling is unmatched. My favorite part of this sports season has been when the games were over and the schools would tell us how much they loved the reporter on-site and can’t wait to have them there again!

What was your favorite moment that you were a part of?

Dan Petreikis: My favorite moment was seeing the relentless joy on the faces of the team from Clark as they clinched the sectional championship and claimed their trophy and immediately started running to share the moment with their fans who supported them on their journey.

That moment, capturing the elation at securing their schools first and only sectional championship was everything. It was full of emotion on the heels of a tumultuous season with the school board canceling sports for the season in August and then reversing their decision in September. That only left the team enough time to throw together an abbreviated, two-game regular season...barely enough time to prepare for the playoffs. Yet here they were, facing off against very tough competition from Griffith.

The School City of Hammond announced recently that they will be closing Clark for good at the end of this school year, creating bittersweet memories for this soccer team, their fellow students, and their families that support them in their endeavors. But that moment, with the team united in joy at accomplishing something remarkable, was a memory that they will likely carry with them for a lifetime.

It was this moment that taught me something about myself and the importance of sports in the Region. I've often been surprised at the passion surrounding varsity games here in Northwest Indiana. The passion and commitment I've witnessed, whether running along the sidelines at a football game or sitting at the end of the court in one of the region's basketball match-ups or anywhere in between, the passion and excitement remain strong. These games are more than the sum of their parts, with each game being so much more than just two groups of kids chasing a ball. These games have meaning and purpose, and I'm very glad that we have been able to salvage some of that, even in the face of one of the most difficult years in recent memory

If you missed any of the games we covered, you can find our galleries here https://photos.ideasinmotionmedia.com/.

Be on the lookout for more games.  Who will we cover next?