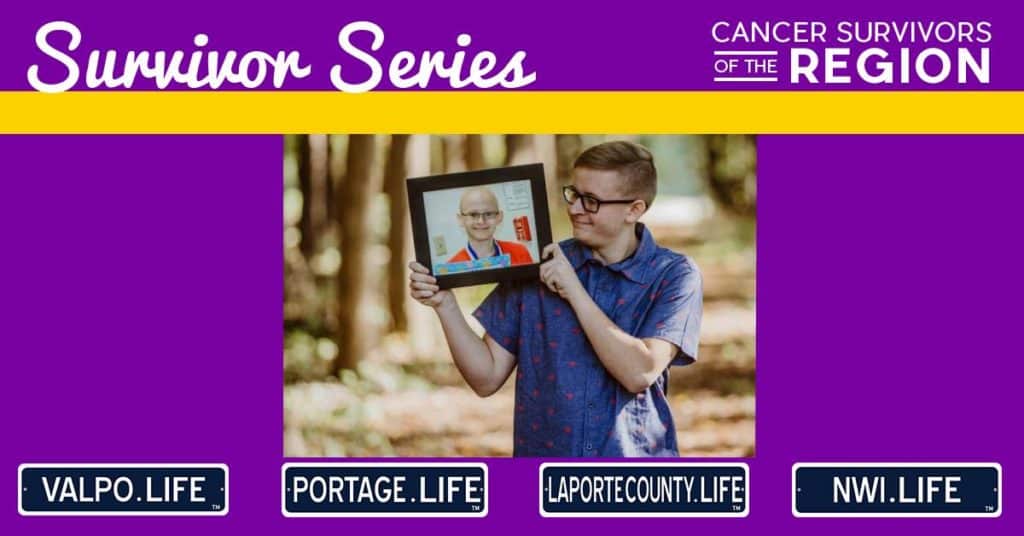 Prestin Butcher’s battle with cancer was sudden and dramatic. Just a fifth grade kid, he started getting severe headaches disrupted his ability to take part in swim practice. His mother took him to the doctor where they did a CT scan that showed a terrifying result.

“First they did an MRI and didn’t really find anything, but they decided to do a CT scan just to be safe,” Butcher said. “Then they found a tumor on the back of my brain, about the size of a ping-pong ball.”

He does not remember much after that, and he was undergoing surgery within hours. They had diagnosed him with medulloblastoma, the most common form of primary brain cancer in children.

“I came out of the scan and saw my mom crying and was just really confused,” he said. “Next thing I knew, they stuck an IV in me and put me in an ambulance to go to a children’s hospital in Indianapolis. I was more confused than anything, I didn’t really have time to process what was going on.”

The surgery went well, but that only marked the start of the battle. He still had dozens of rounds of radiation and many cycles of chemotherapy to endure.

Video Credit: The video above was made by Mr. Varda's Radio/Television Class at La Porte High School. This video was produced by Preston Butcher and Alaura Shuble and is an award-winning video with the Indiana Association of Student Broadcasters (IASB).

“For the first couple of days, I couldn’t even speak since they’d been working on my brain,” he said. “I had to stay in the hospital for a couple of months after that, I had to work to get back my ability to move around and talk again.”

He did get to return home, but the regular trips to the hospital for his radiation and chemotherapy sessions and his weakened body left him unable to live like a normal kid for some time.

“After that, I couldn’t even go outside. They told me plants and stuff just had too much bacteria,” Butcher said. “It took almost a whole year for me to recover. A year of nothing but lying in bed taking medicine.”

The isolation took a toll, and was the hardest part of the entire experience for a boy.

“I could barely even walk around my own house,” he said. “Doing nothing but staying in bed watching TV sounds nice at first, but it gets so boring and tiresome after a while.”

Butcher credits his family with keeping him sane and on the road to recovery.

“They stuck by me for every minute of it,” he said. “They were definitely big supporters, and never left my side. They’d stay overnight in those uncomfortable hospital chairs. They were there the whole time.”

When things finally started getting back to normal, one of Butcher’s main goals was getting back into swimming.

“The doctors told me that it would take me a while to get back in the rhythm of swimming,” he said. “But, I was able to come back and start swimming again with no problems. It was a really big motivation for me. They’d also told me I wouldn’t be able to ride a bike because my balance was so bad, but I did that too.”

Eight years later, Butcher is now a La Porte High School graduate and spent all four years on the swim team. He is attending Purdue University Northwest and is working toward a career as a teacher.

“When I was going through my battle everyone would always say that I should become a doctor, but that just wasn’t for me,” he said. “I went through cancer in the fifth grade, and that was a lot not only physically, but emotionally. So, I feel like I can be a lot more understanding of kids and what struggles they might be going through.”

For anyone going through that fight with cancer, or those who know someone who is, Butcher likes to offer a message of hope. “It’s not going to be easy,” he said. “At the end, it’ll be totally worth it. You’re going to be so glad you went through all that hell, there’s light at the end of the tunnel. It makes you stronger. I almost didn’t make it, so I feel like I appreciate things a lot more now that I’ve gone through that.”