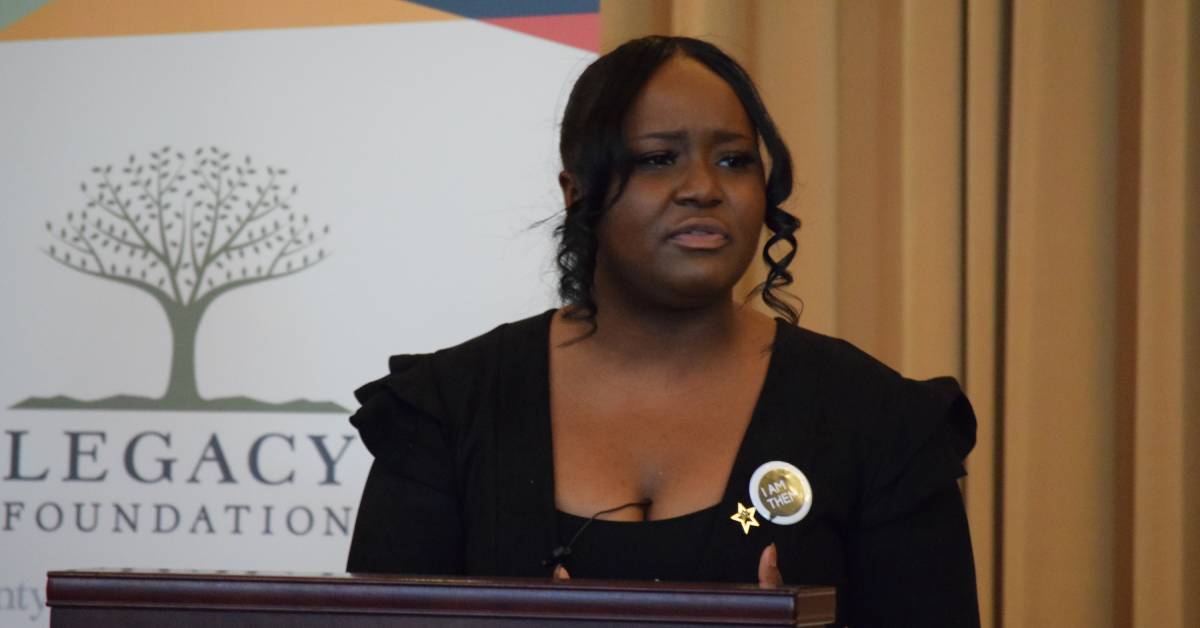 Courage is defined as having the ability to do something that frightens you or shows strength in the face of pain or grief. In 2016, Legacy Foundation formed Women in Philanthropy, a non-profit for women, by women, to encourage women. At their 4th Annual Women in Philanthropy Lunch, 19-year-old philanthropist Aaliyah Stewart proved to be the epitome of courage, modesty, and thankfulness during her speech to a crowd of nearly 60 women of all ages.

“When I started my non-profit I knew that I wanted to give away scholarships in the name of my brothers because both of them had dreamed of going to college. Each year, I went out and raised money—I even gave up my Christmas to make sure that other young people could see the good in Gary and see the better of this world,” Stewart said.

Now, her foundation and its subsequent movement, #IAMTHEM, gives youth in Gary hope and meaning on the path of finding a better life. Through all of this, she gives God the glory for everything that has happened.

“The plan God had for me was more than I could have ever imagined –being able to help young people and let them know that entrepreneurship can happen at any age, you can make it at any age,” she said. “Just because you lose someone doesn’t mean something bigger isn’t at the end of the tunnel.”

A few years ago, Legacy Foundation decided that they wanted to reach out to women in Lake County in the hopes to find a way to bring them together and focus their philanthropy in a way that would impact girls, women, and families in the area. According to Carolyn Saxton, President of Legacy Foundation, Women in Philanthropy has raised and given more than $40,000 dollars in grants and nearly $30,000 for the endowment fund.

“The goal is twofold—one, to raise money so we can give through our grant making today, and two, to save a portion of that into an endowment that will serve future projects that will support young girls,” Saxton said. “It’s interesting and exciting to see this continue to grow and see women come together in this capacity to learn more about their philanthropy.”

Mary Jane Eisenhauer, a guest at the lunch and Associate Director for the School of Education and Counselling at Purdue Northwest, was invited by her co-worker, Verlie Suggs, to support the foundation.

“The work that’s being done in our communities is impactful work, and I think it’s important that we pause for a moment to celebrate that and determine how else we can support one another further,” Eisenhauer said. “Women often have a pulse on what’s happening, they can really determine where the needs might be because they see it firsthand and they can really understand the intricacies and complexities of what’s going on.”

Owner of True Wealth Advising and Board Member for Legacy Foundation, Carey Yukich, has been a part of Women in Philanthropy for nearly three years and knew almost everyone in the room. Bringing women together and being able to impact the community in such a big way is just a sliver of the reasons she’s so involved.

“Getting to know people from all different walks and professions centered around the same common value and then getting to see the impact of what we can do in the community is the best part,” Yukich said.