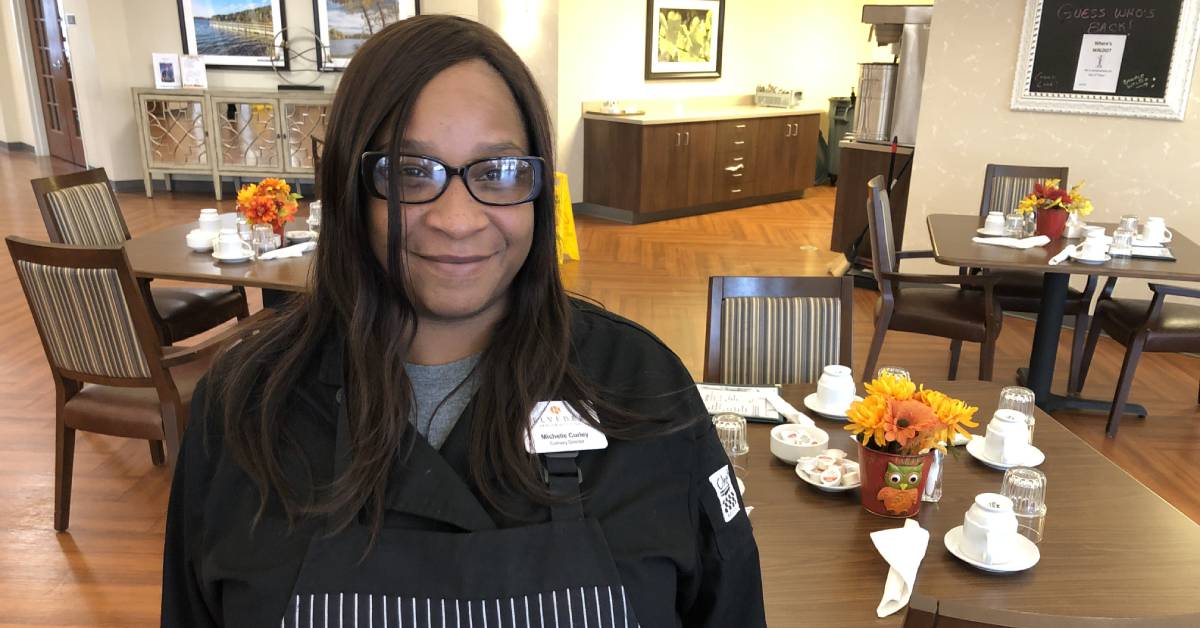 If there’s one thing Michelle Curley has learned that humans shouldn’t take for granted it’s the importance of a good meal. As culinary manager at Belvedere Senior Housing, it’s Curley’s responsibility to ensure her residents are both well-fed and happy.

“My goal is to serve the residents meals that fit their health needs as well as their palates,” she said. “Their meals should be nutritious but still tasty.”

One of the ways Curley elevates her daily meal plans from the corporate-generated guidelines she is given to work with is by listening to her residents.

“I’m allowed to make modifications as I see fit, and I usually make those based on what the residents tell me,” Curley said. “Everything they’ve ever requested or suggested, I’ve found a way to fit it on the menu so far. I want to show them that I’m listening and that I care.”

Curley has been serving senior communities since she was 22, and she’s learned a thing or two about working with the population. One of them is the value she found in listening to residents, and another is in relationship building. Prior to her first job as a server in an independent living facility on the North side of Chicago, Curley worked in the fast food industry. She quickly discovered that she preferred the people-focused aspect of working with seniors.

“When you’re working in fast food, customers order, pay, take their food, and leave,” she said. “Here, I get to see my residents every day, I get to build relationships with them. It’s much more personal, and I feel like my sense of purpose is a lot clearer.”

Before joining the Belvedere team, Curley had been working as a CNA at a facility in Ohio. A back injury required her to move back and be near her family in Northwest Indiana for surgery, and she decided to reinvestigate her interest in serving seniors through the food industry.

During recovery, she studied and went on to receive her associate’s degree from Le Cordon Bleu College of Culinary Arts. She fell into her role at Belvedere Senior Housing in July.

“Out of everywhere I’ve worked, this is the nicest group of residents,” Curley said of the Belvedere crew. “They’re all very sweet.”

After only a handful of months, Curley feels solidified within the Belvedere team and looks forward to building those relationships every day.

“I love feeding the residents. For them, meals are often the most important part of their day. Plenty of them will attend activities and exercises for an hour here and there, but most of them depend on coming down to the dining room for a good meal,” she said.

The significance of a good meal extends to Curley’s own life, too. Along with the therapeutic benefits of listening to music and crocheting (a hobby she picked up during recovering from her back surgery), she loves to cook for herself.

“I love cooking, even if it’s just for myself,” she said. “For me, it’s something I love to do and a part of caring for myself.”

Learn more about the ways life is lived better at Belvedere Senior Housing.