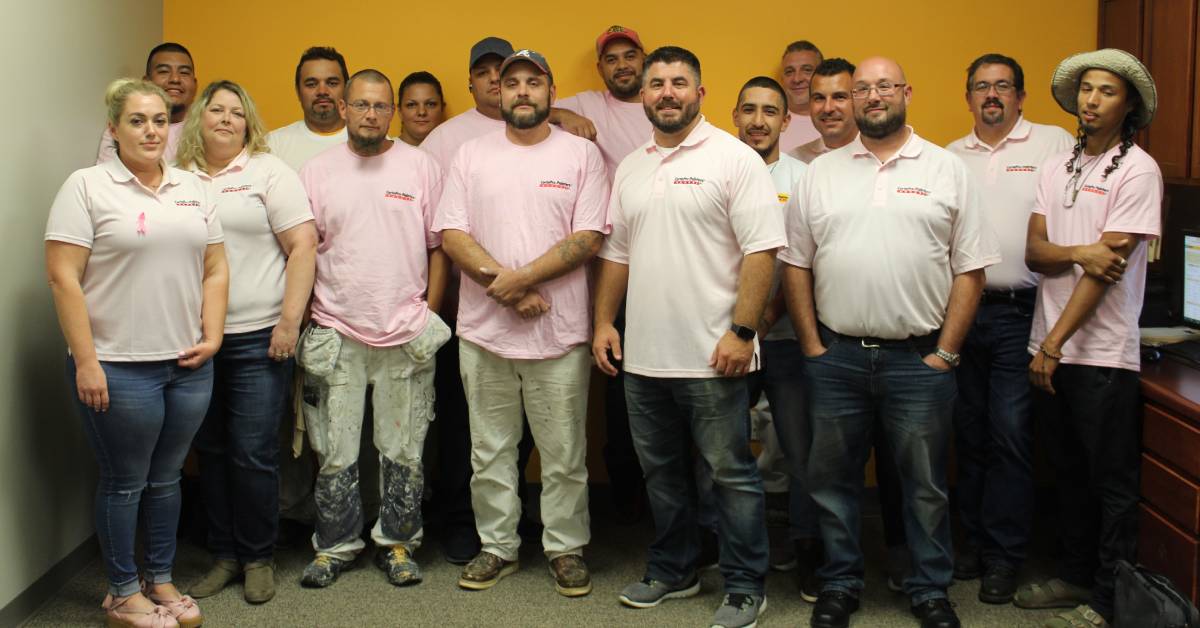 “I think it’s important to give back, and we were all so excited to get involved,” said Jackie Coover, Commercial Marketing Associate at CertaPro Painters of Northwest Indiana. “It definitely exceeded what I thought we’d accomplish.”

CertaPro branches across the country took part in Paint it Pink, but CertaPro Painters of Northwest Indiana wanted to go further and add a personal, local touch to the initiative. They reached out to Franciscan Health about painting a treatment or meeting room free-of-charge. Franciscan instead directed them to Burdette Emery, a Michigan City patient battling a rare form of breast cancer.

“When I met her, it was just such a wonderful experience,” Coover said. “She’s been dealt a really difficult hand. She takes care of her granddaughters and is still working full-time during treatment, but she’s so positive. She’s always looking to help others, even with everything she’s been through.”

Emery was floored when she was first approached about having one of her rooms painted.

“I just thought, ‘wow, me?’, I was happy but so surprised,” Emery said. “I thought it was really nice of them to consider me. There are so many breast cancer survivors, so I don’t know what made Franciscan choose me, but I’m grateful they did.”

For Coover, it became obvious why Emery was chosen the moment they came to her door.

“She just welcomed me into her home and had me sit down at her kitchen counter,” Coover recalled. “She asked me if she could get me something to eat or drink. She said she was worried about me driving home at night in the dark. She’s just so giving and caring, even when she’s going through so much.”

Emery decided to have CertaPro Painters of Northwest Indiana paint her granddaughter’s room. CertaPro team members from painters who donated their time all the way to the top of management came by to help and see the room once completed. They even brought along a matching bedspread and drapes.

“I’m so proud of our team taking this to a whole new level by helping out someone locally,” said John Jordan, Owner and President at CertaPro Painters of Northwest Indiana. “They came up with this idea on their own. I couldn’t be more proud that they accomplished this with their own initiative.”

When the room was finished and furnished, Emery and her granddaughter were ecstatic.

“It turned out really nice,” Emery said. “My 4-year-old granddaughter just said ‘Grandma I love it’, and seeing her expression light up made me feel even better.”