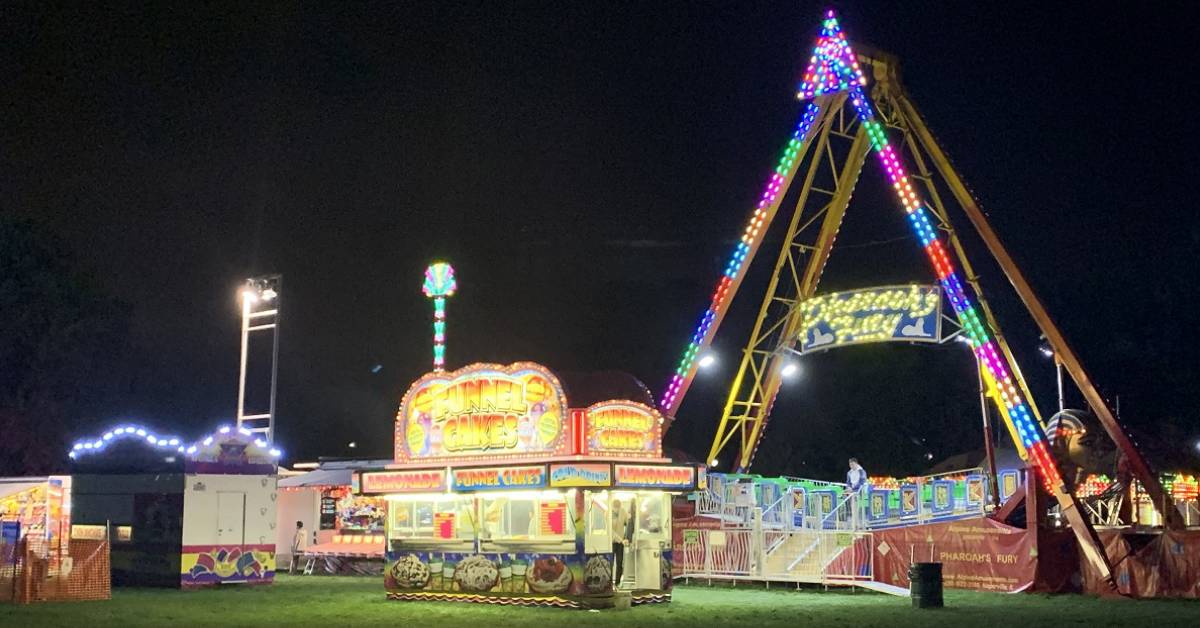 With plenty of activities to partake in, the fall season has been going strong in Highland.

First, Highland’s Fall Festival took place at Main Square. The event was scheduled from Friday, September 27 through Sunday, September 29, but inclement weather on Friday prevented the fair from opening. The festival was still held on Saturday and Sunday, and Highland residents were able to enjoy the fair. Rides, food, and entertainment were all featured at the festival.

At the high school, a student-directed play took center stage called “Out of Sight…Out of Murder.” Eddie Jania directed, and Jack Banasiak assistant directed. Both are currently juniors at Highland, and they worked hard to put the play together.

The play had two different performances, with the first on Friday, October 4, at 7:00 p.m., and the second on Saturday, October 5, at 7:00 p.m. The set of the play was built to look like a living room in an old manor.

Now that the fall play is over, work for the next Highland Theatre Company production—a musical—is underway.

The dates and times are as follows:

These concerts will show off the students’ talents at both the middle and high school levels. The concerts for all three will take place at Highland High School in the auditorium.

Highland High School chemistry teacher Margaret Jensen enjoys being able to teach young minds, as science and technology is an important part of our society.

Jensen’s childhood led to chemistry, and it ended up being a perfect fit for her.

“I got into chemistry because as a kid, I was always curious. I always tried to mix things together and figure out how things worked,” Jensen said. “Chemistry is a great mystery where you find out what everything is made of. It has always intrigued me.”

Jensen, a Purdue alumnus, has been teaching for many years at Highland and enjoys her job and the people with whom she gets to spend her day.

“I genuinely enjoy being around teenagers. I think they are generally just good people,” she said.

Jensen said that she enjoys being able to see students understand what they are learning.

“I love when the kids ask me really awesome questions, maybe even a question I’ve never asked myself,” she said.

As an educator, Jensen also knows that she has an important role in the lives of her students.

“I know what I say to students has an impact on them, so I try to be positive.”

For anyone that wants to be an educator or a chemist, Jensen has advice.

Jack Banasiak, junior, was proud to co-direct the Highland Theatre Company production, “Out of Sight…Out of Murder.” Banasiak and fellow student director Eddie Jania were very proud of the production’s outcome.

“The play turned out amazing,” Banasiak said. “I’m so proud of our cast and so thankful to the crew who helped us.”

Banasiak explained how it felt to play such an integral part in a theatrical production.

“It was awesome watching everything come together so beautifully,” he said.

The play also gave Banasiak lots of directing experience that he can use in the future.

“I learned a whole lot from directing. I didn’t know how much time directors put into shows,” he said. “My favorite part of directing was definitely toward the end where it stopped being about big things, and we got to add tweaks here and there to really make the show our own.”

Banasiak was also proud of the student cast.

“A lot of our cast had never done a show for HTC before, and it was really great getting to bring them into it and show how good they were.”

Overall, Banasiak learned a lot from the experience and felt that all of the time he and Jania put into directing the play was well worth it. “It’s great seeing something you work so hard on come out exactly how you want it,” he said. “It’s not perfect, but we had our own personal touches which are what I think made it as good as it was.”