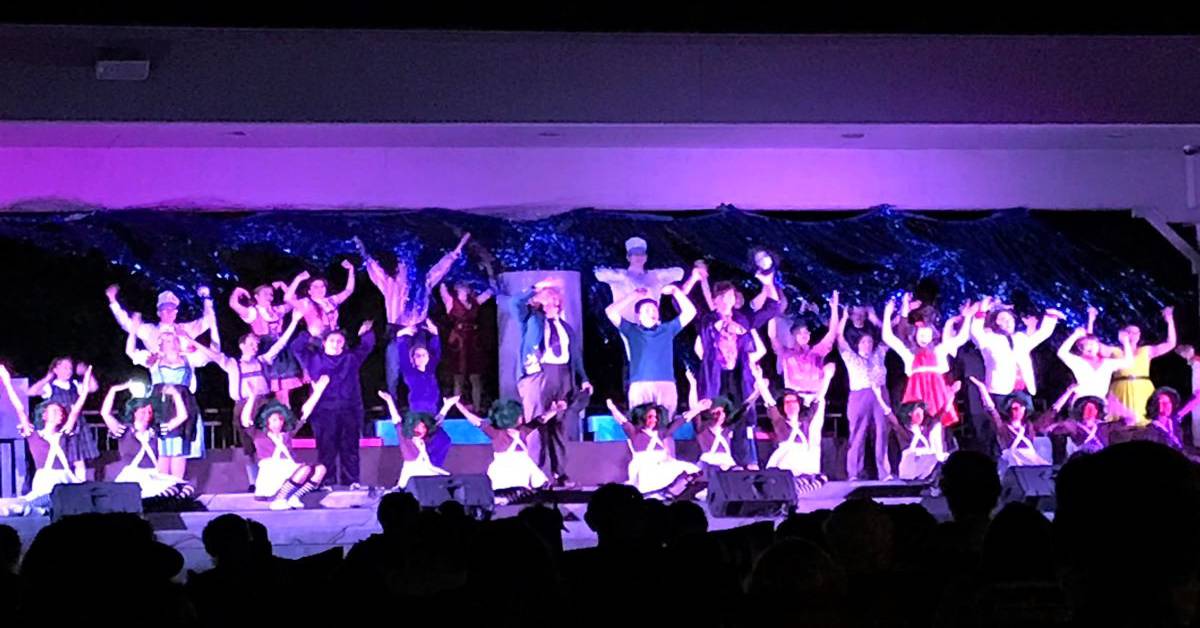 Highland Performing Arts Group put on a production of Willy Wonka, the beloved musical adaptation of the 1971 film and Roald Dahl’s book, at the Highland Main Square Park Gazebo on July 25 - 27, and August 1-3.

Willy Wonka tells the tale of Charlie Bucket, a poor boy who finds a golden ticket that grants him the opportunity to tour famed candymaker Willy Wonka’s factory.

The cast and crew were comprised of actors from all over Northwest Indiana, including Griffith’s Daniel Sheffield, Abby Morrison, and Abby Wroblewski. Sheffield portrayed Grandpa Joe, Charlie’s grandfather, who accompanies him on the tour, while Morrison played Phineous Trout, the reporter who must interview the five winners of a golden ticket and finds all but Charlie to be spoiled brats. Wroblewski was on backstage crew.

The musical was watched by multitudes of townsfolk and parents who brought picnic blankets, lawn chairs, and a great deal of nostalgia for the cherished story.

Rehearsals occurred a few times a week until the final two weeks, when dress rehearsals began. The cast and crew spent approximately four hours a day at Highland Main Square. They also rehearsed at the nearby Lincoln Center.

“Even when it was ninety degrees [outside] and the air conditioning wasn’t working, we would still rehearse,” Sheffield said.

According to Morrison, acting on an outdoor stage made the process unpredictable. Windy days tampered with the microphones, and the pavilion stage didn’t allow for a giant set. The crew used clever visual tricks, props, and the talent of the lights and sound crew to conjure a chocolate factory, school, and family home out of a minimalist set.

“The Highland Parks and Recreation Department funds the show,” said Griffith junior Abby Morrison. “They let us use the stage and previous costumes from other years. People come to join the Highland Community theatre from all over [Northwest] Indiana.”

“These community theatre productions give teens a chance to come together and feel like they’re part of something bigger,” Morrison continued. “What was special for me was getting to know people also involved in theatre around the area. Even if we were strangers at the beginning, we were a family by the end. I’ve made friendships that have lasted years from community productions.”

The shows were a great success. According to Sheffield, every show drew a steady crowd and even attracted people from out of state. Highland has held musicals in the park for decades. They are a staple of community life and for Highland summers, providing students with a chance to expand their theatrical careers outside of school.

“These outdoor shows, which have been a tradition for decades, really unite the community in a way I can’t even describe,” Sheffield said. “Willy Wonka is a special show because of how timeless it. I’m sure it has a place in many hearts of children and adults alike, and its lessons can be told again and again. I feel like I couldn’t have gotten a better role personally. It was an amazing experience.”

All three Griffith students are active in Griffith High School’s drama department and will be appearing in the fall production of I Remember Mama. Highland Performing Arts Group will have a new musical in the park next summer. Until then, we are off to the school year!