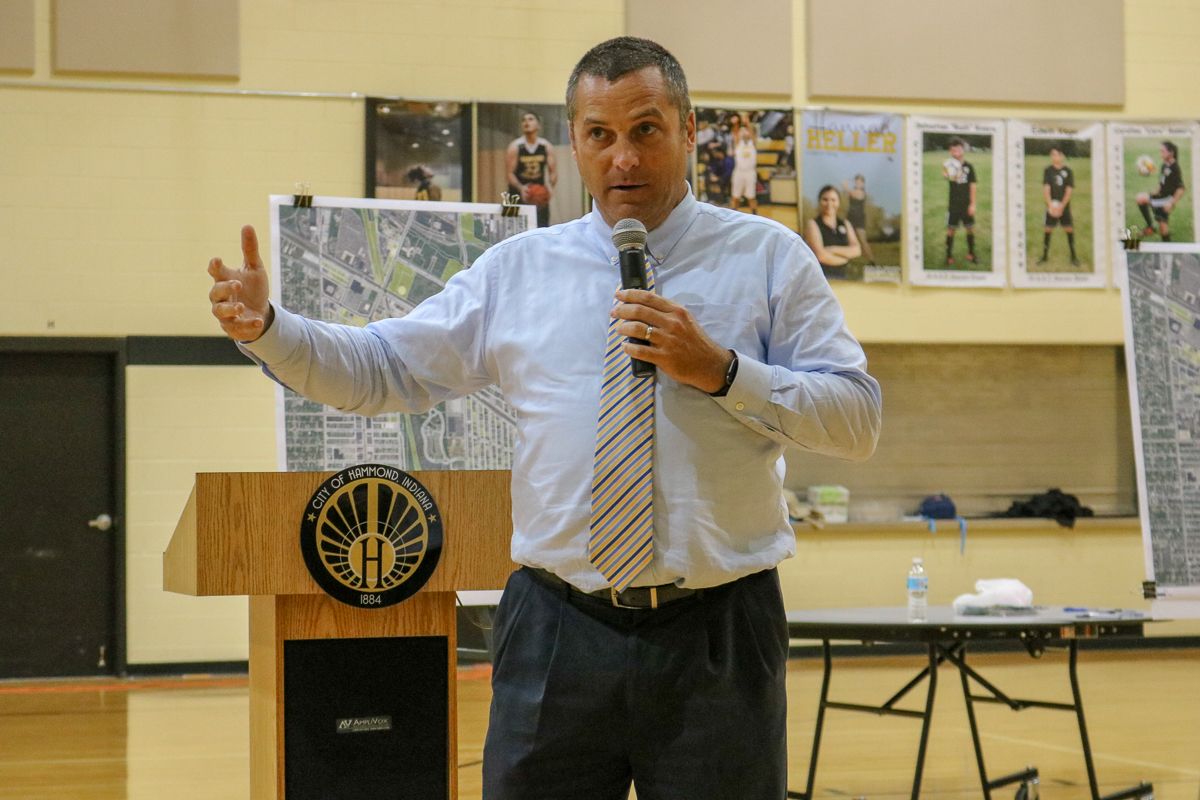 Jeff Speck, the nationally acclaimed urban designer and author of the 2012 book “Walkable City: How Downtown Can Save America One Step at a Time,” sees lot of potential in downtown Hammond.

In the Hammond Academy of Science and Technology gymnasium Tuesday night, Speck outlined a series of improvements he and his team from Stantec, an engineering design firm, are building into their plan to transform the city’s core.

McDermott Jr. began the evening by updating attendees on the city’s involvement in the West and South Shore train line expansion projects currently awaiting approval from the U.S. Congress.

“We will combine both lines into one station in Hammond, called ‘The Gateway,’” he said. “Which is a big win for Hammond.”

Since the original usage study and proposal, there has arisen demand for a downtown Hammond station between the new Hammond Gateway and South Hammond stations. Instead of upending the approval process by adding the station to the larger project, McDermott said, the city is willing to take on the cost directly.

Following the mayor’s remarks, Speck introduced Dixon by explaining how their two areas of expertise, the former in buildings and places and the latter in people and programming, work in tandem to prepare cities for new transit development.

Dixon described the changing demographics that make up modern urban areas. Current trends show that people with education and higher incomes are moving back into city centers, preferring access to transportation, density, and diversity over large, detached single-family suburban homes.

In that sense, he said Hammond’s room for development is perfectly positioned to take advantage of shifting interest in urban lofts, condominiums, and narrow lot single-family houses.

“This is an opportunity we have not had in my lifetime,” Dixon said. “But it is here today. We are not a peak city, we are a cusp city.”

Dixon praised McDermott for his forward thinking and commitment to improvements.

“You have a visionary mayor,” Dixon said. “You clearly have a mayor and city leadership that wants to take Hammond into this new era and get it right.”

In order to encourage greater density, urban areas must be walkable as well as liveable, continued Speck in the second half of the program.

“In most of the places I work I say ‘don’t rebuild, restripe,’” Speck said. “For the price of rebuilding one street, you can restripe many streets.”

After the presentations, members of the public were invited to approach members of Speck’s team at several stations next to blown-up maps of downtown Hammond and provide feedback about their city and future plans. Attendees were given green dot stickers to apply on existing features they liked, and yellow dots to identify problem areas. There were also larger sticky notes and pens available to provide more detailed comments.