Beer lovers rejoice! No longer will Hoosiers have to cross into other states for the delicious taste of America’s Oldest Brewery because D.G Yuengling & Son Inc. is expanding to Indiana with the help of Indiana Beverage.

After many years of discussion, the Yuengling family will now be distributed to three wholesalers in Indiana. Indiana will be the 20th state to have the rights to sell Yuengling’s Traditional Lager, the Light Lager, their Black & Tan brands, and as the year goes on, Yuengling’s seasonal and heritage line brands.

In a January 2017 release by Yuengling, the owner of Indiana Beverage, Bruce Leetz said his “family has been in business for five generations and to be able to partner with America’s Oldest Brewery is both humbling and powerful.”

Indiana Beverage, the Valparaiso-based beverage company will distribute the selection received in the first half of the 2017 year, then will announce further information in time.

Yuengling is a fifth-generation, family-owned brewery that was founded back in 1829. Because it was a regional brewery, it was initially only distributed along the East Coast, with Ohio being the closest state for us Hoosiers to grab a few bottles. The company will begin to distribute to more states within the U.S., but the expansion to Indiana was one of the first announcements sent out to the public, and probably because there are so many Hoosiers dedicated to the Yuengling product.

Ron Bendiks of Valparaiso, Indiana claims Yuengling’s Black and Tan as one of the world’s best bottled beers, but he quickly added The Lager is also in the top list.

Bendiks saw a Facebook post about the Yuengling brand coming to Indiana and heard about the big news from the friends who used to have to haul a few cases from Ohio when passing through the state, he said.

“I am lucky to have friends out East that come to Valpo often,” he said. “I wish I had a story about a road trip to bring back some Yuengling, but fortunately, I stay well stocked between the friends that will bring it back and the friends here in Valpo who have it in their own refrigerators.” 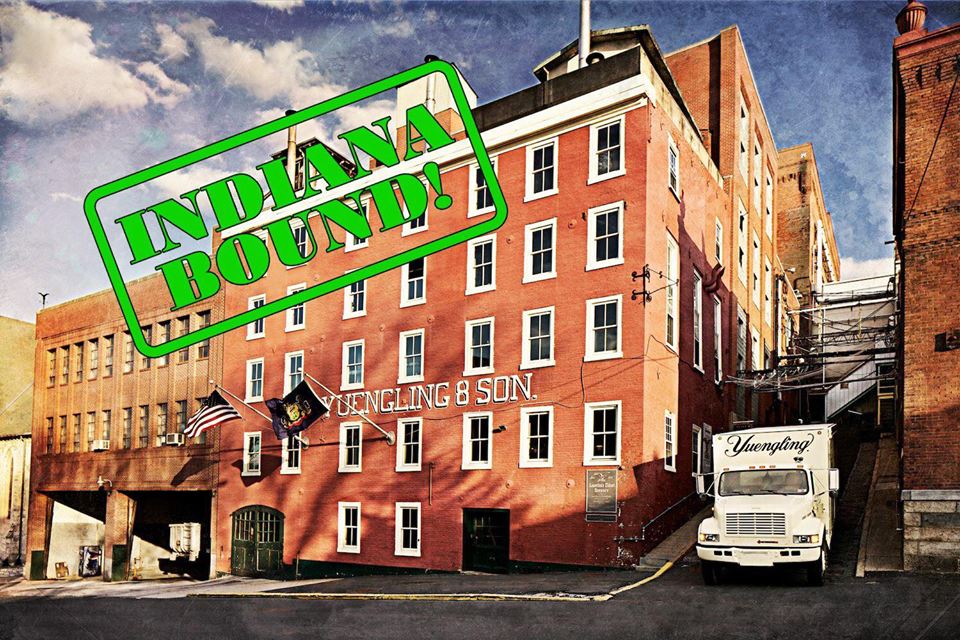 Valpo resident Leeann Wright was one beer drinker who made the trip to the Yuengling Brewery in Pennsylvania to satisfy her quench for the taste.

“We drove to the brewery and it was totally worth it!” Wright said. “We did the Brewery tour, got Yuengling swag, and had some nice brews!”

Another Yuengling fan traveled to Virginia to run the Yuengling Shamrock Marathon in March one year.

“The marathon is one of the premier races of the South,” Steve Kearney of Valpo said. “Finishers receive four beer coupons. I had to leave the race early, so I had to stop at the state line to pick up a case to make up for it.”

These dedicated beer-lovers have run and driven many miles and impatiently stalked their east coast friends for those malty aromas of the Yuengling taste for many years, but now, the agony is over.

Beginning early March, Yuengling will be distributed to Indiana's restaurants and wholesalers, allowing Hoosiers access to the beer in their home state.

Now, Hoosiers can enjoy the taste of Yuengling when they desire it. Those who have never had it before have a new experience waiting for them, and for those age-old fans, this is the thank-you for staying true to the brewery and Yuengling name over the years.

“Yuengling is very enjoyable to drink any time of the year, when you just want one beer, or sitting down for a couple of beers with your friends,” Bendiks said.

Follow the Hoosiers for Yuengling Facebook post to get the latest updates on the Yuengling beer here in Indiana. Stay up to date with the latest Indiana Beverage announcements on Facebook and through 219 Beer.