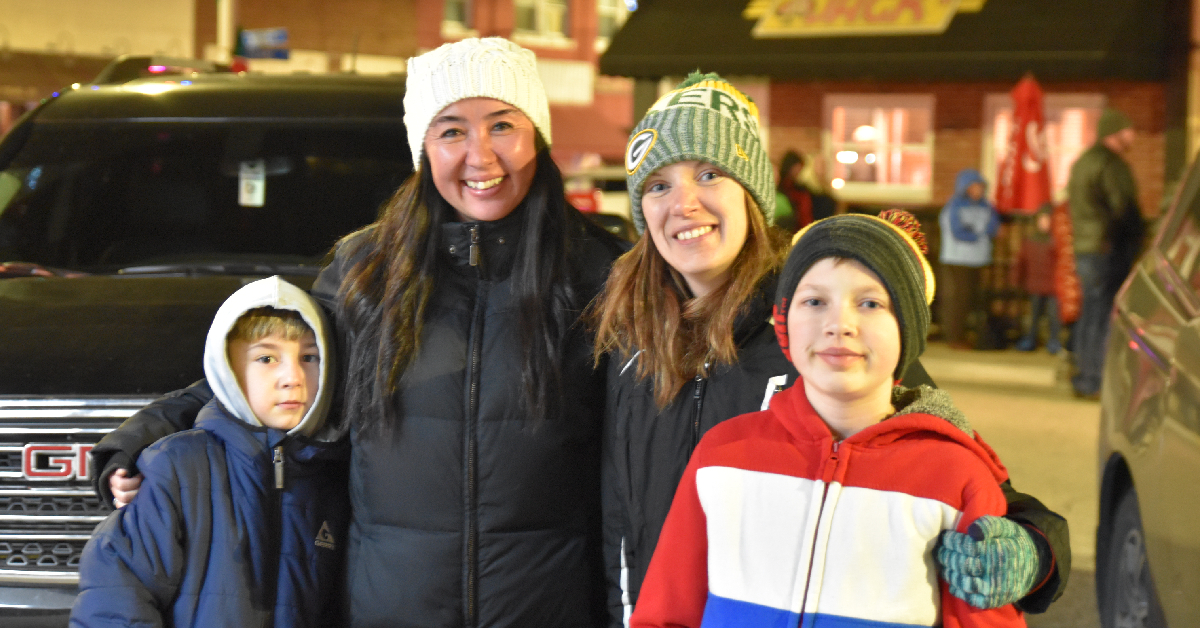 It was a wonderful time in Winamac as the inaugural Winter Wonderland lighted parade kicked off the county’s Winter Wonderland festivities. The theme, Electric Christmas, drew spectators of all ages as they lined the Winamac streets.

In the past, the parade was held during the day, so this was the first year being a lighted parade. It was Amy Cantu, owner of INKsignia, who initially proposed the idea of moving the parade to night time.

“I kept hearing that people missed the lights at night,” said Cantu, a life long Winamac resident and chairperson for the parade.

After much research, Cantu not only proposed moving the parade but came up with other family activities such as a scavenger hunt contest before the parade and a Winter Wonderland Ball the following night.

Beforehand, participants met at a staging area rigging lights to floats, trailers, golf carts, and even hanging some on dogs.

Kim Appleton, a volunteer with the Pulaski Animal Center (PAC) had never been to a parade like this before.

She and PAC volunteers were participating in the parade with a few of PAC’s dogs wearing holiday lights.

Brittney Tetzloff was decorating a golf cart to participate with her sons. Rudolph peaked over the back seat of the light-up ride.

“It’s the first year for this and I thought the boys would really like it,” said Tetzloff. “I think it’s really neat. I love Christmas.”

Sue Kast, of Millcreek Gardens Bed and Breakfast, decorated a trailer and golf cart with the help of husband Jim, and cook Pam Dooley. Coming out to be in the parade was an easy decision for them. Kast is part of the Chamber and wanted to show support.

“It’s the first year so hopefully people turn out,” said Kast before the parade.

Turnout they did, as children, with bags in hand, ran around chanting for Santa. Heads periodically peaked out in anticipation from the decorated sidewalks as holiday music played through downtown.

Brogan Bahler, a new resident to Winamac, was there with family and fellow Winamac friends. He had seen a banner advertising the event displayed on the main street. It was clear his children were excited and ready.

“We decided it would be fun for the kids,” said Bahler as his young children ran around him yelling for snowmen and Santa.

Aaron Paulsen, president of the Pulaski Chamber of Commerce was excited about the parade.

“We are small, but we are mighty,” said Paulsen. “It’s going to hopefully build more excitement for our Winter Wonderland Weekend and all the events that are happening.”

Soon the announcement came overhead. The parade was starting and Santa was on his way. Children collected treats from the floats, but it was one special treat at the end of the parade the children were most excited for. That was Santa’s arrival. Arrive he did on his electrical chariot waving to those lining the streets. Then with a wink and a nod, he climbed down and took his place on a special chair inside a warm storefront. Families piled in patiently waiting their turn to talk to Santa. Laughter rang out and cookies were eaten. Rosy cheeks then piled back out into the streets as spectators headed home.

The festivities are not stopping with the lighted parade. Winamac and Pulaski County will be bustling with holiday activities this weekend including free carriage rides, gingerbread house and cooking contests, a family-friendly Winterland Ball and many more events. Check out the Pulaski County Chamber of Commerce Facebook page for a list and times of Winter Wonderland activities.