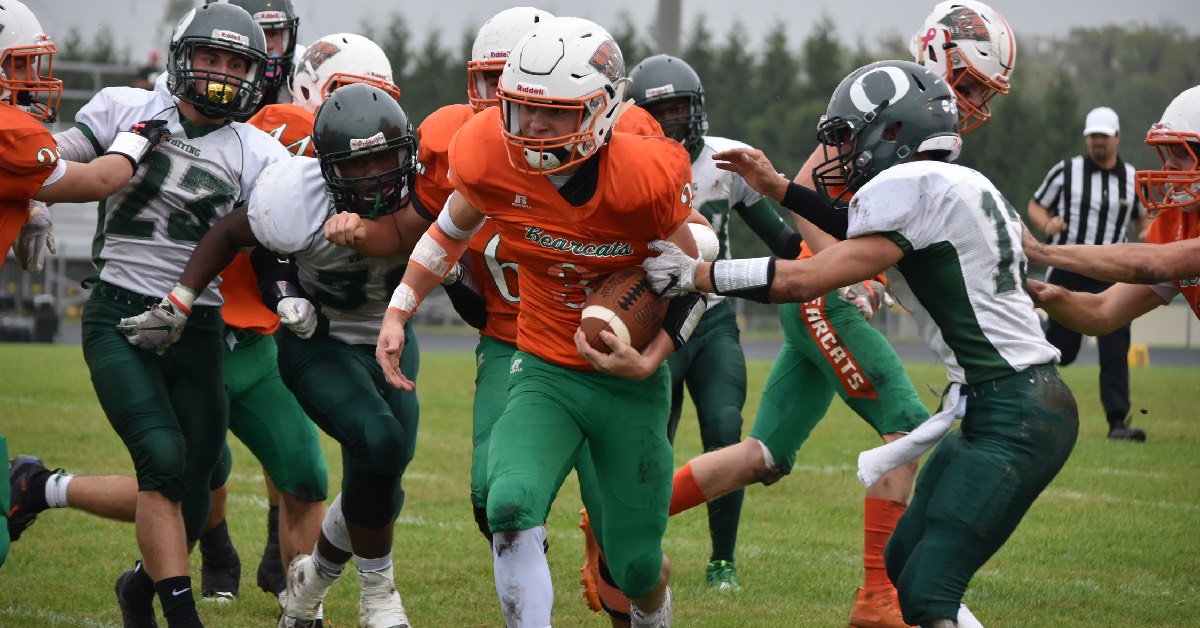 Weather or not, the Wheeler Bearcats and the Whiting Oilers were determined to play today after yesterday's Homecoming Bearcat game was rescheduled. Rain was not a concern as players prepared to take the Bearcat field and show their talents.

"I think it will be more of a mental thing" said Oiler Defensive Coordinator Trevor Reece. "I've told the kids they can't focus on trying to not slip, all you have to do is focus on playing," said Reece.

The Wheeler Bearcat's Defensive Coordinator, Tony Morrison, echoed Reece. "The field held up. Footing is good. We will stick with our same game plan. I feel positive. With the storms yesterday pushing back today it gives an extra day to prepare and an extra day of rest. "

"We run the ball so if it were to down pour, it wouldn't be a concern for us," said Oiler's Head Coach Jennings. "We are just hoping there is no lightning. We aren’t interested in coming back on Monday."

Matt Taylor was there to watch his step son, Bearcat Cal Smith. Taylor was not fazed by the weather. "It's football. It could be 27 degrees and snowing. We'll be out here," said Taylor, optimistic for the Bearcats. "I think this is going to be a really good rebound game after last week's loss.”

For both teams, it has been a season plagued by injuries, but they were focusing on the positives.

"We've got a couple of injuries. Our lineback crew is young, so when teams are running at us it's hard to stop right now," said Bearcat Head Coach Adam Hudak. "Offensively, we are doing well. We've got more of our experience on the offense end. We are excited for today. It's homecoming, we have a lot on our minds right now."

The Oilers were just as ready.

"We had a good week of practice," said Reece. "We were a lot more loose, had more fun. I think it helps the mentality of the team. There's been some growing pains. We have a lot of new players in new positions. We had some injuries that set us back a little bit. Overall, we are learning a lot," said Reece.

"We are 2 and 3. We are a little bit young. We have to find our identity a bit, but our younger guys are getting quality playing time and our older guys are getting good experience. It's getting us on the right path. We are hanging in there," said Coach Jennings.

A 36-yard touchdown attempt by the Bearcats was unsuccessful during the first quarter due to a holding call that set them back 10 yards. After replaying the down, it was second and 14 with the ball spotted on the 49. On the replay, Catherman threw to Reif, who caught it and made the touchdown. The extra point was successful by Dawson Burkart, putting the Bearcats up 7 – 0.

An additional touchdown by Bearcat Noah Bolanwoski and kick by Burkhart brought the score to 14 – 0.

With 14 seconds remaining in the first half, a touchdown attempt by the Bearcats was unsuccessful, but Burkhart's field goal brought the score to 17-0 at the half.

The Bearcat student section was slim with the weather, but those in attendance made up for it with their energy.

"We are doing good. I'm very hyped!" said Olivia Makatura at half time.

The Oiler's did not need a pep block on their side as their loud cheering led to their first touchdown early in the second half, courtesy of Diandre Marshall on the carry. The extra kick was no good, bringing the score to 17-6 Bearcats.

Yet, the Bearcats were not in any way ready to back down. With 3:32 left in the game, Bearcat’s Bolanwoski scored a touchdown, with another successful kick by Burkart, bringing the final score to 31 – 6.

In the end, it was a homecoming win on home turf for the Bearcats.