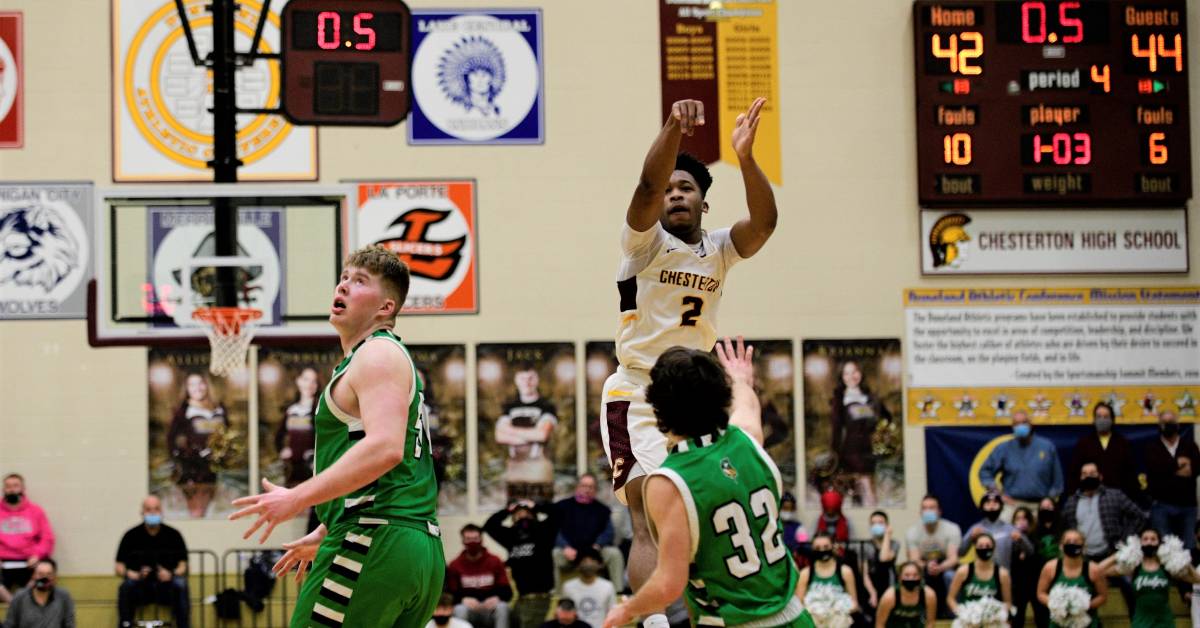 From the start, the 2021 boys basketball sectional playoff was going to be fierce, with the Chesterton Trojans hosting the Valparaiso Vikings on their home court. The Trojans stepped onto the court with a winning streak of more than 30 games won.

At the start of second quarter, Valporaiso tied up the game briefly, but it wasn’t long before Trojan's #2 Travis Grayson secured a three point basket putting Chesterton back in the lead.

At the half, Chesterton was up, with a score of 16-13. Valparaiso started the second half with possession of the ball. Shortly after, #50 Cooper Jones scored, putting the VIkings in the lead. Chesterton briefly rallied, and with two minutes and 27 seconds left in the third quarter the crowd was going wild. When the Vikings #3 Michael Flynn successfully sank back-to-back three point baskets, the Viking fans went crazy.

The Trojans narrowed the lead when Grayson was fouled right while scoring a two point basket and sinking a free throw. The third quarter ended with with the Vikings up by six, 33-27.

The action only intensified in the fourth quarter when Trojans’ #32 Tyler Vanderwoude sank a two point basket bringing the score within one point, to Trojans 42, Vikings 43 with a minute and 27 seconds left. From there, several time outs were called, and with seconds left, Vikings #4 Breece Walls was fouled and sent to the free throw line. He successfully made his free throw, scoring the last point of the game and putting the final score at Vikings 44 - Trojans 42.

Valparaiso coach Barak Coolman was pleased with the Viking’s performance against their rivals.

“Chesterton is really hard to beat on their home court. They are very well coached,” said Coolman.

For Coach Coolman there was a standout player.

“Mason Jones, Colton, and Cooper Jones had great performances as usual, but Michael Flynn hitting those two big threes during the third quarter was really huge for us!” he said.

#33 Mason Jones echoed Coach Coolman's thoughts when it came to Flynn. Seeing Flynn score the back-to-back threes was the highlight for of the game for Jones.

“I’m still rattled. That was crazy,” said Jones. “I knew we would win but I did not expect it to go like it did.”

While some Trojan senior players tearfully bid their home court farewell with their parents and loved ones by their side, the Vikings are already thinking ahead to their upcoming game against Crown Point.

“It was a close game the last time we played the Bulldogs. We know they can hit shots and go on runs,” said Vikings #32 Rowland Sorrick. “We need to practice hard and stay focused. It’s not going to be an easy game by any means. We really have to bring it to them to be able to pull out a victory.”

Top scorers for the Trojans were Tyler Parrish with 14 points, Tyler Vanderwoude with 13 points, Charlie Eaton with six points, and Luke Lombardini with five points.

Top scorers for the Vikings were Colton Jones and Mason Jones with ten points each, Cooper Jones with nine points, and Michael Flynn with six points.

The Vikings will face the Crown Point Bulldogs at Chesterton on Friday, March 5.