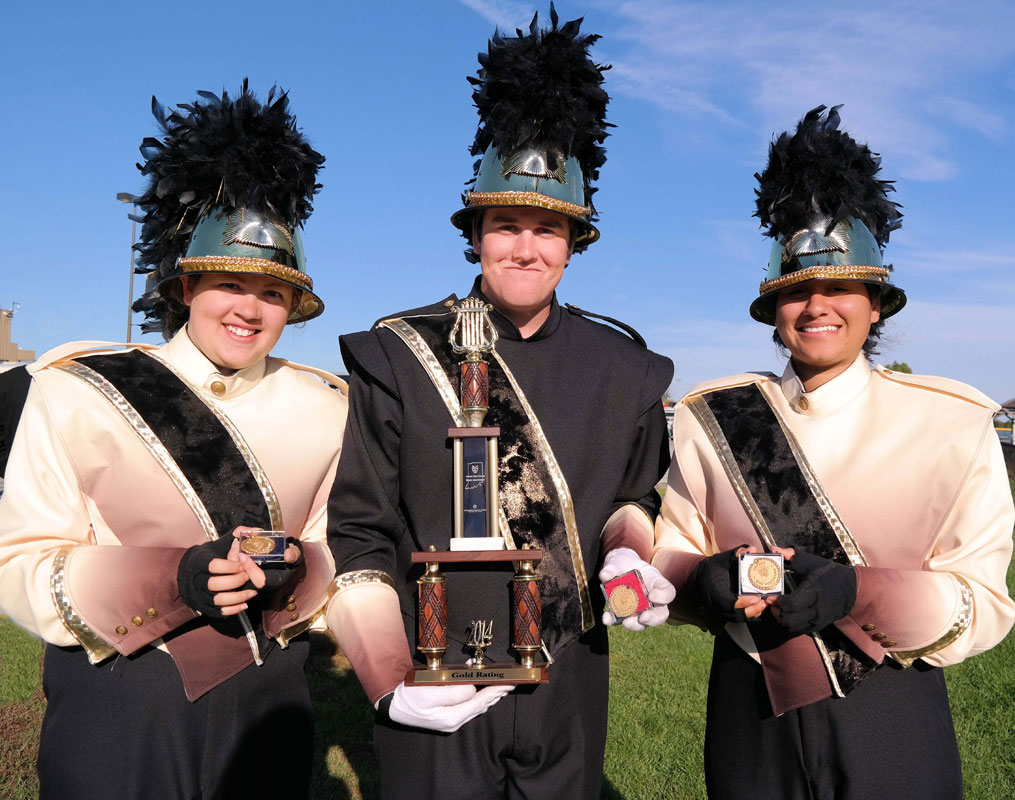 The Trojan Guard put in an excellent performance at Saturday’s competition, the band scored high enough to receive a Superior “Gold” division rating and the opportunity to advance to the ISSMA Scholastic State Finals competition. The group also achieved high enough point totals in each judging caption to receive the highly coveted “With Distinction” medals in Music Performance, Visual Performance, and the area of General Effect. The Trojan Guard was the only Scholastic “A” ensemble to medal in all three of these captions at the Homestead competition. “This production is very different for us, and frankly, we’ve been playing a bit of a competitive “catch up” game this season. But, our kids have worked hard and they’ve continually kept their eyes on the long-term goals for their motivation,” said the band’s director Michael Scheiber. “After their success this weekend, I think we’re all really excited again, and motivated to keep pushing toward the State Finals competition,” he added. The Trojan Guard’s 2014 field show entitled, “The Gilded Cage,” is all about birds. The production is in four musical movements Mvt I - “Out and About”, Mvt II - “Fights on the Wing”, Mvt III - “Riding the Thermals”, and Mvt IV - “Plumage Unfurled”. The field show features many electronic effects along with some beautiful and unusual equipment work by the 32 members of the group’s Color Guard.

This event marks the first level of statewide competition for the Scholastic “A” and Scholastic “B” Class bands, with two additional competitions taking place simultaneously at central and southern locations around Indiana. All Indiana bands are adjudicated by a panel of six national caliber judges in the areas of Individual Music Performance, Ensemble Music Performance, Music Effect, Individual Visual Performance, Ensemble Visual Performance, and Overall Visual Effect. 15 Scholastic “B” bands and 20 Scholastic “A” bands from across the state have earned composite scores high enough to qualify for a Superior “Gold” division rating. These bands will move on to the ISSMA Scholastic Finals competition held at Lawrence Central High School in Indianapolis on October 25. The two Scholastic Class Champion bands from the Lawrence Central finals will then perform in exhibition at the Open Class State Finals in Lucas Oil Stadium on Saturday, November 8. Immediately following their performances, the two groups will be recognized with an award ceremony honoring their achievements as the ISSMA 2014 Scholastic “A” and “B” Class Champions.

The Trojan Guard is under the direction of Michael Scheiber with assistance by Vincent Arizzi. Additional staff includes Color Guard Director Lisa Scheiber and Drill Design Jeff Wroblewski. For additional information regarding the Trojan Guard or any band activity, please contact the CHS Music Department at 983-3730.

The CHS Music Department and Band Boosters are currently looking for alumni and parents of alumni to assist with the hosting of our ISSMA Regional at CHS on Saturday, October 19. 24 Class “B” and class “D” bands are scheduled to compete throughout the day and a great deal of help is needed to make this event a success. “This is a wonderful time for alumni to get involved again and to remember the days when this organization helped to shape their lives. If they can pour soft drinks, park a car, make change, put a hotdog on a bun, or guide a band, their help in supporting the members of today’s Trojan Guard is needed and it will be greatly appreciated,” said Scheiber. If you are interested in assisting with the Regional, you are strongly urged to contact the CHS Band Booster Chairman Merrie Peterson at 219-405-1795 or Kris Engel at 219-764-4480 at soon as possible. For more information contact the CHS Music Dept. at 983-3730 ext. 7172.