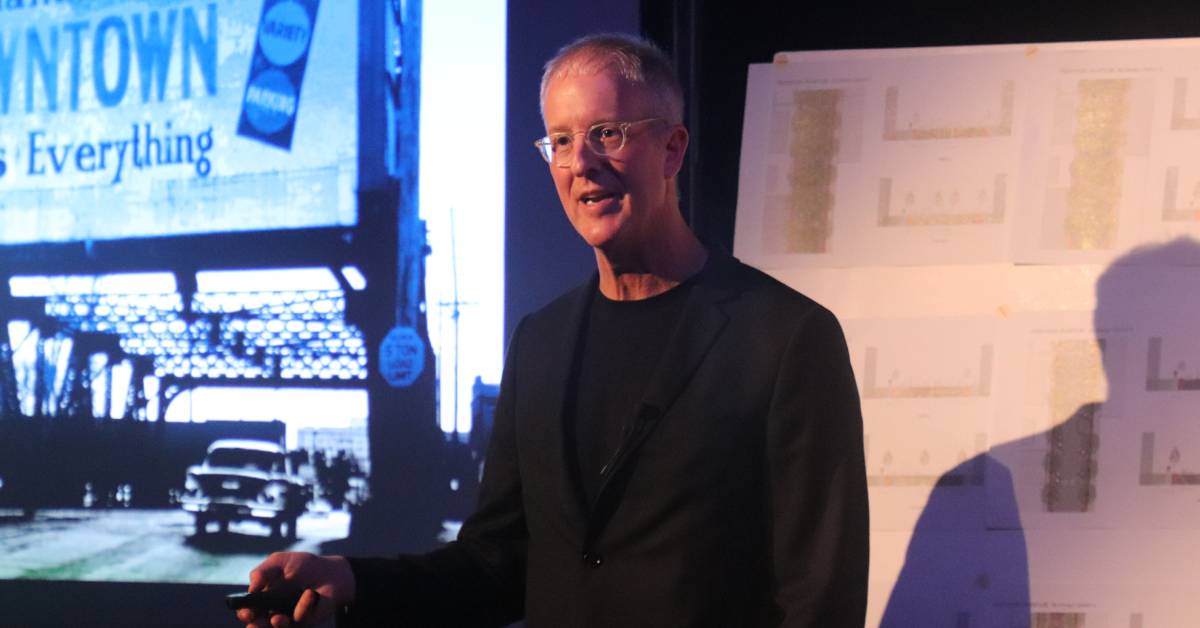 “Hammond is a city where its heart, its center, its historic core is not what it could be,” Speck said “But the bones are really good, and it’s the kind of place, at least physically, that people are moving back to now.”

A major component of the plan involves making more housing available within walking distance of the downtown area.

“We want to bring life back into the streets of downtown Hammond, and to do that today relies heavily on folks that live within a five-minute walk,” said David Dixon, vice president and director for Stantec Urban Places. “If we can get about 1,000 housing units within that five-minute walk, we could bring a block of the main street to life. This is why downtown retail looks more promising today than it has in the past 50 years.”

Among other major changes, the plan largely centers around “restriping” the city’s streets. By minimizing the width of many roads and using the space more optimally, the city can provide safe bike lanes, walking space, and parking spaces for the soon-to-be increasingly commercialized central street of Hohman Ave.

“I think the different parking structure for Hohman Ave. is a fantastic idea,” said long-time community member Shawn Manner. “I also really appreciated the bit about more affordable housing options because while upscale urban housing works well for some, it doesn’t for others, and I think the demographic of Hammond needs both.”

“I’ve been a 15-year resident now, and I’m just extremely excited to see what Hammond has to offer,” Manner continued. “I believe this place has incredible possibilities, and I think it’s time for us to start moving forward with progress and a nice vision. The prospects for this plan are amazing and I’m very excited to see it all come through!”

The entire process will happen in five phases spanning out over a total of 12-15 years, but results could be seen as soon as the next 1-5 years. A major factor is the possibility of adding a train route that will run right across from the heart of downtown, and be able to transport people from downtown Hammond to Chicago and vice versa. Though this portion of the plan is still in the works, Speck and his team have high hopes for its success.

“We do expect a new train station in downtown Hammond, and this plan is being made with the anticipation that it will come to fruition,” Speck said. “Every month we become more confident that it will become a reality, and that will be a huge positive for this area’s development.”

“From our perspective from the City of Hammond, we’re really exploring the potential of what our downtown can be,” said Anne Anderson, Director of Economic Development. “Jeff Speck and his team have a great outside view of the city; they love Hammond and are coming up with some great ideas. The potential train station coming in is like the cherry on top of all of it.”

A group of over 120 community members filled the Towle Theater to attend the presentation, and were excited to see the results take shape in the near future.

“As an older member of the community I remember the good old days of this city,” said Hammond resident Kathlene H. “I hope something is able to revitalize Hammond and bring it back to life, it would be very nice to see that happen.”

Many other audience members shared similar sentimental connections to the area, and would love to see it flourish again.

“The very first home I ever bought after leaving my parents’ home was in Hammond,” Nissan said. “Now, in my job at ArcelorMittal, I’ve gotten to know a lot of the people that work for the city. They’re amazing people with a lot of energy and I love to come out and support their progress.”

“I am blown away by this proposal and can see the economic development opportunity that it can bring.” Nissan continued. “It’s really amazing and exciting to hear that this is in motion and there are developers committed; I don’t see any reason why this can’t happen, and I’m on board for it!”

“It feels so wonderful to see people coming in and reflecting our excitement about the project,” Anderson continued. “We’re going to have a lot of local support behind us, which is exactly what we need to make this happen.”

To follow the city’s redevelopment journey, give your feedback, or learn more about the project, visit http://www.gohammond.com/downtown/.