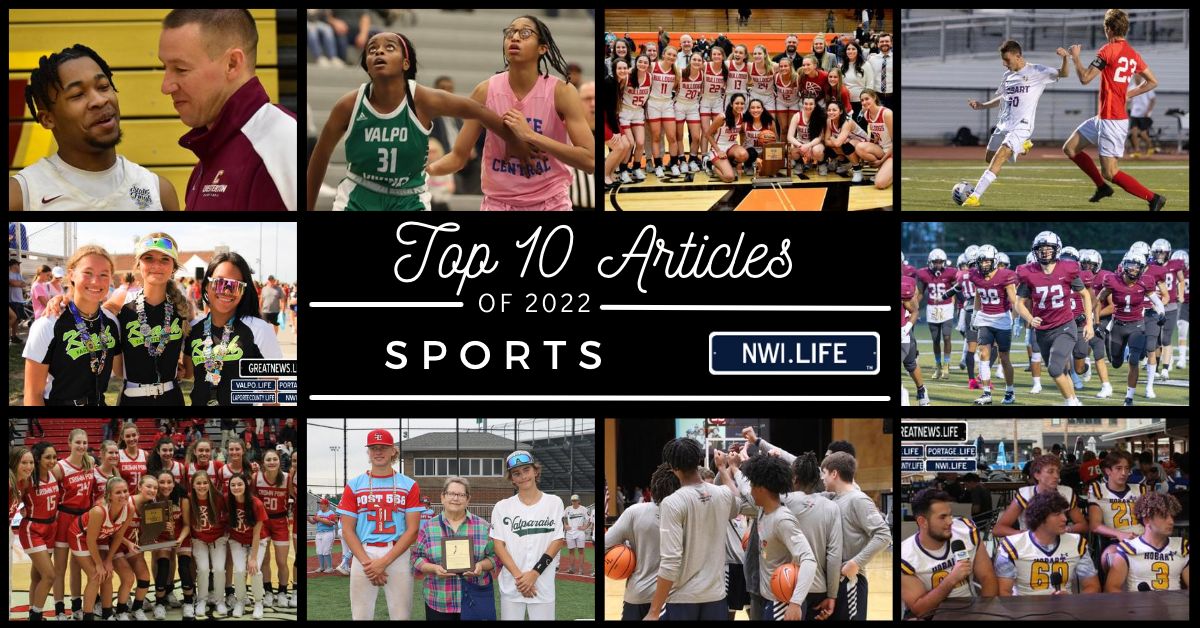 Football, basketball, volleyball, golf, soccer, cross country, gymnastics, wrestling, swimming, track & field, and more filled our feeds this past year, featuring all the good news about our Region athletes in their respective sports. There is so much talent to go around in our area, and we had a blast attending games, matches, meets, and more to help others see the action from a unique perspective.

Whether it was state championships, basketball invitationals, gymnastics sectionals, regional tournaments, new clubs, or anything in between, we shared it all in 2022 on behalf of the high schools and colleges that make our Region proud.

In no particular order, here are the top 10 sports articles on NWI.Life to recap the good news in 2022!

"The game plan is to score more points. They're [Lake Central] a great basketball team and it's going to be a great match-up. Both teams are defensively oriented and it's can we take care of the ball, work the clock a bit and make sure we don't let them dribble penetrate. They're so quick," said Coach Candy Wilson.

"Lake Central is playing really well right now, so the big key tonight for us is we're going have to be very physical, play sharp and smart and take care of the basketball," said Coach Barak Coolman.

The Lady Bulldogs are champions once again – securing their fourth straight basketball sectional title on Tuesday night in a 50-48 victory over Merrillville.

“[The girls] knew what was at stake – their season,” said Chris Seibert, head coach for the Lady Bulldogs. “They’re prolonging their career, defending their state title. What a tremendous accomplishment to defend your home floor night in and night out consistently against all the different teams that they’ve faced. But this was all about surviving, advancing, and winning a sectional.”

The Crown Point and Lake Central girls basketball teams fought for the title of Class 4A Regional Champions at La Porte High School Saturday night. The two teams were respectively first and second in their conference both having made it to regional finals. There was concern about whether or not the Bulldogs could once again claim the title.

As a demonstration of bringing community, civic engagement, and an ethic of service into focus, players gathered at the Valparaiso High School Baseball Diamond for Sunday afternoon’s 2022 Legion Championship.

Stevensville, Michigan Post 568 edged out Valparaiso Post 94 for the Indiana Juniors Legion State title early Sunday night 5-2 at Valpo High School behind the strong arm of Brody Brewer. The 6’ 5” ace on the bump stimmed the Valpo rounders in the championship game tossing a four hitter. However, neither the rain-soaked weekend nor a second-place finish could take the shine off the event for Valparaiso Head Coach Chad Bush, who felt nothing but a sense of a job well done for his squad and the team of volunteers who made the event a huge success.

Opening day consisted of teams, parents, and supporters coming together from all over the midwest to take part in, or spectate a skills competition, as well as DJ entertainment, pin trading, and vendors including World Series Apparel and Diamond Sport Gear.

With just over a week to go before football season in NWI kicks off, Region Sports Network hosted their annual Preseason Pigskin Party at Set ‘Em Up Lanes and Lounge in Griffith. Both a season preview and a celebration of prep football in the Region, the party gave fans a peek into the culture of the teams and a glimpse of the action to come.

Over a dozen teams dropped by the festivities, with their coaches and players taking the opportunity to do live and recorded interviews with the Region Sports crew. Coaches shared their expectations for the season – talking the x’s and o’s of their gameplans and giving status updates on their teams. The players on the other hand, shared their plans for endzone celebrations, thoughts on their teammates, and much more.

September 17 was a big night for Calumet College of St. Joseph (CCSJ). For the first time in school history, CCSJ played a college football game under the Saturday night lights. The night marked the inaugural season of CCSJ’s Sprint Football team, and the completion of building a college football program from the ground up.

Sprint Football is the same as college football but with one major difference, there is a 178 pound weight limit on the players.

On October 4, the Hobart Brickies matched up against the Crown Point Bulldogs in the first round of boys soccer sectional play. Before the game, Hobart head coach Jamie Harris described how the team felt about playing in sectionals.

“I think if there are any words to describe tonight, excited is certainly one of them,” said Harris. “Nerves are something everyone focuses on, but what we need to do is make sure we translate those nerves from our brains down into our hearts and our feet and legs. After it gets down to that and we get rid of those first couple of minute jitters, it’s time to play some clinical soccer.”

The Chesterton High School Trojans have journeyed through an undefeated record all the way to the state finals, which will be hosted at Gainbridge Fieldhouse this Saturday. The boys are on their way to the championship game after a nail biter at John Adams High School against Kokomo, where the Trojans won 42-40 at the final second in a gritty, yet thrilling battle.

Now, they have a spot in the coveted state finals game against undefeated Indianapolis Cathedral. Led by seniors and All-DAC members Chris Mullen and Travis Grayson, this team has proven on the court why they deserve to be on the big stage.

The City of La Porte kicks off day one of the U.S. Marines NIBC La Porte Invitational

On January 6, the City of La Porte welcomed local fans and elite prep basketball teams from around the nation for day one of the U.S. Marines NIBC La Porte Invitational hosted at the La Porte Civic Auditorium.

This was the inaugural kick off for the La Porte NIBC Series that saw 22 of ESPN’s Top 100 recruits for the Class of 2022 as well as the home team – the La Lumiere Lakers – take the court.