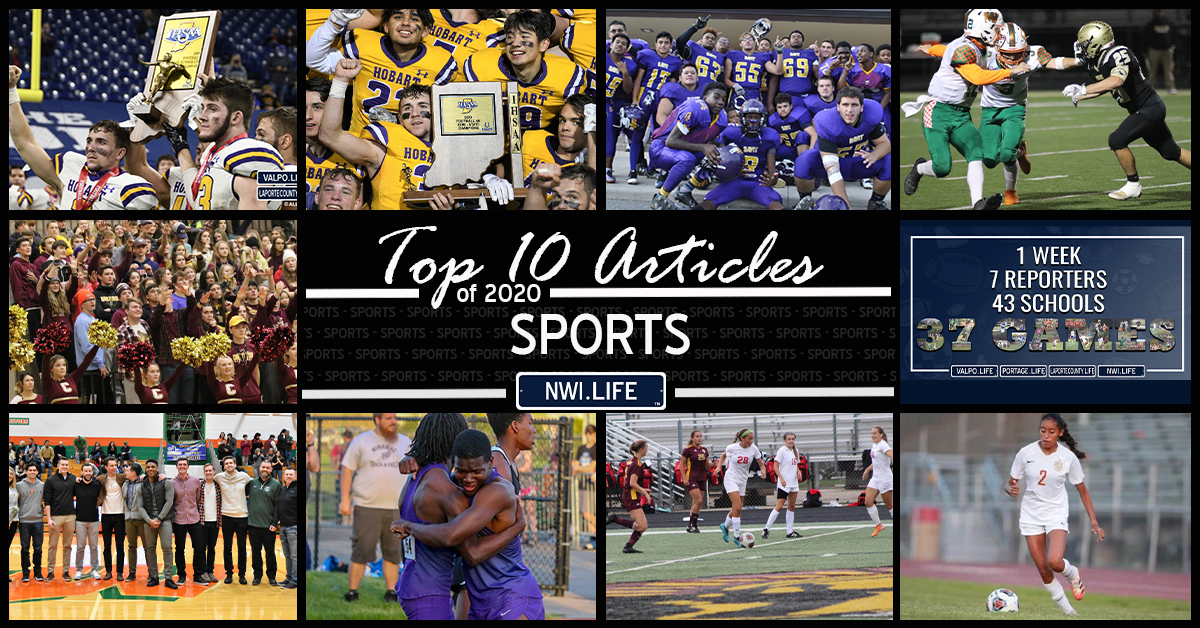 The chaos of 2020 did not stop Northwest Indiana athletes from dedicating time to their sport, showing 110% effort in every game, and giving fans something to be proud of. Whether it was football, cross country, soccer, track & field, basketball, swimming, cheerleading, dance, wrestling, volleyball, bowling, hockey, gymnastics, golf, tennis, baseball, softball, or anything in between, we captured hundreds of exciting moments at nearly every game.

In no particular order, here are the top 10 sports articles from NWI.Life in 2020:

The Hobart High School football team is now a part of an exclusive club of Indiana high school football teams that can say they have played at the IHSAA state football finals. Even more exclusive is that it was on the field at Lucas Oil Stadium. While the outcome was not what the Brickies had hoped for, the athletes finished their season with their heads held high and medals around their necks.

The Hobart High School Brickies football team have been the talk of the Region all season. The Brickies had to overcome early-season adversity on their way to their first state championship appearance since 1996. Head coach Craig Osika has built a special relationship with his upperclassmen players since taking over head coaching duties in 2018.

The School City of Hammond’s September 15 board of education meeting agenda did not include a motion to reinstate fall contact sports. But when students from Hammond, Hammond Gavit, and Hammond Morton High Schools showed up holding homemade signs and bringing hopeful energy into the room, they filled the front rows and pleaded their case - a case for an escape, for school pride, and for a shared passion for their teams.

This fall COVID-19 transformed sports, redefining everything we thought we knew about athletics. Where a once long-awaited game schedule would normally be listed now stood a giant question mark, and many teams wondered if they would even have a season at all. Now, as carefully planned games take place, coaches and players take the field each Friday with a new mentality, one they never planned for: that playing during a global pandemic means playing every game like it’s the last - because it very well could be.

GreatNews.Life dominates sports in the Region

It took 90 minutes, overtime, and some penalty kicks, but the Chesterton Trojans girls’ soccer squad came out on top over the Crown Point Bulldogs. After a 1-1 deadlock in standard and overtime, the Chesterton girls won a 3-2 penalty kick shootout to take the game at 4-3.

With the 2020 spring semester moved online, student-athletes were faced with the cancellation of the spring sports season. While some may be struggling to find ways to stay connected to their sport, many have found a way. Track athletes are continuing to run, baseball players are hitting off a tee in their backyards, and golfers are practicing putting on their indoor mats. All to continue doing what they love in preparation for their next season.

It may have been 10 years ago, but it seemed like yesterday for those who gathered to celebrate the 2010 Wheeler boys basketball team state championship win.

The Chesterton Trojans hosted the La Porte Slicers in both boys and girls basketball this spring. The atmosphere at the game showed the tradition of basketball in the whole state of Indiana with a gym that was packed full on both sides. Chesterton fans filed into the gym early to see the girls play, then stayed late to see the boys play.