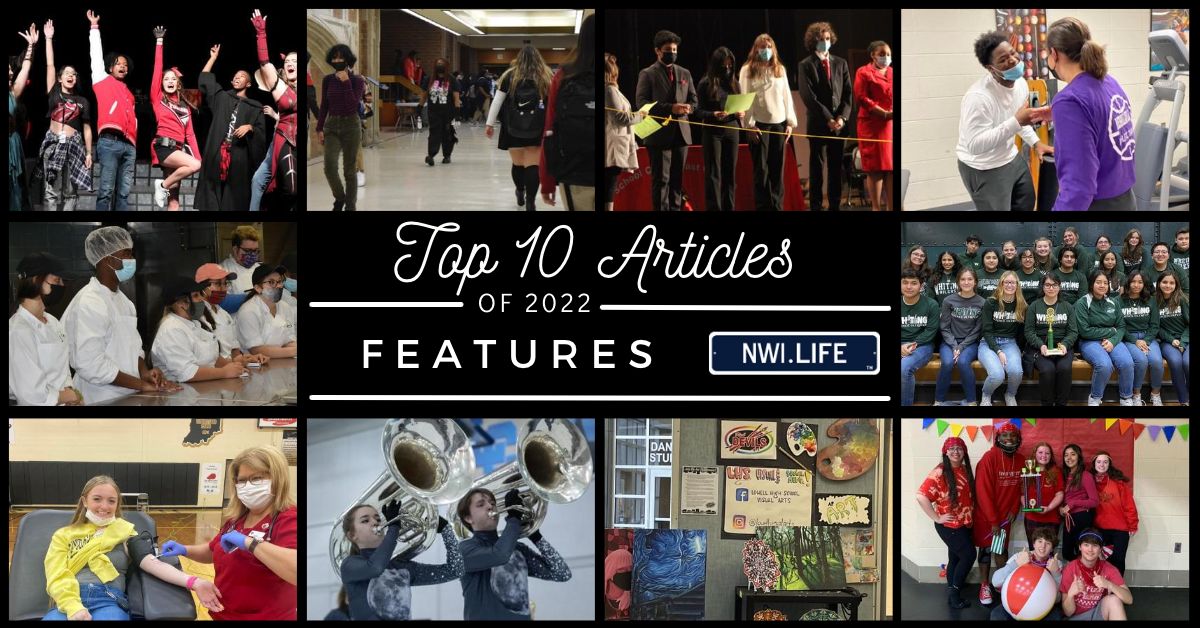 It’s not everyday that you get to sit down with a cancer survivor, a military veteran, a change-maker in the community, or a thriving high school student and get a look into what it’s like to live in their shoes. By sitting down with the members of this Region, we’re able to learn a bit more about their experiences, and also what makes them so great to have around.

It’s special moments like these that we are particularly proud to share on the GreatNews.Life sites, including Life in the Spotlights, Survivor Series, Veteran Spotlight, Leadership Life, City in the Spotlight, Voices, and more.

In no particular order, here are the top 10 feature articles on NWI.Life to recap the good news in 2022!

#1StudentNWI: Cooking up success at the Hammond Area Career Center

The culinary arts and hospitality program has been working hard to perfect its techniques. Anything from frying chicken, to getting the perfect julienne cut, the students learn it all. As much as students learn from their instructor, they are constantly advancing with the help provided by previous students.

Previous students, just like in any other Area Career Center (ACC) class, love to come back and share the knowledge they have continued to expand on. In December, the culinary class was able to welcome back a previous student who demonstrated how to properly make macaroons.

#1StudentNWI: Stephanie Lohman helps Merrillville High School athletes get back to what they love

The Merrillville High School (MHS) Boys’ Basketball Team began shooting forward into its season right before Christmas break. Now, 10 games into the season, the team is now excited for what the possibilities could be by the time the season is over.

“I feel engaged,” said Sophomore Basketball Team Member Jaeden Williams. “Sometimes I feel nervous until tip-off though, but then my teammates get me going and I’ll talk to like A.J [Ajanen Dixon] or Sai [Isaiah Akinyele] and they’ll get me right.”

As winter break approached, Bishop Noll Institute (BNI) students geared up to take their final exams. Monday was a review day for students to prepare for their semester exams. On Tuesday, students visited their first semester teachers one last time before taking finals. Final exams were split up over the course of three days. This was a tremendous help, as students were not overwhelmed taking their finals all in one day. It was a great transition leading into winter break for many students.

After a two-week break, BNI students were ready and excited to return to classes on January 6. While students will be virtual for two days, they will use online learning to continue year-long courses and meet new teachers for their semester classes. The BNI community is excited to return for the second semester.

The new year has started, as well as the second semester at East Chicago Central High School (ECCHS).

Everyone had to start on virtual learning coming back from winter break, but that was not stopping ECCHS. On January 12, everyone was able to be back in-person in the building safe and better than ever. The school is happy to have students back in action and in the classroom.

Lowell High School (LHS) started off the second semester by beginning the process of preparing students for the 2022-2023 school year. On Thursday, January 6, LHS held a Career and Technical Education (CTE) fair for current freshmen, sophomores, and juniors where they displayed the wide range of classes the school has to offer.

The CTE fair took place during the morning hours of the school day and gave students the opportunity to get a glimpse at the different career pathways and classes that are available to be added to their schedules as the new school year approaches in the near future.

The student council partnered with the American Red Cross and allowed juniors and seniors to donate a pint of their blood. It was the eighth blood drive at Griffith that Jenna Berzy, head of the student council, organized.

The Whiting Invitational was the 16th year that they were able to compete, and the first competition in person since before the pandemic. The team was eager to be able to participate and had been working hard in preparation for their competition. The team finished in sixth place.

East Chicago Central High School (ECCHS) has had many events happen in the last couple of weeks. On February 5, ECCHS' speech and debate team performed well in a meet. ISTEP standardized testing has also been taking place. Good luck to all students involved in the testing.

This past Saturday, February 12, there was a semi-state wrestling tournament between ECCHS and RIver Forest High School. There were some great matches between each of the teams, and everyone involved was excited to be there, whether they were a wrestler, coach, or spectator.

“I feel like this season was an absolute success. I hope next year that we consistently improve our scores again and just all around have a good time for it being my last year,” said student Maxton Swanko.

On Saturday, April 2, the Family, Career and Community Leaders of America (FCCLA) club raised over $1,000 for the Northwest Indiana Cancer Kids Foundation when they hosted their annual Dancing with the Panthers fundraising event at the Griffith Fieldhouse.

Each member of FCCLA was required to be the captain of or join a successful team, and there was a limit of ten people per team. Every team had to raise at least $200 to get into the event and each team chose a color to represent them.