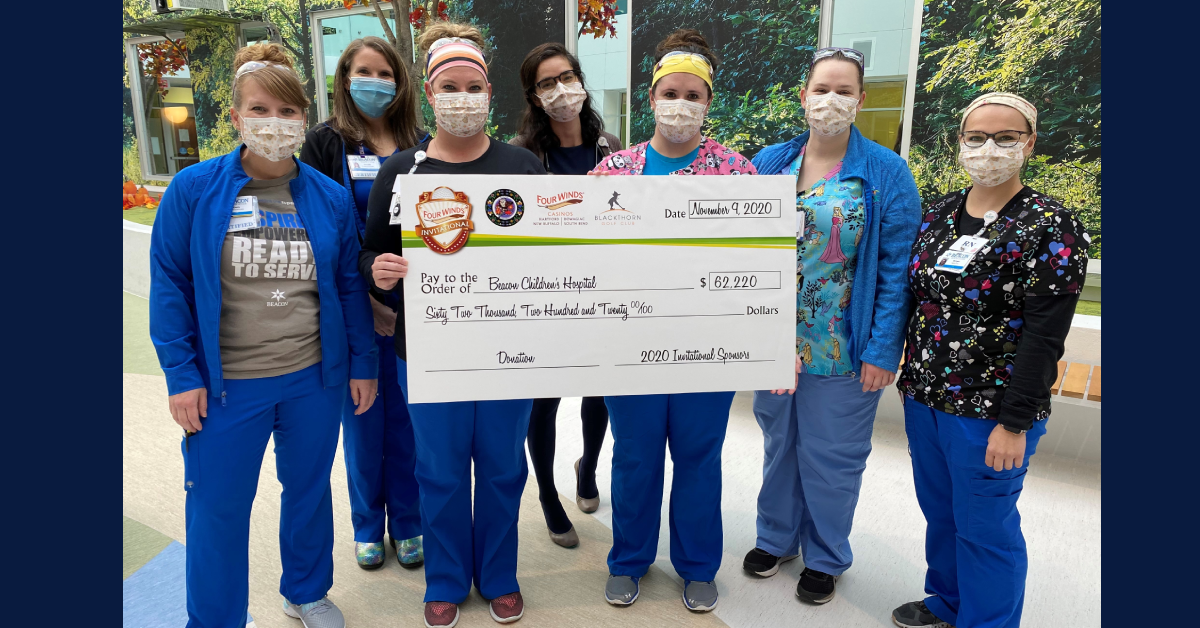 November 23, 2020 – The Pokagon Band of Potawatomi is pleased to announce that it has donated $62,220 in proceeds from the 2020 Four Winds® Invitational to Beacon Children’s Hospital. The donation will be used to help fund the purchase of CentrellaTM Smart+ Beds, which will be placed in the Pediatric Intensive Care Unit at Beacon Children’s Hospital to improve patient mobility and prevent pressure injuries, which can lead to infection and increased length of stay. The 2020 Four Winds Invitational, part of the Symetra® Tour – Road to the LPGA®, was held from Friday, September 4 through Sunday, September 6 at Blackthorn Golf Club. The Pokagon Band has donated $734,720 to Beacon Health System over the last nine years that is has hosted the tournament.

“Despite the continued health, safety and economic challenges caused by COVID-19, we are very pleased that we were still able to complete our ninth annual Four Winds Invitational tournament this year,” said Matthew Wesaw, Tribal Chairman of the Pokagon Band and CEO of Pokagon Gaming Authority. “Donating the proceeds from the Four Winds Invitational is just one of many ways we provide support to Michiana and South Bend communities, and we hope that this year’s donation to help purchase Centralla Smart+ Beds will further enhance the quality of care Beacon Children’s Hospital delivers to all the children and families it serves.”

Frank Freedman, Chief Operating Officer of Four Winds Casinos added, “In speaking on behalf of my fellow Four Winds team members, we are very proud to have been able to plan and organize the Four Winds Invitational for the last nine years. Even though the tournament looked completely different this year, there was still the same high level of enthusiasm from our employees, sponsors and players, which helped us complete another successful event.”

“On behalf of everyone at Beacon Health System, and most importantly our pediatric patients, we want to thank the Pokagon Band of Potawatomi, Four Winds Casinos, and Blackthorn Golf Club for their commitment to children in our community,” said Susan King, President of the Beacon Health Foundation. “Today the need is greater than ever, and their partnership helps us provide children and families in our region with hope and healing close to home.”

“The Four Winds Invitational is firmly established as one of the premier events on the LPGA Symetra Tour and despite the various challenges caused by COVID-19, including having to reschedule the tournament for a later date, completing the tournament was a testament to the commitment of the Pokagon Band and its Four Winds Casinos to give back to the community,” said Tim Firestone, CEO of Blackthorn Operating Group. “It truly was a great collaborative effort by everyone involved, while still making it enjoyable for the players.”

In previous years, Beacon Health System has used funds from the Four Winds Invitational to help build a multi-story building above the Memorial Leighton Trauma Center for the General Pediatrics Unit, Pediatric Intensive Care Unit, Newborn Intensive Care unit, and Pediatric Hematology/Oncology
Clinic. Funds have also enabled Beacon Children’s Hospital to purchase a pediatric ambulance, a portable ultrasound for the hospital’s MedFlight program, an incubator and giraffe warmers for the NICU, patient simulators to assist with educating and training area pediatric healthcare professionals, and power lifts for the pediatric ambulances.

About the Four Winds Invitational

The Four Winds® Invitational was established in 2012 as part of the Symetra® Tour - Road to the LPGA®, and is sponsored by the Pokagon Band of Potawatomi Indians and its Four Winds® Casinos. It is held at Blackthorn Golf Club, located at 6100 Nimtz Parkway, South Bend, Ind. The tournament features a field of professional women golfers from around the world. More information is available at http://blackthorngolf.com/symetra/ and https://www.symetratour.com/tournaments/four-winds- invitational/overview.

About The Pokagon Band of Potawatomi

The Pokagon Band of Potawatomi’s sovereignty was reaffirmed under legislation signed into law by President Clinton in September of 1994. The Pokagon Band is dedicated to providing community development initiatives such as housing, education, family services, medical care and cultural preservation for its more than 5,700 citizens. The Pokagon Band’s ten-county service area includes four counties in Southwestern Michigan and six in Northern Indiana. Its main administrative offices are located in Dowagiac, Mich., with a satellite office in South Bend, Ind. In 2007, it opened Four Winds Casino Resort in New Buffalo, Mich., followed by Four Winds Hartford in 2011, Four Winds Dowagiac in 2013 and Four Winds South Bend in January 2018. The Pokagon Band operates a variety of businesses via Mno-Bmadsen, its non-gaming investment enterprise. More information is available at www.pokagonband-nsn.gov, www.fourwindscasino.com and www.mno-bmadsen.com