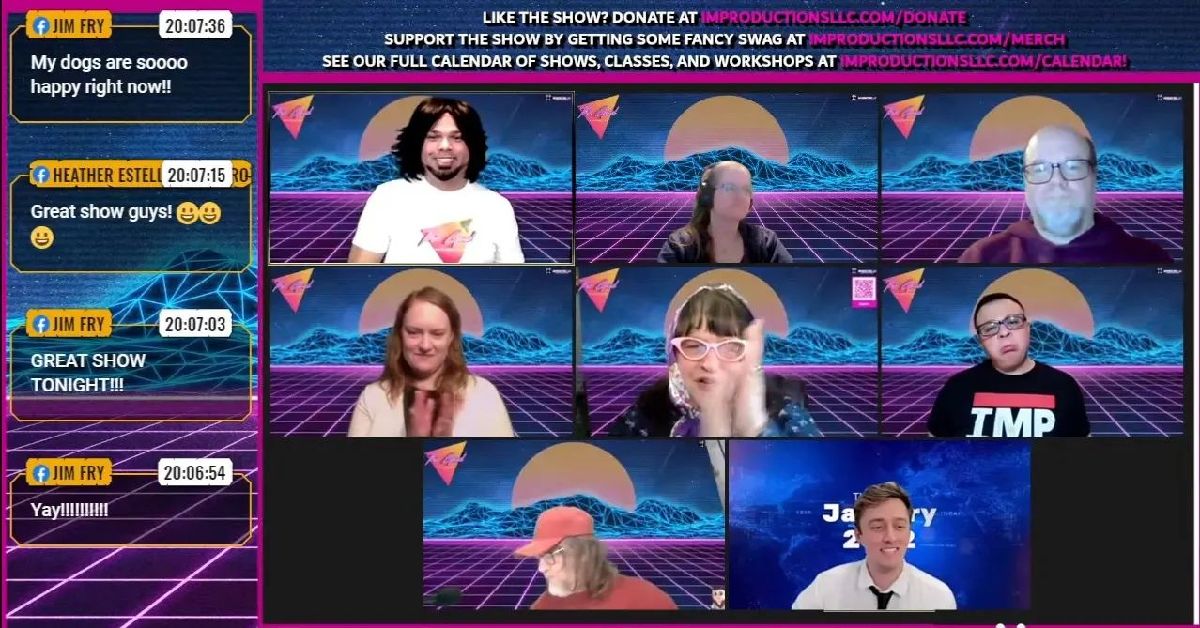 COVID-19 wholly annihilated some of the mediums through which people stimulate themselves with entertainment. Along with the closing of schools and cancellation of sporting events, theatre as a whole was completely altered, especially the way in which theatre companies performed improv shows. One foundation, however, kept its improv group’s performances up and running, even in the face of a worldwide pandemic.

Theatre, since its inception, has been known as an exclusively in-person art form, not virtual. In spite of this, the Northwest Indiana Excellence in Theatre Foundation found a way to maintain traditions, and the methods excelled.

With its stellar improv group, Improductions, LLC,  the Foundation discovered a route where it was able to rock the virtual world, beginning with virtual performances in place of hosting in-person. Those shows ran every Saturday throughout the heavy downpour of COVID, and things worked splendidly.

“We've been active in the area since roughly 2017, doing live improv shows. About four days after they shut down everything in Indiana, we came up with the idea to keep the shows going, but virtually. It just made sense. Improv, in itself, is about adaptability; it's about being able to go with the flow, and what better way to showcase what improv can do than to go from being 100% in the real world to 100% online in the middle of a pandemic?”  Nelson Velazquez, CEO and operational manager of the improv group, Improductions, LLC, said.

A tough reality to face when COVID-19 was in its prime was the notion that things still needed to keep moving. The ebb and flow of jobs and schooling, for example, could not stop. It was a scary issue to face head-on, but resilient groups like Velazquez’s were able to keep up.

“I used the opportunity of going virtual to allow my actors to have the opportunity to continue performing, continue exploring, and allow other people outside of the organization to be able to learn from us or perform with us, while all of us were trying to deal with a really bad situation,” Velazquez said.

During those trying times, the question of whether or not virtual performances could keep the ship afloat with positive audience engagement could not be excused from the equation of the vision of maintaining the group’s consistent Saturday shows. The remarkable 600 performances a year couldn’t afford to merely disappear out of fans’ minds for good.

“I think the audience's reactions have been interesting. To this day, it's very difficult to gauge audience and their expectations. Initially, of course, everybody was on board; everybody was like, ‘oh, my gosh, this is so great,’ and we quickly realized after we started doing it for a few weeks that gauging what audiences think is at least one or two steps removed. What I mean by that is, when I go to a theatre and I perform in front of a group of people, they laugh, and I could hear that, and I could see it. We removed that, though, and we're doing it over Zoom, YouTube, Facebook, and now we're relying on a chatbox to tell us whether or not we're doing well. It’s now so much more trickier,” Velazquez said.

In the age of a digital renaissance, keeping one’s attention becomes challenging with each new day that the sun brings. That said, companies of all sorts had to adjust to the foreign needs that COVID brought with its online, virtual plague.

Along with factoring in people’s unique attention spans, when it comes to performance, the difference between performing shows with a united cast in-person versus through a computer screen is astounding – but, again, Velazquez was able to bring his talents into the harsh working world and do what he does best: improvise.

“We now have members from Michigan, Illinois, Indiana, and, most recently, Texas. Having that many people is one of the most brilliant things that has happened to us. Because of the pandemic, I now get to play with people from across the nation or across the world, and I think that’s super dope, you know?” Velazquez said. “We weren't able to do that before. If I wanted to play with somebody from England, there were worries about getting flights and getting them over here. Now, all it takes is to jump on Zoom, and we're going to do a show together. It allows us to have different abilities, different jokes and comedy that we can explore, when you have people from different areas of the country or the world playing together.”

This improvisation has permitted merited growth for Velazquez and his group, and has also allowed them to grow as performers, to become better at what got them started on this road in the first place.

“Performing virtually has actually forced us to become better actors as a result of what we're doing, because mediums are different now,” he said. “Now you're watching us online like you would a movie, and it’s different from watching a real, live play. And that really, really hit home for us. Being able to be versatile between the two is something that we strive to do efficiently.”

To check out some of the spectacular performances and shows from Improductions, LLC, you can find them at http://nietf.org/ or https://improductionsllc.com/.