The Mishawaka Cavemen beat the Lake Central Indians 2-0 to take the regional title at Schreiber Field in La Porte, Indiana on Monday night. The fans sat expectantly in their seats to see who would go to semi-state. This game was a continuation of the game started Saturday night, which ended quickly when it was rained out. 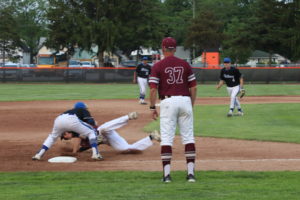 There were many great defensive plays on both teams. The Indians’ defense worked like clockwork when they were trying to get themselves out of a seemingly impossible situations. The Cavemen’s defense, however, was an even match, which caused the low scoring, very tense, game. 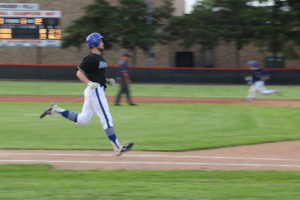 The game was a defensive struggle. The Cavemen scored two runs in the first inning and the total run count stayed stagnant the entire game. The Cavemen tried to widen their lead, but were unable to get past the Indians’ defense. 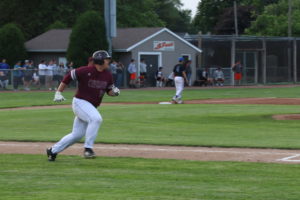 Despite the loss, Lake Central Coach Mike Swartzentruber, is hopeful for next year.

“One of our best pitchers is going to be back,” said Coach Swartzentruber, “two-thirds of our lineup will be back next year. We have the core of the team. It all depends on how much these guys want to work on the off-season.”

After the Indians’ were shut out by the Cavemen in the 7th inning, the team and fans erupted. Mishawaka fans in the stands started celebrating by singing their school song.

“It’s unbelievable,” said Mishawaka Coach John Huemmer, “This is the first time that Mishawaka has gone to semi-state since 1997. I’m on cloud nine right now…”

As Coach Huemmer was finishing his sentence, his team proceeded to pour ice and water buckets over his head while erupting into cheers. Before they left the field, two of the players took a victory lap around the baseball diamond with their school flag.

Congratulations to players from both teams on an outstanding season.