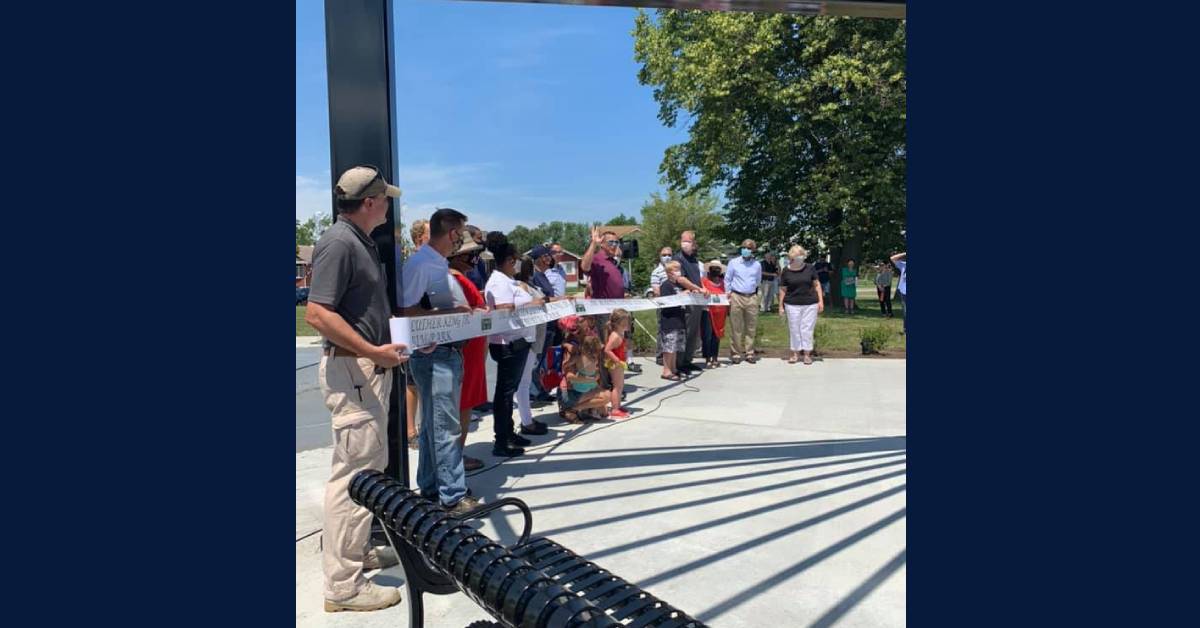 The City of Hammond and Mayor Thomas M. McDermott, Jr. continue to make park improvements to make itself a destination for recreation. One of the most recent parks that was recently celebrated was for the completion of improvements to Martin Luther King Jr. Memorial Park. This was celebrated with a ribbon cutting by Mayor McDermott, 3rd District Councilman Barry Tyler, Board of Park Commissioners, Hammond’s Ministerial Alliance, the Hammond Urban Enterprise Association and Parks Administrator Mark Heintz on July 2, 2020. Following more than a year of work, this park was updated with many new amenities for residents and guests alike.

Located between Columbia Avenue and Calumet Avenue along Highland Street, this updated park is also home to Hammond’s City Hall at the west end. This project was engineered by Nies Engineering, a local engineering firm from Hammond head by Chris Moore. It was designed by Planning Resources Inc., a landscape architectural firm from Lombard, Illinois headed by Darrell Garrison. There were two phases of construction completed by Gough, Inc. and Powers and Son’s Construction Company general contractors respectively.

This fourteen acre park had improvements made to all areas of the park. A tribute memorializing Dr. King with a timeline of his life in ‘Freedom Plaza’ with special recognition of his mother and wife who were so instrumental and supportive in his life. An eternal flame with memorable quotes from Dr. King sits atop ‘Freedom Plaza’. Trail markers around the resealed ¾ mile perimeter walking trail also have special quotes from Dr. King. A free, interactive water feature for cooling off and spectator enjoyment during the outdoor season. Further inspiration from Dr. King is also shown as part of the new themed playground which includes poured-in-place safety surfacing as well as referencing special times in the life of Dr. King.

Hammond’s first outdoor basketball complex with two full courts, two half courts, built in seat walls and an interactive basketball hoop tree with hoops at various heights is just west of Tapper Avenue as it flows through the park. Outdoor fitness equipment was added which encourages the community to come together for better health and fitness. New parking spaces for the park were added along Lyons Street on the north side of the park. Landscaping improvements were made in many areas including 57 new trees to the park.

Overall, this park was designed to be a community destination where park visitors will have recreation and memories, as well as areas for social media posts, for years to come.