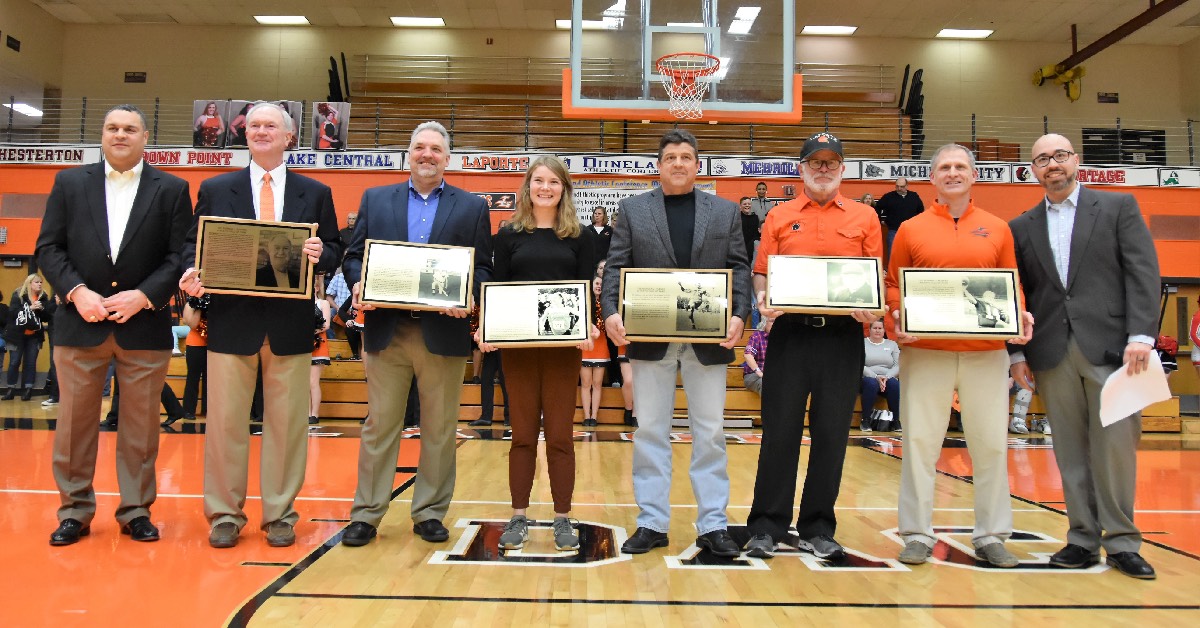 While everyone was excited, it was clear that all attendees present felt honored to be there.

“You never expect something like this,” said Greg Fruth. Fruth, already a member of the Slicer Hall of fame, was honored to be inducted into the Hubner Athletic Hall of fame. He is not about taking the credit for himself.

“I was never out on the field representing La Porte by myself,” said Fruth. “ I was always out there with ten other guys. And then when I coached, I was never on the side lines myself. I was with other coaches, the team, the players, and the managers.”

Greg was a threey-ear letter winner in football and one-year letter winner in track. In football, he played on the 1966 team, which is arguably one of the best in Slicer history. In 1965, he received the Best Blocker Award and was selected honorable mention All-Conference. Greg coached football for 28 years at levels from 7th grade up to high school varsity, and he now spends his time volunteering in the community.

“When you honor one person, you are honoring the entire team,” said Fruth. “That might be my picture, but I know when I look at that picture I see a whole bunch of people up there.”

Dick Hostetler’s son, Rock, was honored to accept the award on behalf of his late father, who passed away at the age of 38, when Rock was only four. When he found out his father was being inducted, Rock jumped on a plane to be here.

“This is the third hall of fame he has been inducted into,” said Rock.

Hostetler was a three-sport athlete for LPHS who graduated in 1950. He participated in football, basketball, and track. He was the leading scorer on the football team with a total of 55 points his junior year. He was named all-conference that year as well. During his senior season he was named the team’s Most Valuable Player, placed again on the All-Conference team, and named All-State as well.

Eddie Dubbs was a three-sport athlete who graduated in 1990. His team accomplishments are 1990 Sectional Basketball Champions and 1990 State Baseball Champions.

Dubbs never envisioned being in the hall of fame so being inducted was unexpected.

“I was very excited when I found out,” said Dubbs. “I was one track in high school and that was sports. That’s what I wanted to do.”

Dubbs was awarded seven varsity letters in three years of varsity competition. In 1989, he was All-Conference in football for the Duneland Athletic Conference. In that same season, he was the recipient of the Dr. Gardner Mental Attitude Award. Dubbs has served as a coach in various sports at various levels over the years. He has coached Pop Warner Football, Babe Ruth, and KVA Baseball.

Ed Gilliland, Director of La Porte High School Athletics, has looked forward to this yearly event since since 2007 when Norman Hubner was first inducted into the hall of fame.

“What I really like is when you induct people who this really means something to,” said Gilliland. “While it’s recognizing former Slicers that have contributed to athletics, it’s the ones that are touched by this that really mean a lot to me.”

Having graduated just six years ago, the memories are still fresh and impactful for Elena Lancioni. The track and cross country runner set multiple school records in the races: 5K, 800m, 1600m, and 3200m, of which her times in the 5K and 1600m still stand today. Amongst her many accomplishments that are too numerous to list, Lancioni went to state multiple times in both track and cross country, was named All State three times, was her team’s MVP seven times, and was the first female athlete to win three conference MVPs in any one sport in the Duneland Athletic Conference. This was all done while volunteering and maintaining a 4.0 GPA.

With all of that, it is more than memories and awards that matter most to Lancioni.

“It’s having that impact and knowing what a meaningful impact I have had at such a young age for others,” said Lancioni. “I hope that other younger women can see that and strive for that.”

In between the La Porte Junior Varsity Boys’ Basketball and the Varsity Boys’ games, the six athletes were officially inducted into the hall of fame and presented their plaques. Fans of the crowded gym stood and cheered for the new inductees. While the plaques will remain on the wall for the next year, it was clear from the crowd that the new inductees’ legendary feats will live on in the hearts of those they have inspired over the years and to come.