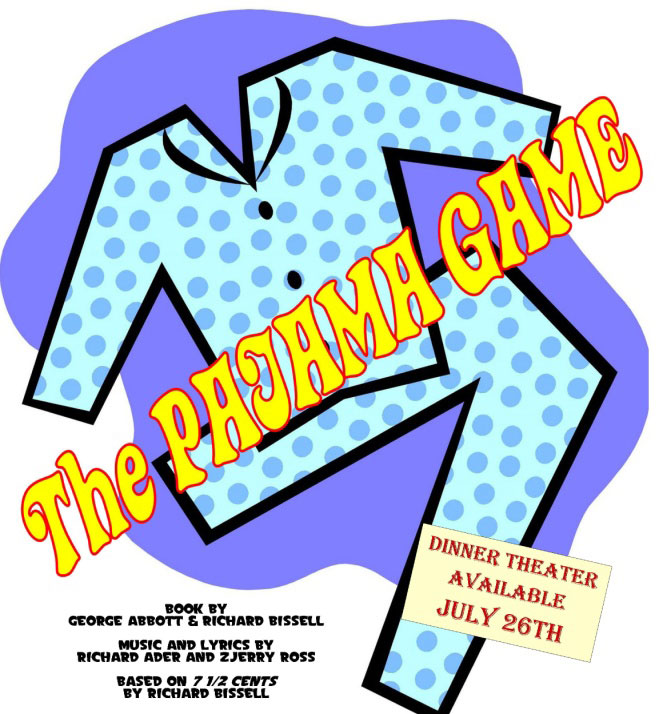 The Genesius Guild of First United Methodist Church of Hammond brings the Tony Award-winning musical “The Pajama Game” to the stage weekends, July 18-27, 2014. It’s a nostalgic trip to the 1950’s -- a time of innocent romances, a time of “company spirit," and a time when seven and a half cents actually bought something.

Billed as a "bright, brassy and jubilantly sassy show," “The Pajama Game” won the Tony Award for Best Musical when it opened on Broadway in 1954, and once more garnered accolades when it was revived in 1973, and again in 2006. Based on the novel 7 and 1/2 Cents by Richard Bissell, the show tells the story of a union fight in a pajama factory for a seven and a half cent raise, complicated by the superintendent of the factory falling in love with one of the union reps. But in the best American musical theater tradition, the boy gets the girl, the union gets the raise, and everybody sings happily ever after at the end of the show.

Although the plot now raises eyebrows in a generation trained to be conscious of relationships and harassment in the workplace, it’s a show that still entertains because of the broad comedy and the well-known music. The production numbers “Steam Heat” and “Hernando’s Hideaway” and the romantic ballad “Hey There” were so well known in the pop culture of the ‘50’s that they made the Top Ten of the Billboard chart for several weeks following the release of the musical.

“Songs [in the show] are the old kind of hummable tunes that made the Broadway musical what it is,” said Director Andy Leahy. “It is funny and heart-warming and nostalgic. Audiences will find much to laugh, love and sing in this show”

“It is one of those musicals that is just for fun,” says Leahy, whose past directing experience includes productions of “Bye, Bye, Birdie”, “Oklahoma”, “The King and I” and “West Side Story.”

“I love classic American musicals. ‘The Pajama Game’ may not be as familiar [as other shows I have directed],” says Leahy, “but it is a classic none the less. And it brought the choreography of Bob Fosse to the Broadway stage for the first time. It’s also an actor’s show with roles for young as well as mature actors. And the characters are well-defined and fun to get to know.”

The Genesius Guild production, itself a revival (last produced by the Guild in 1993),features Adam Pindrock as Sid Sirokin, superintendent of the Sleep-Tite Pajama Factory; and Kristi Peterson as Babe Williams, union representative and head of the grievance committee. Playing their comic counterparts are Ryan Graan as the factory timekeeper Hines, Hermine Marie Robinson as head secretary Gladys, and Emerson Caress as Prez, the head of the union. Jeff Erickson is the stingy factory boss, Hasler. An ensemble cast of singers and dancers, accompanied by a jazz trio, rounds out the show. Jacob Ganzer is the choreographer, and Jim Mollin the vocal and orchestral conductor. “The Pajama Game” is being presented through special arrangements with Musical Theatre International of New York (MTI).

Performances are Fridays and Saturdays at 8 p.m. and Sundays at 3 p.m. All performances shall take place in the Fellowship Hall at the First Unites Methodist Church of Hammond, 6635 Hohman Avenue in Hammond, Indiana. Admission is $15 for adults, $13 for senior citizens and students high school age or younger. Tickets are available at the door or by calling toll-free 877-724-7715. Group discounts are available for groups of 15 or more; call the box office for details and reservations. A Dinner Theatre option will be available Saturday, July 26 for an additional $13 per person; dinner will be served at 6 p.m., and reservations for dinner must be made by July 16.