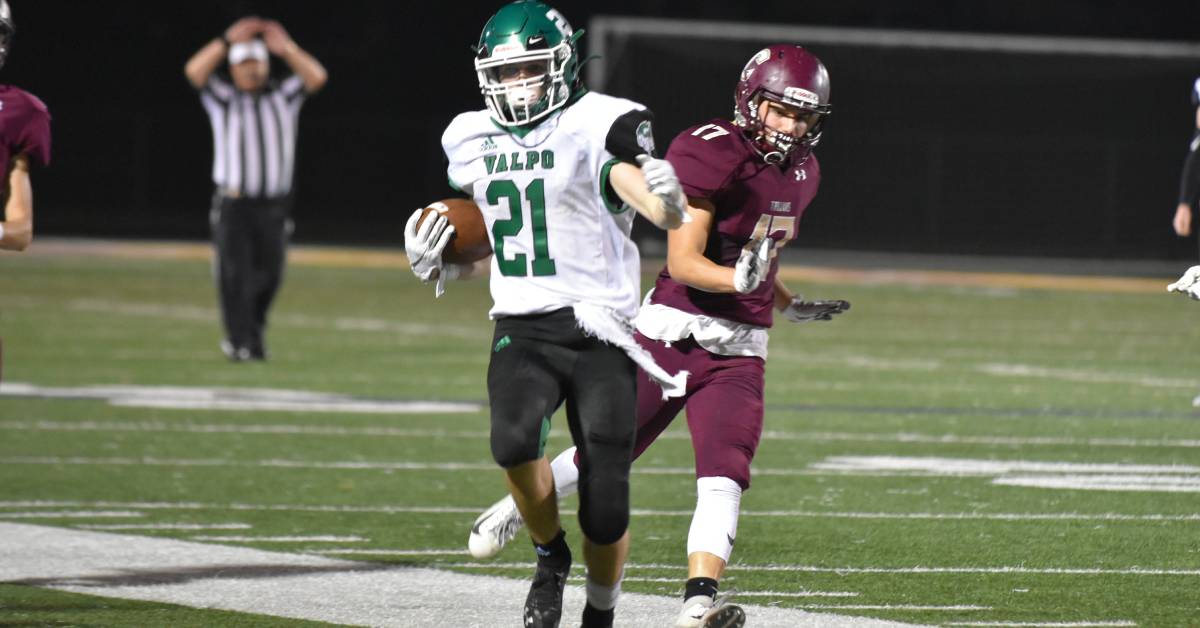 The Number 1 ranked Valparaiso Vikings took on the Number 4 ranked Trojans on their Valpo home turf. These Porter county rivals squared off on a night that saw the Vikings pep block featuring a toga night and the Trojans fans going for blackout. The Trojans could certainly be heard and if the pep block could have willed their team to win, the Chesterton Trojans would certainly have done so. In the end, it was Valparaiso that took the win with a score of 40-6.

The educators were honored prior to the start of the game and the Trojan marching band hyped up the crowd with a brief intro performance followed by the traditional Star-Spangled Banner.

The game started with Trojans having control. For most of the first quarter, the game was scoreless.  Then, with just 58 seconds left Tommy Burbee of the Vikings drew first blood. It was attack mode from the Vikings from there on out. With more touchdowns by Burbee, the Trojan's lone touchdown scored by Byrce Pickering was not enough.

"Unfortunately, we found ourselves in such long down distance," said Trojan Head Coach Mark Peterson. "We either gave up that pressure, or we checked out of something, which we had talked about throughout the week but that pressure was probably the most problematic thing.

"We are going to continue to grow from this and keep getting better, " said Peterson. "At the end of the day, I love a fight and there's a lot of heart in these kids. It's not the size of the dog but rather the fight in the dog."

Coach Peterson's wife agreed that despite the loss, the Trojan's were still not down.

"Valpo's a great team and they have a lot of solid players right now. We knew that going into it and we were just giving it our all," said Kristen Peterson. "They have a lot of heart and this is a great group of kids. They are going to regroup and be okay."

With another win under their belt, Valparaiso Coach William Marshall feels there is still more work to do.

“We have to focus on cleaning up our whole game. We had too many mental mistake penalties," said Marshall. "We lacked a little bit of focus coming and going out of the game and at the half. Regaining that mental focus and offensively staring the game on all cylinders is really important."

The Campbell/Meridian Cup went home with the Vikings as they prepare to take on Crown Point on Bulldog turf. The Trojans will face the Indians at Portage High school.