The story of Rob Henderson’s battle with cancer could fill the pages of a book. The ups and downs he experienced in his fight were not bumps in the road, but mountains to be climbed. As with every obstacle that Henderson encounters, though, he met the immense challenge head on and just started climbing.

In July of 2015, Henderson was gearing up for an anniversary trip with his wife to Rocky Mountain National Park in Colorado when he began to experience something odd. He started to feel some numbness in his backside and, considering that they would be doing some hiking and outdoor activities, Henderson knew he needed to look into the issue before heading out.

“I thought I had a back issue so I thought, ‘I gotta get this checked out!’” Henderson said. “If I sat a certain way my right side would go numb and I was also worried about my sciatica. I didn’t want to get on top of a mountain and have to call in a helicopter.”

Henderson phoned his doctor and got in for an MRI right away. The doctor got back to Henderson with, what was initially, good news that there was nothing wrong with his back. The bad news was that the doctor was going to need him to do two more MRI’s because there was a mass that showed up. It was too early to tell what exactly was going on but Henderson had already began to worry.

“I basically spent all day in an MRI machine,” said Henderson. “For the next 10 days I ended up getting CT scans, PET scans, blood tests, and more MRI’s, and then I finally got a biopsy where I found out that I had stage 3 non-Hodgkin's lymphoma.”

Henderson was diagnosed with large B-cell non-Hodgkin’s lymphoma. The cancer wasn’t fast growing or slow growing, but Henderson and his doctors wanted to get going on treatments right away.

The chemotherapy drugs that Henderson would be receiving were extremely strong and would have destroyed his veins if they were administered through an I.V. so, the following week, doctors implanted a port into his chest where he would be receiving the drugs.

“I was going in every three weeks and, one morning, I woke up and my neck hurt really bad,” said Henderson. “I look at my neck and chest and it’s beet red and extremely hot where the port was. The more I looked at it, the more I thought that something wasn’t right so we ended up going to the E.R. and it’s a good thing I did!”

It turns out that Henderson had a staph infection.

“I spent 18 hours in the E.R. and nearly went into septic shock,” Henderson said. “I ended up spending 9 days in the ICU altogether. The infection was in the port itself which is connected to one of the main arteries that is connected to my heart. They rushed me to an O.R. and the port had to come out immediately.”

Just before the doctors had come in to rush Henderson to the O.R. he had just eaten breakfast which means they would not be able to put him under to do the surgery.

“They said, ‘I don’t know how to tell you this but we can’t put you out,’” Henderson said. “They said they could give me a ‘local’ but that this is, basically, going to be a live surgery. I literally had a live surgery where they cut open my chest, dug out the port and I felt the tubes that went up over my neck and to my heart, go through my chest. It was the most intense pain I’ve ever felt in my life.” 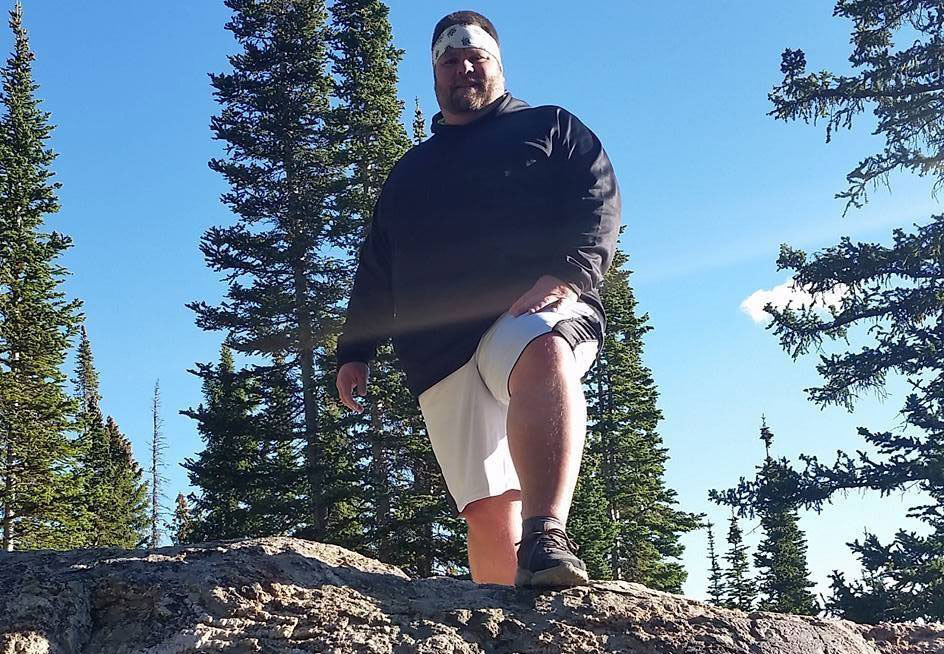 Henderson’s chest had to then heal from the inside out. He also had to administer antibiotics through an I.V. in his arm three times every day for a month.

“Because I couldn’t take chemo without a port, I went through daily radiation for a month while fighting staph infection while working every day,” said Henderson. “When that was done I had to get another port put in and start over.”

Finally, after the infection was gone, Henderson was getting the chemotherapy treatments that he needed.

Soon after, the signs of his treatments started to show and Henderson’s hair fell out as expected. To his surprise though, his co-workers had done something to show him that they were with him.

“Everybody that I work with was so amazing. My hair had fallen out on a Saturday and on Monday two of the other managers and a female [co-worker] had shaved their head. I still get emotional thinking about it now. She said, ‘if you’re going through it, we’re going through it.’”

In speaking about the support system that his family and friends provided throughout his battle, Henderson said, “I couldn’t have done any of this without my wife. She never let me see her fear or her anguish. She was so strong and she never let me get down.”

Henderson has always been a workaholic but since battling cancer, his perspective has changed.

“My love for my family and friends has taken priority,” Henderson said. “The house and the cars, none of that is as important as it was. It’s the people that got me though and the people in my life that are so important.”

“No matter how bad it is, there is a reason and some good in it,” Henderson said when reflecting on telling his story and reaching out to others going through their battle with cancer.

“I find it so therapeutic for me to tell my stories. Even though going through it brought me such immense pain like I’ve never felt before in my life, if someone who’s going through something similar can hear my story and can find comfort that no matter what, I’m smiling with my head held high on the other side. I made it through and you can too.”

Henderson continues the climb and in September of 2016, he and his wife were able to take that trip to the Rockies they had planned before his diagnosis.