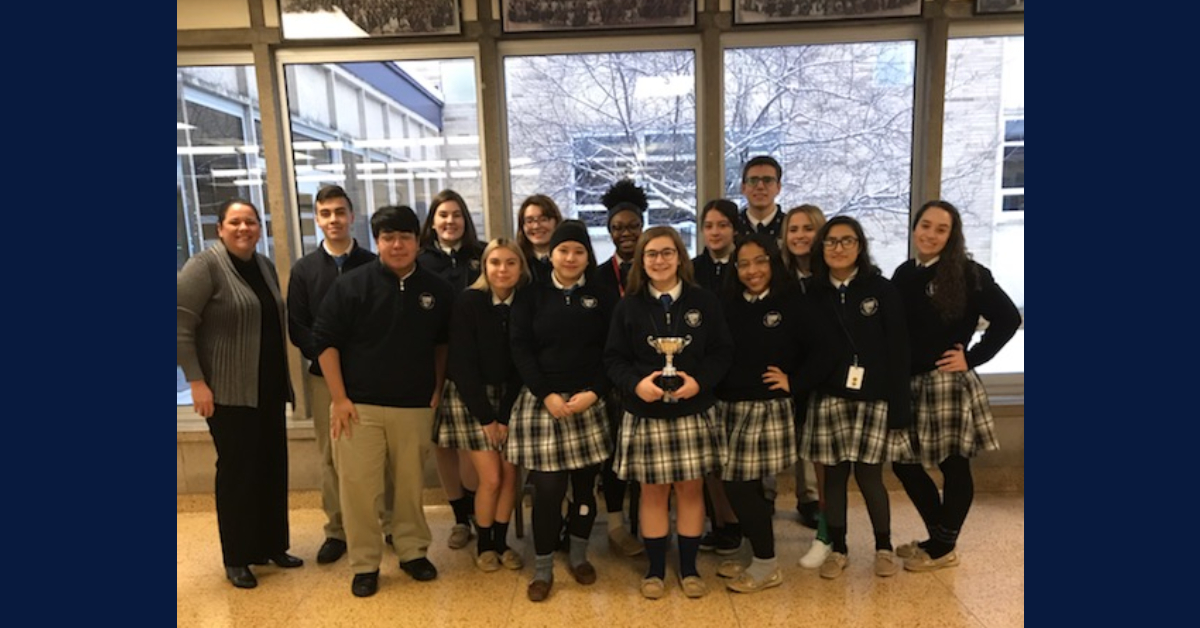 Hammond, IN – Mass, food and fellowship helped high school students bond during a recent event in the Diocese of Gary. Bishop Noll Institute students recently joined students from Andrean and Marquette high schools at a special Mass and lunch.

Stacia Bolakowski, Bishop Noll’s campus minister, has been working with campus ministers from the two other schools to do more combined events for the three Diocese of Gary high schools.

“This was the first of hopefully many encounters over the coming years,” she said. “Each school had 20 students from all grade levels attend a special Mass with our chaplain, Father Kevin Scalf, and then we had lunch and fellowship.”

Bishop Noll senior Felicity Miranda, of Schererville, said the students chosen to attend had to complete an essay explaining why they wanted to take part in the Mass.

“I was interested since it was the first one ever,” she said, adding that she is thankful she was selected.

it felt awkward when the three schools first arrived and they sat only with classmates from their own school. They were then split into groups and played games with students from the other schools.

“Afterwards, when we were all eating lunch, we weren’t as shy. I was able to make friends with a few people from Marquette. We were able to bond over stuff like Kairos and classes. We were all sad when we had to leave because we were just starting to get to know each other. But we exchanged Snapchats so it wasn’t that bad.”

Miranda said she looks forward to more activities to bring together the schools and she hopes this combined Mass continues to grow.

“I hope that becomes something that the students look forward to.”

Bishop Noll sophomore Eric Copeland, of East Chicago, also attended and said he loved meeting people from the other high schools and seeing things from their point of view.

“Everyone was so kind and energetic,” he said. “I loved how I felt the presence of the Lord all over the room. I even found out one of the students from Andrean lives in the same city as me. I definitely look forward to taking a part of something like this again. I had such a glorious time.”

“I am eternally grateful to be given different opportunities and experience different events at Bishop Noll. When I get older and look back on my past, Bishop Noll will definitely be the highlight of those memories,” he said.

Both students agreed that Father Scalf’s homily was powerful.

“He spoke about how we need to see everything and everyone as God sees everyone. When I thought about it, I realized how hard it is to do that, especially in high school. I think his homily was a reminder for us teenagers in high school who tend to focus on all the bad instead of the good,” Miranda said.

“Personally, I found that the sermon was very powerful, and not only that, but as I took a glance around the room, I found that every person was listening and really paying attention to what he was saying,” Copeland said. “During lunch time, many people were discussing how they felt a personal connection to the sermon during Mass, and that itself is very meaningful.”