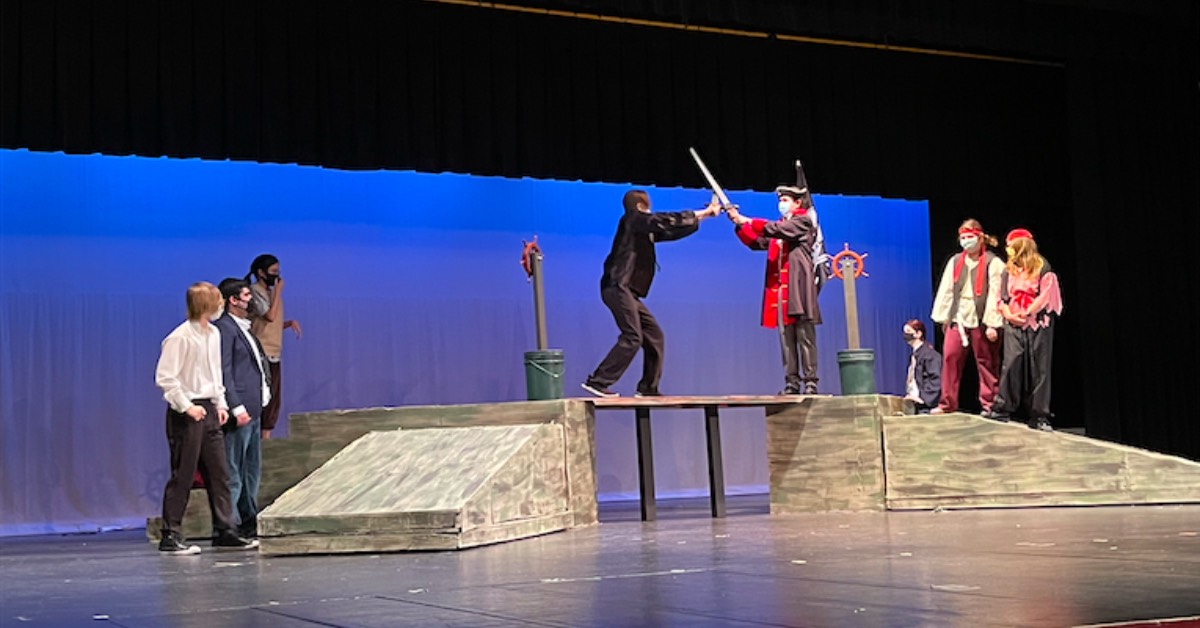 The Munster Theatre Company will close out its 2020-2021 season with the satirical play with music, Peter and the Starcatcher.

This spring’s streaming production will feature over two dozen actors and technicians from the Munster Theatre Company.  The play is a satirical prequel to Peter Pan, critiquing British colonialism as it tells the story of how the Lost Boys came to be.  The storyline surrounds a special mission that Lord Leonard Aster has to transport a special trunk on a ship to a faraway island to destroy it.  However, the evil Black Stache, known for the style of his upper lip hair, is on another ship and wants to get the trunk for the special contents inside.  By the end of act I, the crews of both ships are stranded on Mollusk Island, and no one’s life is safe.

The show is told as story theatre, meaning the actors play multiple roles and engage directly with the audience.  Additionally, scenic elements, props, and costumes are more suggestive than a play grounded in realism.

“The hardest part of working on the play is memorizing lines on time.  But I love getting to be a part of a group that treats each other like a family!”

Freshman Josh Decker plays the iconic Peter, and is in his second show of his high school career.

“I enjoy theatre and acting as a whole, and this play was a great opportunity.”  Josh took the Theatre Arts class this past year, where he honed his skills and blossomed as a performer, according to his teacher, Peggy Matanic.

“I love acting and being able to bring a character to life,” Decker says.  Throughout the play, Decker and the other performers play numerous characters and narrators to take the audience on the journey from the shores of England to their final destination.

Freshman Delaney Craig is no stranger to the stage, having performed in numerous community theatre productions over the years.  She plays Molly Aster.

“I love theatre and the arts so much.  They are my passion.  I love the people.  Working with everybody and forming not only a team and a cast, but a family, is always my favorite part of every show.”  Craig hopes to pursue performing after high school.

As part of this production, students had the opportunity to take a virtual masterclass with Celia Keenan-Bolger, who originated the role of Molly on Broadway.  She offered great advice about how to perform the high-energy comedy of the show and to form an ensemble.

Director/Producer Ray Palasz is thrilled to bring this show to the MTC stage.  “I saw this show when it toured through Chicago in 2014.  I loved the energy and the ensemble nature of the show.  The story-theatre concept also fits perfectly with the needs of this season.  The technical theatre classes typically help build the shows.  With the pandemic, however, it was impossible to balance that with the dual-platform instruction taking place.

The satire and the pop culture one-liners also help take an old story and make it fresh.  I knew I wanted to direct this show one day, and here we are!”

Though not a full musical, this show helps those who wanted to do a show with singing fulfill that desire.  A full musical this year was not a very feasible option, due to the health guidelines and safety protocols from professional music organizations during the pandemic.

The show is being recorded to be streamed at 7 PM on May 7 and 8, and 2 PM on May 9.  Streampasses are $10 for a single streampass, and $18 for a group streampass.  Additional donations to support the program will also be accepted.  Tickets can be purchased at www.munaud.org/tickets.