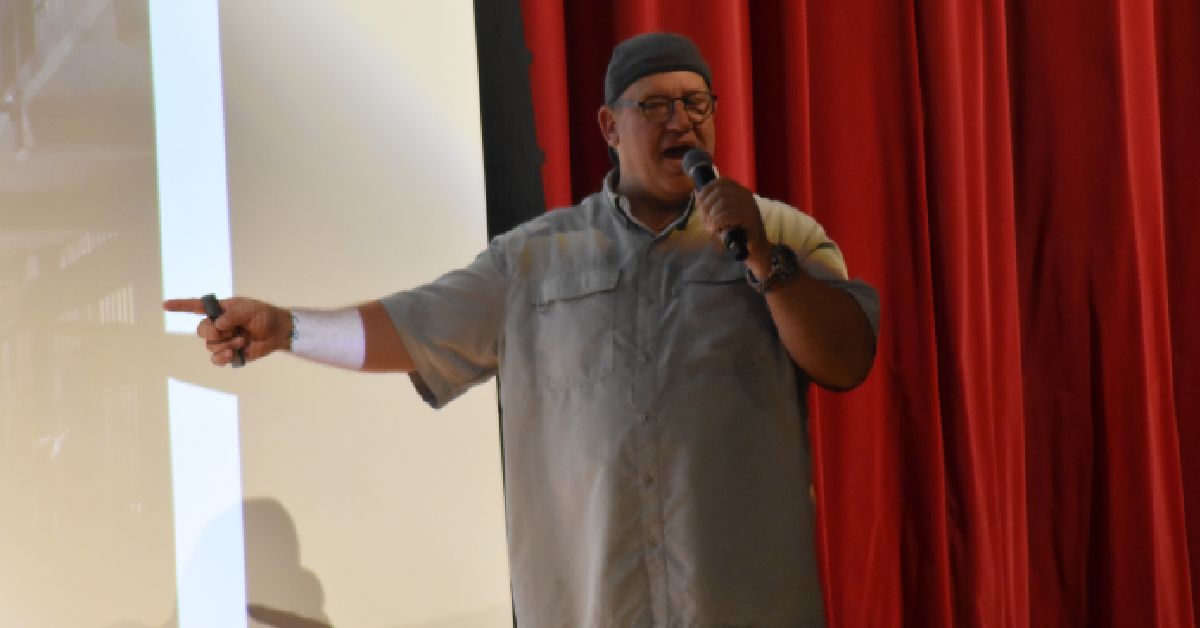 On Monday, October 10th, Michael DeLeon from Steered Straight came to both Hanover Central High School and Hanover Central Middle School to talk to our students. He later talked to our staff and parents. The mission of Steered Straight is “To steer youth straight toward making sound, rational decisions through a learning experience that provides a message of reality to help them make positive, informed choices.” DeLeon is the founder of Steered Straight Inc., a non-profit organization created in 2007 when he was released from prison. His goal with youth is to educate them on the extreme dangers of drugs, gang involvement, and other criminal activity.

DeLeon shared his experience of his childhood and his experiences in doing drugs that eventually landed him in prison for 12 years. Since his release, he has received 3 Associates degrees, a Baccalaureate degree in Business Management, with a minor in Criminal Justice and a Certified Alcohol Drug Counselor certification. For the past 12 years, DeLeon travels the country to speak and make a difference in the lives of young people by sharing his story.

Throughout his talk he asked all of the students, by show of hands, if they knew someone using vapes, marijuana, pills, alcohol, and other drugs. This allowed the students to see how alarmingly common it is for students to be involved in drugs and alcohol. Students were shocked to hear some of the statistics that DeLeon shared with them.

DeLeon talked about the statistics of vaping. The usage of e-cigarettes and vapes in middle schools is about 15% and high schools is about 30%, according to the CDC. The marketing of these products is aimed at adolescents and is unregulated by the FDA. He also talked about Fentanyl awareness and the dangers in prescription drug misuse, abuse and overdose. The rate of fatal teen overdoses doubled in 2020 and has now tripled over the past two years, according to the CDC. Marijuana was also discussed and with the legalization of it, youth usage has increased. Kids are hooked early and the media message is that it is a harmless plant that is no more dangerous than alcohol.

One student said, "I think it's good to hear from speakers like this one, because we are able to relate to them more, which makes us actually want to engage in the assembly. He made me feel like he was more of a friend, wanting the best for us as opposed to a school speaker who just lectures on." Another student said, “Prior to the presentation, I had no idea just how harmful habits such as smoking, vaping, drinking, etc. could really be. The presenter used himself and other students to become more relatable to the crowd. Also, he introduced the fact of how young these bad habits could develop, which was a shock and encouraged me to never do this. This assembly was a very effective reminder to not start making these wrong choices early on in my lifetime.”

Staff was also asked about their opinions on this assembly. 97% of our staff recommended that we continue to host speakers like this in the future. Staff expressed that they think the assembly gave insight on the dangers of drugs and encouraged them to talk to adults more. Some staff also expressed the importance of talking about this more in a non-confrontational way, like this, to give the overall message to the students.

Dean of Students at HCMS, Michael Engle said, “Young people are vulnerable and impressionable, and many lack the strategies and confidence to combat social pressure. The message was clear: The decisions you make today will have long lasting effects on your life. Choose wisely.” Dean of Students at HCHS, Brian Parker said, “I believe the Steered Straight program's sole intent is to show firsthand the effects that early drug use can have and its long-term effects. Michael DeLeon's message is a direct testament and he is able to drive home the message as a former addict himself.”

Director of School Safety and Security at Hanover Community Schools, Michael O’Donnell, expressed his thoughts, “Mr. DeLeon did a great job with our students. His real life experiences and all the interviews of parents of victims will hopefully hit home for our students and will prevent them from starting to use or continuing to use vaping devices. Peer pressure is a big factor and he addressed those issues also.” The Steered Straight assembly was eye-opening to our students and a majority of them would like to see Mr. DeLeon and speakers like him in the future.