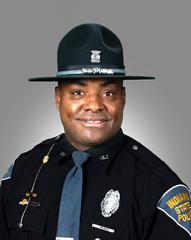 On Sunday, August 17 at around 9 a.m. eastern time, Trooper Lawrence McFarrin was dispatched to I-94 near the 26 mile marker to check on two people walking along the interstate with a dog.

Upon arrival, he started talking to the two who stated that they were attempting to get to either Chicago or Indianapolis but had no money. They had attempted to solicit money to get a ride and had failed and ended up in Chesterton. They felt that they had overstayed their welcome in Chesterton and tried to find a way for a ride to either location but they could not get any assistance due to them having the dog.

McFarrin attempted along with Region One Dispatcher Mary Stevens to find a ride for them with no avail. Finally, after about one and a half hours, contact was made with Quick Cab driver Michael Settles. McFarrin informed Settles of the situation and that McFarrin would donate $25 of his own money to help get them off the interstate and to their destination. Even though that was not near enough to pay the fair and get them all something to eat, Settles graciously agreed to transport the three to their destination anyway. McFarrin transported the three to 25th and Broadway in Gary where he met Settles who took the three off the trooper’s hands.

“It was a nice jester for Quick Cab to donate their time and driver to assist with this deed. After making contact with buses, trains and local shelters, none would take them with the dog,” stated McFarrin. “It helped alleviate a problem that kept getting bigger as time moved on. Thanks again to Quick Cab and their ability to step up to the plate when it was needed!”