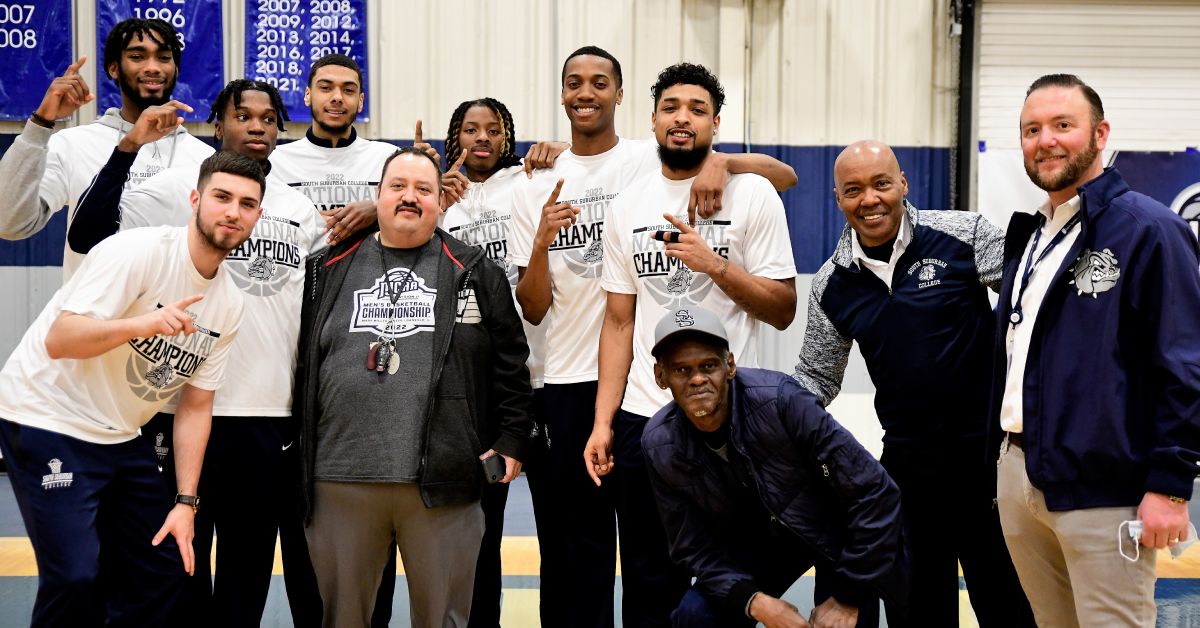 Smiles donned the faces of student-athletes, coaches, administrators, families and fans as the South Suburban College (SSC) men’s basketball team gathered in the SSC Fieldhouse for an historic moment: the unveiling of their championship banner. The SSC men’s basketball team won the National Junior College Athletic Association Division II (NJCAA DII) National Tournament on Saturday, March 19, 2022. This is the first National Championship achieved in the history of SSC Athletics. The Bulldogs entered the tournament as the number one seed, and concluded their season with an undefeated (33-0) record. They are the first team in NJCAA DII history to accomplish this feat.

Prior to the banner unveiling, SSC Athletic Director Steve Ruzich beamed with excitement. He has been with the college for 36 years and said, “Every Bulldogs athletics team has been to a national tournament, but to win a National Championship is the ultimate accomplishment. I couldn’t be prouder of Head Coach John Pigatti, the players and staff of the men’s basketball team.”

There were many aspects of this team that stood out to Ruzich beyond their skill. He added, “The one thing you can’t teach is chemistry and these guys really believed they could do it.”

Freshman Point Guard Damarco Minor agreed. It was the team’s connection that led them to victory, a bond that he feels will last for a lifetime. “We have been through a lot. None of us knew each other before the season. Each of us came in with our own agenda,” Minor remarked. “Everyone had to put their egos aside to win the game and that is what I am most proud about.”

The resounding success of the season still hasn’t set in for the freshman of Harvey, IL. While Minor thought the team could win the national tournament, given the amount of hard work invested all season, he credits their growth by facing adversity in the preseason. He said, “We had to lose in the preseason to gel."

Not only does Minor credit his teammates, he expresses appreciation for Coach Pigatti stating, “He pushes me harder than anyone else…He gets you to that pro mindset. He is not going to let you stay constant, the same. He is going to make you a better student-athlete."

Having won 12 Regional Championships, Pigatti attributes this years’ national victory to the players and

their relationship with one another. “We took a team of 13 players; 11 transfers and two freshmen, none of whom had played together. It took a while to get that bond, but once they got that bond, they were unbreakable. Our guys gelled at just the right time. October 26, 2021, we went two games below 500 in our preseason. That was the last time this team lost. My motto is always losing is not an option," Pigatti remarked.

While he is known for breaking a few clipboards during the season, Pigatti believes solid communication is key. He said, “You have to have constant communication and be honest. They have to understand where you are coming from and know that you are sincere and looking out for their best interest.”

SSC President Dr. Lynette D. Stokes is grateful for the support of the community, who helped get the Bulldogs to this monumental moment. “While it takes skill and tenacity to be successful, having a solid support system for these student-athletes is just as important,” she stated. “I am so proud of this team. They have worked incredibly hard and are so dedicated. They accepted the challenge and pushed forward all season to achieve success.”

Stokes excitedly informed the team that congratulatory phone calls and text messages had been pouring in from the governor, senators, alumni and fans. She beams with pride when speaking about SSC adding, “We are the true essence of a community college. We offer various services for students to guide them on their path to success.”

SSC Board Chairman Terry R. Wells was just as supportive of the Bulldogs and their high achievement. He concluded, “Last week when we had the motorcade arrive back on campus, it was great to see the softball team stop their practice or game to run across and greet the men’s basketball team. It was such wonderful school spirit.”

It was with that same high-spirited energy that attendees cheered and counted down to the unveiling of the long-awaited National Championship banner. Above the well-earned regional banners, the national banner in all its glory now hangs in the SSC Fieldhouse representing success, lifetime bonds, and community support.

For more information about South Suburban College, visit their website at: https://www.ssc.edu/. 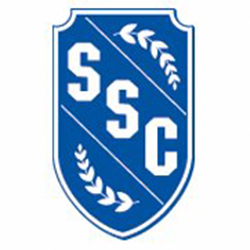