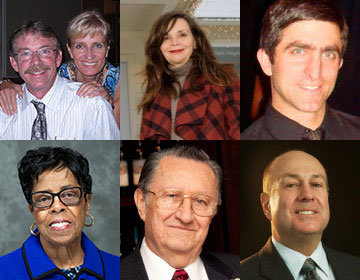 The South Shore Convention and Visitors Authority has released the names of the newest group of the 30 Faces of Tourism.

Russ and Nancy Adams owned and operated Strongbow Inn Restaurant for 18 years, but both had been involved with the development of the business for many years prior. After the Adams purchased the restaurant, they completed an 11,000 sq. ft. addition to the banquet room and an addition of 6800 sq. ft. to accommodate the growing bakery was completed in 2002. The Adams were at the restaurant everyday overseeing the daily operations.

After spending 15 years traveling for work and spending time in Europe, Nada Karas moved to Chesterton with her husband, Michael, and began a new career. Having always had a passion for culinary arts and being true foodies, The Karas’ opened Lucrezia in Chesterton in 1998. Understanding that tourism is key to their business, the Karas’ have always taken pride in the preparation of each entrée and the use of fresh, quality ingredients.

Peter Kaiafas started working at the family business, The Patio Restaurant, when he was 15 years old, performing duties as a bus boy, waiter, bartender and host. After graduating from Indiana University Bloomington he took cooking classes at Kendall College in Evanston Illinois while working as a manager of The Patio Restaurant. Kaiafas helped open Avalon Manor Banquet Center in 2000 and has served thousands of satisfied guests in the last 13 years.

State Senator Earline Rogers is widely recognized as one of the Indiana General Assembly's most effective leaders. Among her many legislative accomplishments, Rogers filed the first bill to create casino gaming in Indiana and co-authored riverboat gaming legislation, which has become a billion dollar industry for Indiana. During the 1989 legislative session, Rogers was able to deliver 46 out of 50 votes to pass the state’s first land-based casino proposal, and in 1993, she secured five of the 11 initial riverboat licenses for locations along Lake Michigan.

John Loxas is the president of Gaslight Enterprises and Olympia Enterprises, owning Ramada Inn, Olympia Lanes, Dynasty Banquets and Johnel’s Restaurant, which are all located in Hammond. Loxas opened Olympia Lanes in 1985, and began the process of revitalizing the entire area around the business, providing the City of Hammond and visitors of the South Shore dining options, a conference space and a venue for entertainment.

Tom Collins, Sr. is the chief executive officer of Luke Oil, a family owned and operated business that was founded in 1967 by his father-in-law, Ralph Luke, in Hobart, Indiana. In 2005, the company bought County Line Orchard, in Hobart, where they have held numerous fundraisers to benefit charities including the Food Bank of Northwest Indiana and various veterans’ organizations.