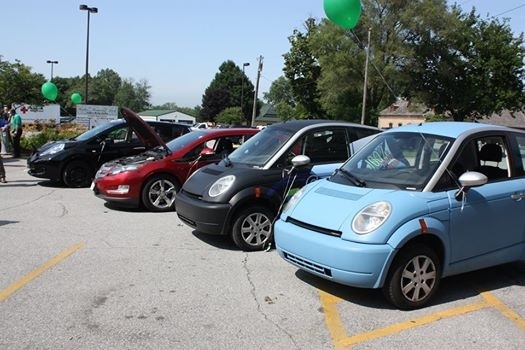 South Shore Clean Cities today announced it will work with the American Lung Association of the Upper Midwest and seven other Clean Cities coalitions on a three-year project to promote electric vehicles throughout the Midwest.

The Midwest EVOLVE (Electric Vehicle Opportunities: Learning, eVents, Experience) project will demonstrate the performance and environmental benefits of plug-in electric vehicles through showcases, ride and drives, and events. South Shore Clean Cities is a partner on the seven-state project, which will include educational events in Ohio, Michigan, Indiana, Illinois, Wisconsin, Minnesota, and North Dakota.

“Electric vehicles are becoming increasingly popular, due to their better batteries, decrease in cost, an increase in choice, and the rollout of charging infrastructure,” said Lew Bartfield, president and CEO of the American Lung Association of the Upper Midwest, today at a news conference at the Chicago Auto Show. “These advanced, modern vehicles reduce emissions that contribute to climate change and smog, improving air quality and public health.”

The Lung Association and the eight Clean Cities coalitions will host more than 200 large and small events in three years, held at brand-neutral settings that will give Midwestern drivers an opportunity to get behind the wheel of electric vehicles. The first events will be held in the spring of 2017.

“The Midwest is often overlooked as a market for electric vehicles,” Bartfield said. “The goal of Midwest EVOLVE is to build awareness and visibility for the advantages of electric vehicles, and to help the Midwest rediscover the automobile again, this time with a plug.”

“There’s no better way to learn about the performance and environmental advantages of EVs than personal experience,” said Carl Lisek, executive director of South Shore Clean Cities. “Through participating in major events throughout Northern Indiana, hosting ride and drives, and conducting seminars, we hope to make a major impact on improving air quality and saving fuel.”

The Midwest EVOLVE project initially launches with three automotive partners, Ford Motor Company, General Motors and Nissan, as well as more than 60 other partners throughout the Midwest, including Argonne National Laboratory, utilities, state agencies, municipalities, dealerships and dealer associations. The partners support the project through donations, vehicles for test drives, and in-kind support.

About Midwest EVOLVE
The Midwest Electric Vehicle Opportunities: Learning, eVents, Experience (Midwest EVOLVE) project – is a partnership between the American Lung Association of the Upper Midwest and eight Midwestern Clean Cities coalitions in seven states. The project’s focus is to educate consumers, as well as public and private fleets, about the performance and environmental advantages of electric vehicles. The project is based upon work supported by the U.S. Department of Energy, Office of Energy Efficiency and Renewable Energy (EERE), under Award Number DE-EE0007743. The American Lung Association of the Upper Midwest and Twin Cities Clean Cities oversee the program. To learn more, visit: www.MidwestEVOLVE.org.

About South Shore Clean Cities
South Shore Clean Cities (SSCC) is a nonprofit coalition focused on promoting cleaner energy for transportation in Northern Indiana. SSCC is one of more than 90 coalitions across the country that are affiliated with the U.S. Department of Energy’s Clean Cities program, which brings together stakeholders to increase the use of alternative fuel and advanced-vehicle technologies, reduce idling, and improve fuel economy and air quality. SSCC concentrates its efforts on educating businesses and municipalities in the 18-county Northern Indiana area, including Lake, Porter, LaPorte, St. Joseph, Elkhart, LaGrange, Steuben, Newton, Jasper, Starke, Marshall, Kosciusko, Noble, DeKalb, Pulaski, Fulton, Whitley, and Benton counties. To learn more, visit www.southshorecleancities.org.