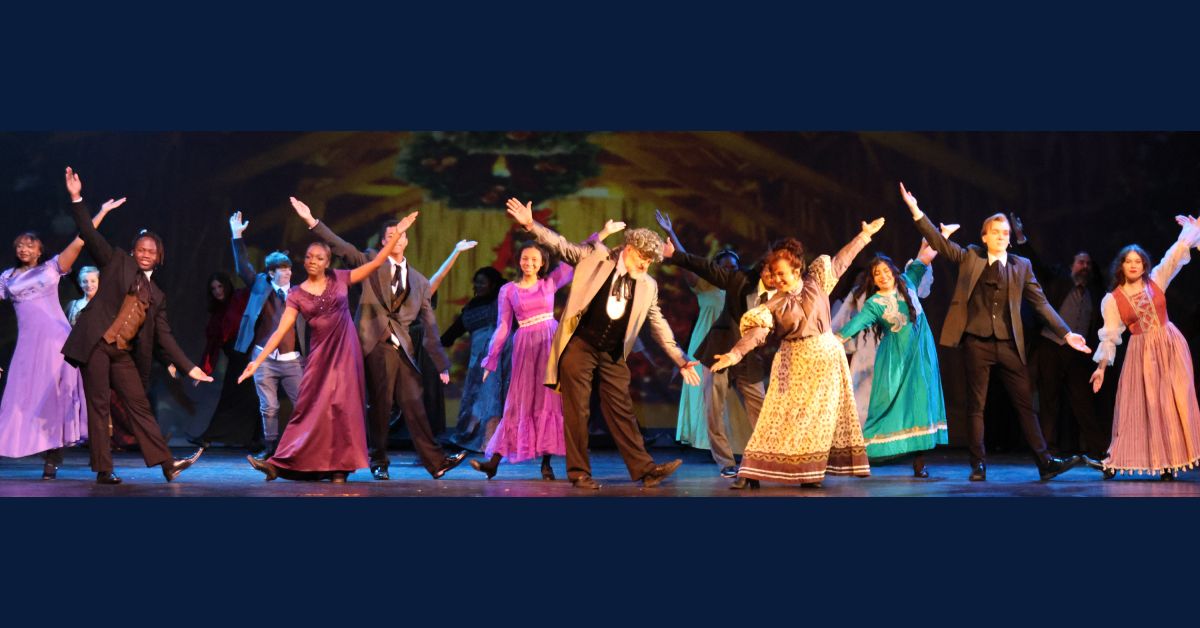 During the holidays, there’s nothing better than finding a new way to get into the holiday spirit. Luckily for the Northwest Indiana community, Ross Music Theatre Productions has them covered. On Thursday, December 1, Ross Music Theatre held its annual production of "Scrooge" for the school, and it was truly the perfect way to kick off the Christmas season.

Mike and Melinda Reinhart co-directed the play. Mike Reinhart, who also played the part of "Scrooge," explained that Ross Music Theatre has been performing the play for over 20 years.

“This was my dad’s favorite play--this was one of his favorite Christmas stories and his favorite version of it. He started it here years ago and when he passed away we just continued to do it,” said Mike Reinhart.

There were so many things to love about the show, but the music was definitely a highlight. A choir sang Christmas carols between the different scenes and really brought the performance to life.

“The music is from the 1970s movies, and I think the music from this is some of the best out of any musical version of 'Scrooge.' It’s an abbreviated version, so all the scenes are shortened a bit, but all the songs are there. It’s only an hour and a half show, so it’s a great way to introduce someone to a musical, especially younger kids and people who think they wouldn’t like it,” said Mike Reinhart.

The best part of the show is how much it brings people together and facilitates a love for theater. Some kids perform in the show each and every year. Cassidy Koontz, who plays the part of Isabel, has been doing community theater since she was seven. She was beyond excited to play in "Scrooge" again.

“It’s something that my family always got to do together when we were younger. I have two older siblings who live in different states now, but we all used to do it every year. It was just part of our family tradition, and so being a part of this is just tradition for me now,” said Koontz.

However, even though the theater presents "Scrooge" each year, there’s always something new and unique to take away from every show.

“Every year there are so many new kids, and it’s great because they just have so much enthusiasm. When they come in and they’re learning the choreography and getting on stage for the first time it’s like okay, this is why we do it--because it’s fun and it’s something that everyone can enjoy,” said Koontz.

Overall, everybody was incredibly grateful to take part in such a wonderful production and even more grateful to be part of such a supportive team that fuels one another’s passions.

“I’m so grateful to Mike and Melinda--I don’t think I would have had as many opportunities as I’ve had without them or found a love of live theater if it weren’t for them. I owe them so much,” said Koontz.

If you’re looking for a wonderful way to get into the holiday spirit, this show is the perfect opportunity for you. Showings will be held on Friday, December 2 and Saturday, December 3 at 7:30 p.m. as well as Sunday, December 4 at 3 p.m. This is one Christmas production you’re not going to want to miss.

“It’s more than just a show, it’s an event. Our concession stand has a full menu--you can get things like turkey soup and turkey meals. We have the lobby all decorated and set up with tables so people can eat before the show and during intermission. You can really make a whole evening out of it. It’s a really fun evening, and if you’re looking to get into the Christmas spirit this is the place to do that,” said Mike Reinhart.

To learn more about Ross Theatre Productions and its moving production of "Scrooge," visit the link here.