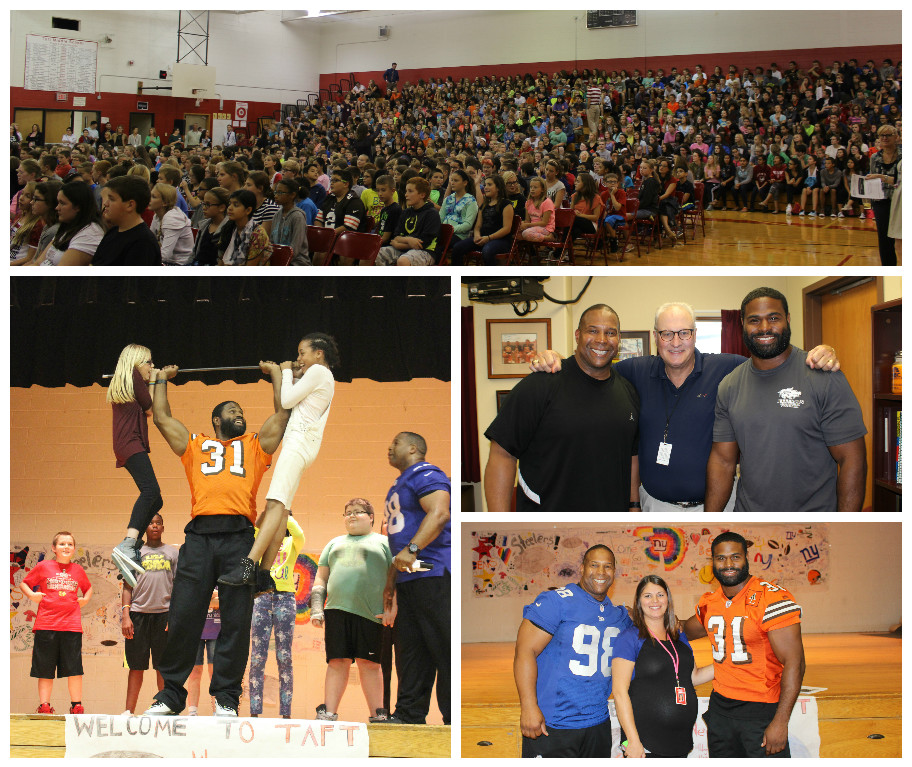 Our CASS (Creating a Safe School) program, chaired by Mrs. Danielle Wireman, sponsored an Anti-Bully assembly for the whole school on Wednesday September 16th. This was the first school-wide convocation that Taft had seen for many years. Taft welcomed Keith Davis and William Green of The Winners Organization (http://www.keithdavis.org). They are former NFL players that travel across the country to spread positive messages to teens. Approximately 1000 students and most of the school staff piled into the school gymnasium at 1:30pm to check out this presentation.

Keith Davis standing at 6 feet 1 inches, weighing 265 lbs. was a linebacker for the New York Giants. After a devastating career-ending knee injury, Davis decided to found the organization called “Winners, Inc.”, to help young, disadvantaged kids. He has presented in over 3,000 schools in 25 countries. By sharing his own personal struggles and successes, he inspires young kids to overcome their obstacles by trying their best and staying positive. He currently lives in Dallas with his wife, Sara and their two sons.

William Green is a former running back for the Cleveland Browns. Following his professional football career, he turned to motivational speaking. His speeches are typically about forgiveness and overcoming struggles as his personal life is truly inspiring. As a child, he watched both of his parents die of AIDS, his father when Green was 12 and his mother about a year later. He is the father of eight children. He lives with his children and wife, Asia on a four-acre property in Berlin, New Jersey.

These men had the attention of roughly 2000 teenage ears and eyes. The presentation was phenomenal. Their speech brought attention to; accountability, personal responsibility, choices and voices, character, respect, bullying, acceptance, selflessness, academic success, hard work ethic, and self-esteem. They made it an important point to make kids understand that, “You were not born a winner or a loser. You were born a chooser.” The students at Taft really enjoyed seeing William Green do push-ups with kids, Mr. Helfen, a sixth grade teacher, and Mr. Hazen, Principal, on his back!