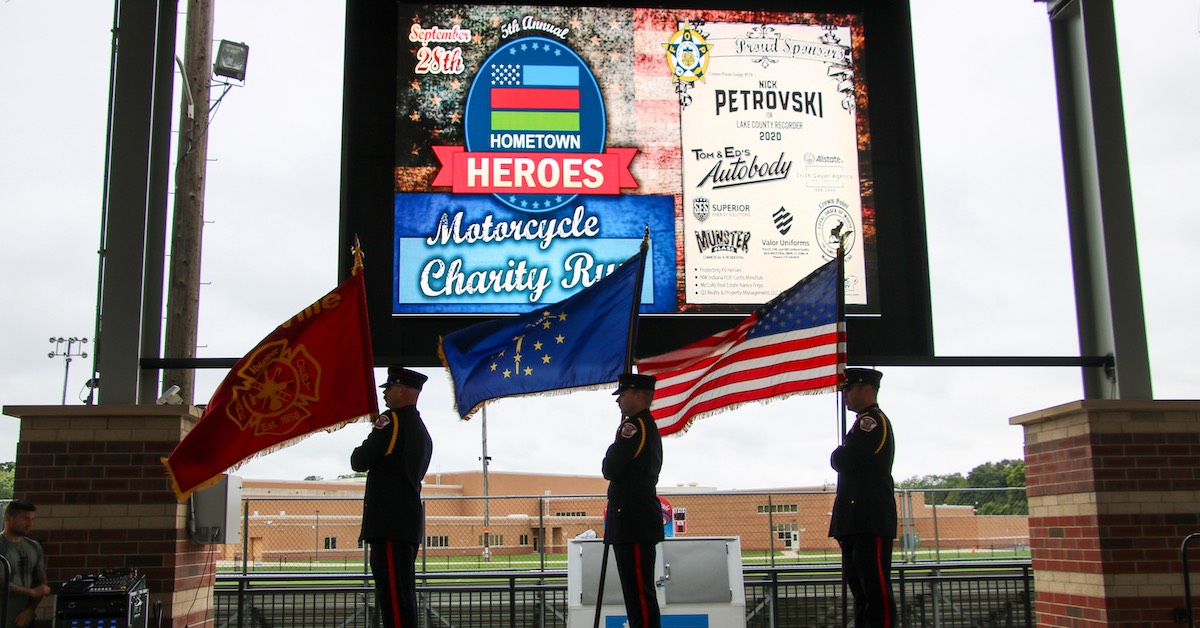 Though several committed riders ended up having to stay home for reasons relating to yesterday's storms, an impressive group of local motorcycle enthusiasts left Bulldog Park around 12:30 pm and completed a 50-mile loop of the area, to honor and raise money for local military, veteran, and emergency service members.

"I came out to support the veterans and all the people in uniform," explained participant Robert Dickenson. "Even with the weather like it has been, it was a great ride - very nice."

Dickenson said he really appreciated the run’s organization, the police escort, and the consideration of the other drivers they passed on the road.

One of the officer escorts was the event organizer: Crown Point Police Officer Robert Ballas, one of the city’s two certified motor officers and an 11-year veteran of the force.

"A lot of the beneficiaries are non-profit organizations that don't have the power, the influence, or sometimes just the help to get a fundraiser like this off the ground," he said.

The event focuses primarily on organizations in Lake County, Ballas explained, as part of its shared mission with the City of Crown Point to build a better community from within.

"I'm a big fan of what they do," said David Uran, Mayor of the City of Crown Point. "The city is a big supporter of our military personnel and first responders in our community. This event brings a lot of awareness to the needs of those who serve in uniform.”

When Hometown Heroes Charity Bike Run co-Founder Pete Dragojevic’s sister, Becky, served several tours of military service, he saw first-hand the kind of support they need. After she returned, Becky and her brother started the charity bike run to help elevate and bring attention to the work being done in the community on behalf of those in uniform.

"We wanted to find a way to contribute our love and support back to first responders and the military service members," Dragojevic said.

He expressed deep gratitude for the growth the event has seen over the last five years as more and more local emergency and military agencies have come on board.

“It has been really touching,” he said. "To see what we have here today, the show of love and passion for the first responders makes me very content."

After the ride, participants gathered in the new Bulldog Park Pavilion for an emotional awards ceremony. Each organizer was presented with a plaque attached to an American Flag that had been flown during military operations overseas, to thank them for their hard work and dedication over the last five years.

Two K-9 officers with the Gary Police Department, Leo and Falco, were invited onstage to demonstrate their crime-fighting skills. Despite their fearless demeanor in the line of duty, they sat patiently for pets and belly-rubs from curious children when they were done.

Ward currently serves as Police Commissioner for the City of Merrillville, though during the war he was on mines and demolition duty.

"It is an honor to be at events like this,” Lopez said. “It demonstrates the greatness of our community and our region where people come together from governmental organizations to non-profits and the general public, to give back. That is a good indication of the future of Northwest Indiana."
For more information about emergency and military services for the City of Crown Point, visit https://www.crownpoint.in.gov/.