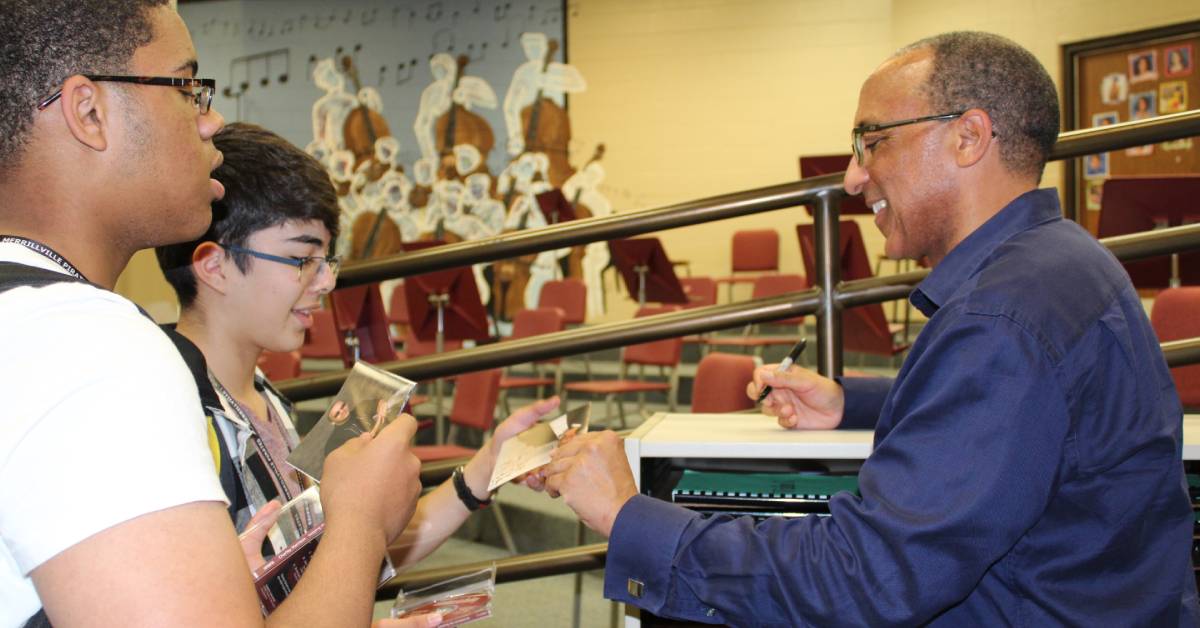 Merrillville, Ind. -- Charley Harrison, UCLA jazz professor and former associate director of the Chicago Jazz Orchestra, one of the top-performing groups in the world, spent the day with Merrillville High School Orchestra Teacher Diane Rosenthal and her students on Monday.

“It was really an invigorating experience to work with Merrillville High School Orchestra students,” said Harrison. “The enthusiasm that all of these kids have for playing music and even learning about jazz is really heartwarming.”

Rosenthal commissioned a piece from Harrison specifically for the after-school jazz orchestra club for its 2020 Indiana State School Music Association (ISSMA) performances.  Harrison topped off his visit by helping the club work through the “Pirate Suite,” music he developed in three movements: “Undeniable Strings,” in the style of swing; “Strolling the Street Fair,” a ballad; and “Even Pirates Get the Blues,” a blues number.

ISSMA requires three pieces that reflect three styles of jazz during competitions. Merrillville High School is the home of the Pirates.

According to Rosenthal, “It's pretty special to have a piece written for you and even more unusual to get to work with the composer of the music you are playing. Bach and Beethoven aren't likely to show up to help us out!”

While the purpose of his visit was to work with the jazz orchestra club, Harrison met with students and classes throughout the day, answered questions and helped them learn more about jazz. Harrison even gave out and autographed his CD “Keeping My Composure.”

Rosenthal and Harrison both went to Evanston Township High School, and it was a high school reunion where they reconnected.

UCLA Herb Alpert School of Music website states, "Charley Harrison is one of a rare breed of composers that is as equally skilled with a baton in front of an orchestra, as he is behind a computer in a studio full of synthesizers. Known for his stirring orchestrations, as well as hard-driving swing, Harrison’s music has been enjoyed on film and television, symphony halls and nightclubs, in the studio and on the road, both domestically and abroad.”

This is the third year for the jazz orchestra club that Rosenthal started. Rosenthal is a classically trained violinist.