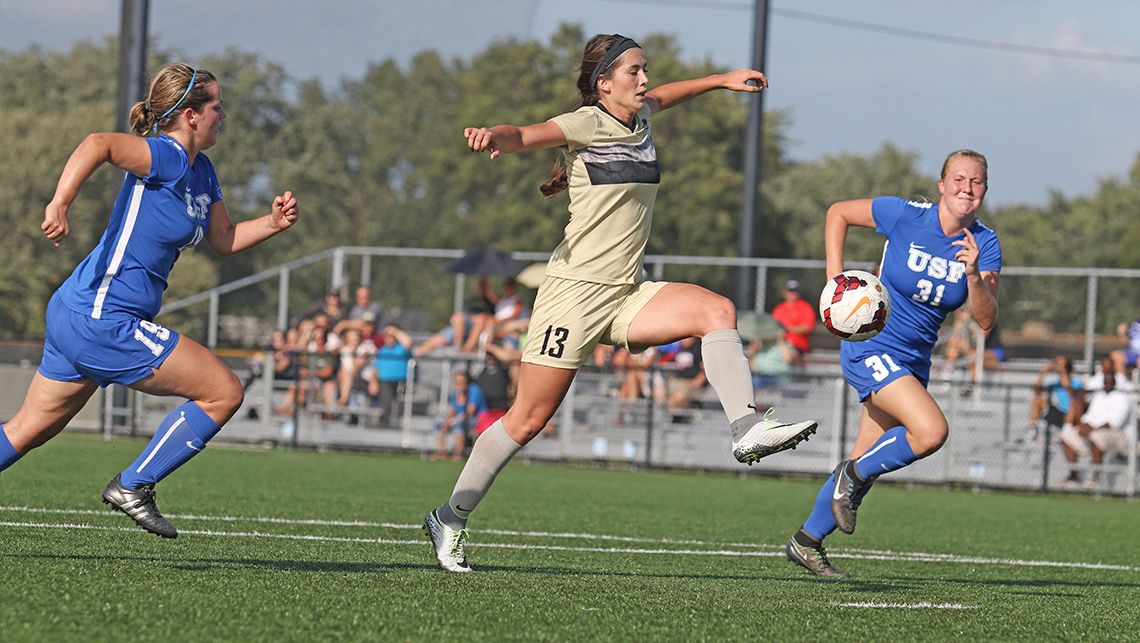 The Pride (2-3) took an early 1-0 lead in the 24th minute, thanks to a goal from sophomore Shelby Ross (Nashville, Ind./Columbus North), who ripped a shot from over 20 yards away to beat the keeper high, giving PNW the 1-0 advantage.

Both teams would remain scoreless for the rest of the half, with the Black and Gold taking a 1-0 lead heading in to the break.

Despite a gritty effort by the PNW back line to keep the Cougars offense at bay, St. Francis would find the back of the net late in the second half, after Summer Holtkamp headed in the game-tying goal on a cross from Mackenzi Starcevich in the 85th.

The Cougars would end up scoring the game-winning goal in the 89th minute, when Starcevich connected on a header after a St. Francis throw in, which clinched the match for the Cougars.

Purdue Northwest will be back in action next Wednesday, Sept. 14, when the Pride kicks off conference play with a home match against Olivet Nazarene at 4 p.m. at Dowling Park's Pepsi Field.

The Purdue University Northwest volleyball team will look to start the Chicagoland Collegiate Athletic Conference on a high note as the Pride host Olivet Nazarene Thursday night in Westville.

For a campus map, http://www.pnw.edu/facilities/wp-content/uploads/sites/20/2015-PNC-Campus-Map-Model3.pdf

DONATE FOR A CAUSE
PNW is teaming up with Olivet Nazarene to host a supply drive Thursday and throughout the week to support an upcoming opponent, Indiana Kokomo. The IU-Kokomo volleyball team, along with the entire Kokomo community, was recently devastated with three tornadoes in late August and many students, including members of the IU-Kokomo volleyball team, have lost their homes and belongings completely.

The Pride will accept the following items at Thursday's game and throughout the week in order to take with them to their IU-Kokomo match held Sept. 14 in Kokomo. Items can be dropped after the game at either the Hammond Fitness and Recreation Center or the James B. Dworkin Center in Westville.

SCOUTING THE PRIDE
PNW is led by Martin, who has 67 kills, 3.05 K/Set and freshman Olivia Simpson, who adds 2.20 kills per set. On defense, the Pride are led by Kayla Elsea (Palmyra, Ind./Crawford County), who has 20 total blocks and Casey Neulieb with 3.64 digs per set. Freshman setter Brooke Ahrens (5.77 assists per set) and sophomore Abbe Mullen (3.55 assists per set) direct the Pride offense.

SERIES HISTORY
Thursday will mark the first meeting between ONU and the newly formed Purdue Northwest program, which represents a merged squad of the Purdue North Central and Purdue Calumet programs.

LIVE LOOK
Live video and stats will be available for Thursday's match on the Pride Sports Network, in coordination with Stretch Internet. PNW will once again offer HD-quality video with multiple camera angles this season. All of PNW's home volleyball games will be streamed on PSN, found here: https://portal.stretchinternet.com/pnw/

TICKET INFORMATION
Ticket prices for all PNW home volleyball matches are $6 for adults (18 and up) and $4 for children (ages 4-17). Children three and under are free and all PNW students with valid ID are also free. Season ticket packages are available beginning at $30 for two adult passes to all 10 home dates and can be purchased online by credit card HERE.