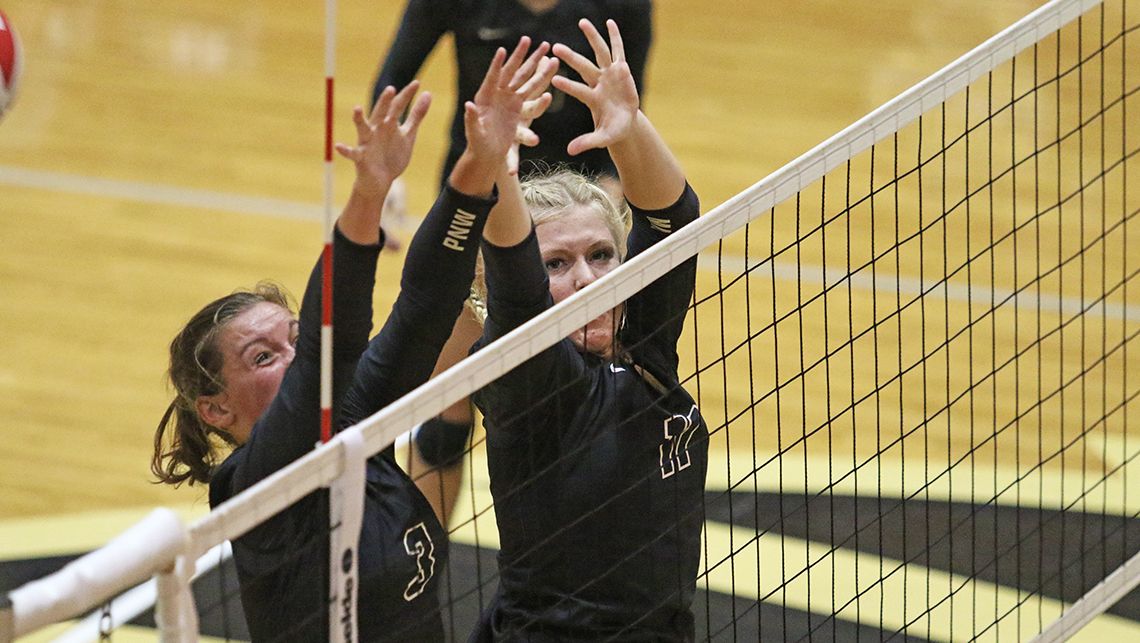 The first set played tight throughout, as both teams stood knotted at 24-all late. But two straight IUN (5-6) errors gave Game 1 to host PNW, as Simpson led with three kills.

The second set was much the same, as the RedHawks tied it up at 25-all PNW error. But two straight serves by Kylie Tincher (Sellersburg, Ind./Rock Creek Academy) and two kills by Martin sealed the second-straight extra-time victory. IUN jumped out to an early 7-3 lead in the final game, but the Pride stormed back behind a 7-3 run of their own — led by two Ahrens aces and two Simpson kills, to tie it at 10.

PNW gained control from there, rattling off a nine-point run to take a commanding 20-11 lead.

Freshman Olivia Simpson (Bolingbrook, Ill./Bolingbrook) claimed the Attacker of the Week a .306 attack percentage to go along with 13 service aces and five block assists in the University of Northwestern Ohio Silver Spike Tournament over the weekend. Simpson averaged 2.12 kills per set and had her best game over Huntington, when she tallied 16 kills on 34 attacks.

Brooke Ahrens (Covington, Ind./Covington) earned Setter of the Week accolades after helping the Black and Gold earn a pair of wins against Cumberland University and Huntington University. Ahrens notched the programs first triple-double with 12 kills, 24 assists and 16 digs in a 3-1 victory over the Foresters. She averaged 5.25 assists, 2.94 digs, 1.94 kills per set and six service aces over the four game span.

Both Simpson and Ahrens were named to the UNOH All-Tournament team.

Sophomore Casey Neulieb (Michigan City, Ind./Michigan City) would notch Defender of the Week honors, thanks to her stellar play on the court over the past four matches. Neulieb recorded 59 total digs and averaged 3.69 digs per set, while adding six service aces. She also had a near perfect serve reception at .975 percent, which included just three errors on 118 attempts.

This marks the first Player of the Week honors under head coach Julie Wiejak. The Pride return home tonight for a 7 p.m. matchup against Indiana Northwest at Hammond's Fitness & Recreation Center.

For the full conference release: http://www.ccacsports.com/article/2787.php

David (Spring Valley Calif./Bonita Vista) allowed just one goal in over 200 minutes of action last week, including a 1-0 shutout victory against Bethel College in double overtime on Sept. 3.

The junior keeper recorded a 0.43 goals against average for the week while facing 24 shots, totaling seven saves (.875 save percentage), including five in the win at Bethel.

This marks David’s fourth CCAC Player of the Week honor, after earning one last season and a pair of POW accolades during his freshman season.

For the CCAC full release, check out http://www.ccacsports.com/article/2788.php