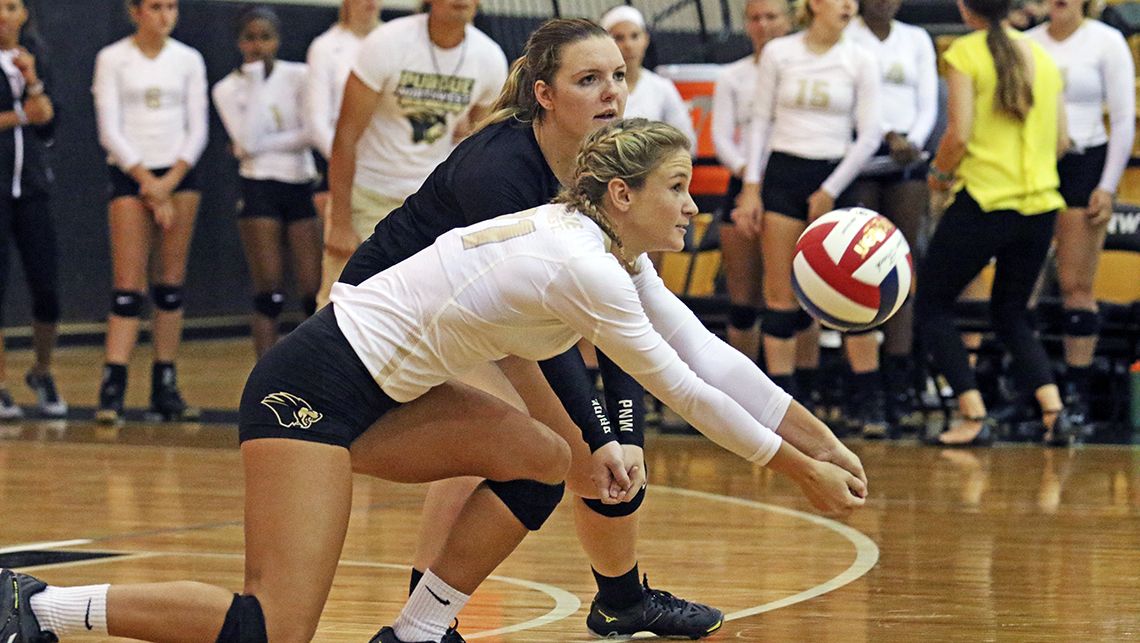 PNW Volleyball Drops 5-Set Battle to IU Kokomo
After trailing two sets to none to start off the match, the Purdue Northwest volleyball team rallied back to take the next two sets, before dropping the final game in a 5-set thriller Wednesday night at the Cougar Gymnasium.

Freshman Brooke Ahrens (Covington, Ind./Covington) recorded her third triple-double of the season, recording a team-high 27 assists, 18 digs and 10 kills to go with a .360 attack percentage.

Junior Gabrielle Martin (DeMotte, Ind./Kankakee Valley) would lead the team with 11 kills and 17 digs while Casey Neulieb (Michigan City, Ind./Michigan City) notched a team-high 20 digs to round out the Pride leaders.

After dropping the first two sets to the Cougars, the Black and Gold continued to fight and pick up the third set victory.

After taking a commanding 9-2 advantage to start off Set 3, the Pride would add on to their lead after a kill from Martin put the Black and Gold up 14-6.

IU Kokomo would eventually even the score at 23-23 before taking a 24-23 lead thanks to a kill from McKenna Lundy.

The Pride battled back to take the third set, 27-25, after a Cami Webster (DeMotte, Ind./Kankakee Valley) followed by an attack error from the Cougars gave the Pride the Set 3 win.

Purdue Northwest would carry that momentum in to the fourth set, starting off with a 7-2 lead.

The Black and Gold would keep that lead and never look back, sending the match to Set 5 after coming away with the 25-20 win in Set 4.

IU Kokomo would take an early 6-3 lead to start off the final set, but back-to-back kills from Webster put the Black and Gold within one, 6-5.

The Cougars would extend their lead and keep it for the remainder of the set, as they would take the final set and come away with the victory over the Pride.

PNW will return to action next Tuesday, Sept. 20, when they travel to Joliet, Ill. for a Chicagoland Collegiate Athletic Conference match with St. Francis (Ill.) at 7:00 p.m.

PNW (2-4, 0-1 Chicagoland Collegiate Athletic Conference) held the Tigers (3-0-2, 1-0) to just one first-half goal — in the first minute of the game — when ONU’s Sarah Buffum corralled a ball from just inside 15 yards to connect for the visitors’ early lead.

But Olivet Nazarene’s offense continued to pound away, as Hannah Ondrey found the back of the net in the 52’ to make it 2-0, Tigers. ONU wouldn’t score again until the 81’ and 87’, as Ondrey scored on a rebound off a Lucie Ashmore (Greystones, Ireland) save and Brianna Hollowell added the last on a quick cross into the box from teammate Jessica Schmidt.

Ashmore would record a game-high seven saves — and defender Stephanie Sotiropoulous (Manteno, Ill./Manteno) added another stop — against Olivet Nazarene’s 30 total shots, 12 of them on goal.