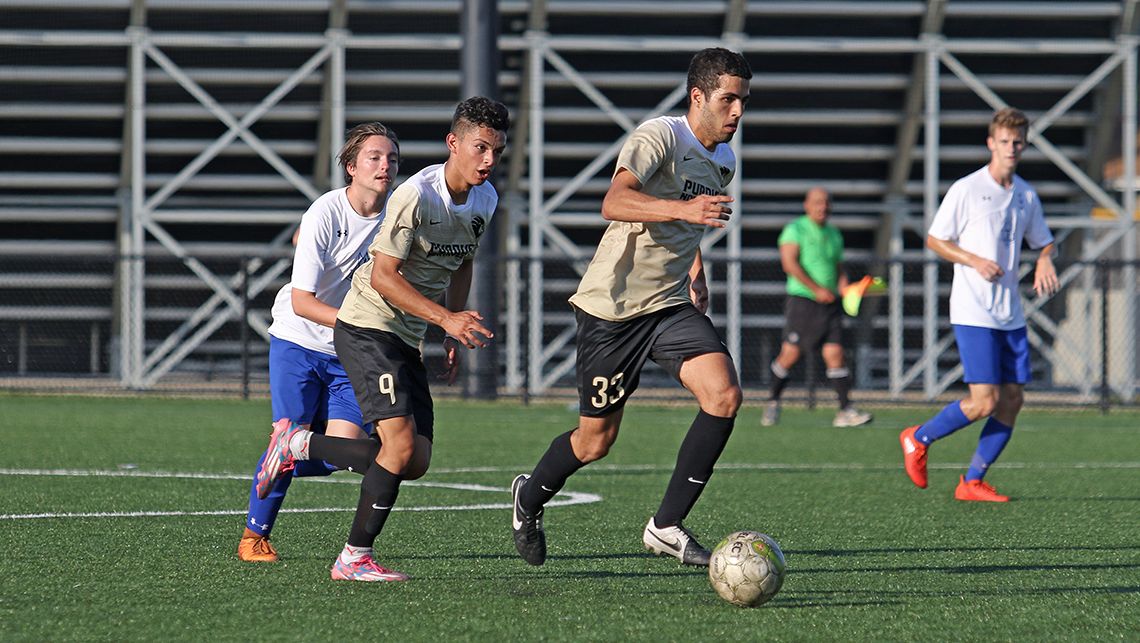 Purdue Northwest Falls at Cornerstone, 2-1
Tulio Ribeiro put the Purdue University Northwest men’s soccer team on the board first, but Pride were not able to hold off a strong Cornerstone (Mich.) squad in a 2-1 nonleague road loss Saturday.

Ribeiro (Itajuba, Brazil) netted his first goal of the year in just the 5’ of the match, when a pass from the left side from PNW teammate Chris Rassel (Saint John, Ind./Lake Central) led to a 1-vs-1 for Ribeiro, who beat the Golden Eagles’ keeper.

But Cornerstone (3-3) would strike back in the 17’, when Kevin Doornbos took a rebound off the post on teammate’s Josue Uquillas’ shot and put it in the back of the net to even it at 1-all.

The Golden Eagles would get the game-winner on an own goal just before the half, as a free kick sent into the box by CU was kicked in by PNW in the 32’. Both defenses would stand tall for the remaining half, as PNW keeper Miguel David (Spring Valley, Calif./Bonita Vista) stopped two more Cornerstone shots in the second half.

David would finish the game with three saves against 11 Cornerstone shots, five of them on goal.

The Pride recorded just eight shots for the game, three of them on goal, as Cornerstone keeper Tyler Watterwway finished with two saves.

Ribeiro accounted for all three of PNW’s shots on goal.

After both teams were evened at seven points a piece to start the opening set, the Black and Gold would go on a 5-0 run to take a 12-7 advantage.

PNW would continue to extend their lead, before picking up the Set 1 victory 25-18.

IU-East would answer back to win the next two sets, but the Pride would eventually even the match up after defeating the Red Wolves in Set 4.

The Red Wolves took a 15-13 lead midway through the fourth set, but the Pride refused to give up and battled to take a 20-19 lead thanks to a kill from Gabrielle Martin (DeMotte, Ind./Kankakee Valley).

PNW would capitalize on some miscues from IU-East, earning the 25-20 win and sending the match to the fifth set.

The final set was evened at five points each, but the Red Wolves would go on a small run to take a 9-5 lead.

Gabrielle Martin led the attack for the Black and Gold with 14 kills and 10 digs while senior Cami Webster (DeMotte, Ind./Kankakee Valley) notched 13 kills, 10 digs and one service ace.

Freshman Brooke Ahrens (Covington, Ind./Covington) led the squad with a team-high 26 assists and a pair of service aces to round out the Pride leaders.

The Pride would bounce back nicely in their final match of the day, starting off the opening set with a 14-11 lead.

Lawrence Tech would attempt to make a run, but the Black and Gold would hold off any come back efforts from the Blue Devils and come away with the 25-18 Set 1 win.

The next two sets were much like the first, but after the Pride took a 22-17 lead late in the third set, Lawrence Tech would battle back to even the score, 25-25.

A service error by the Blue Devils followed by a kill from Martin which propelled the Black and Gold to the 27-25 and earn the three-set sweep.

Martin once again led the attack for PNW with 14 kills while Brooke Ahrens tallied nine kills and a team-high 16 assists and five service aces.

The Black and Gold return to action Tuesday, Sept. 13, when they travel to Governors State University for a Chicagoland Collegiate Athletic Conference match up at 7 p.m.